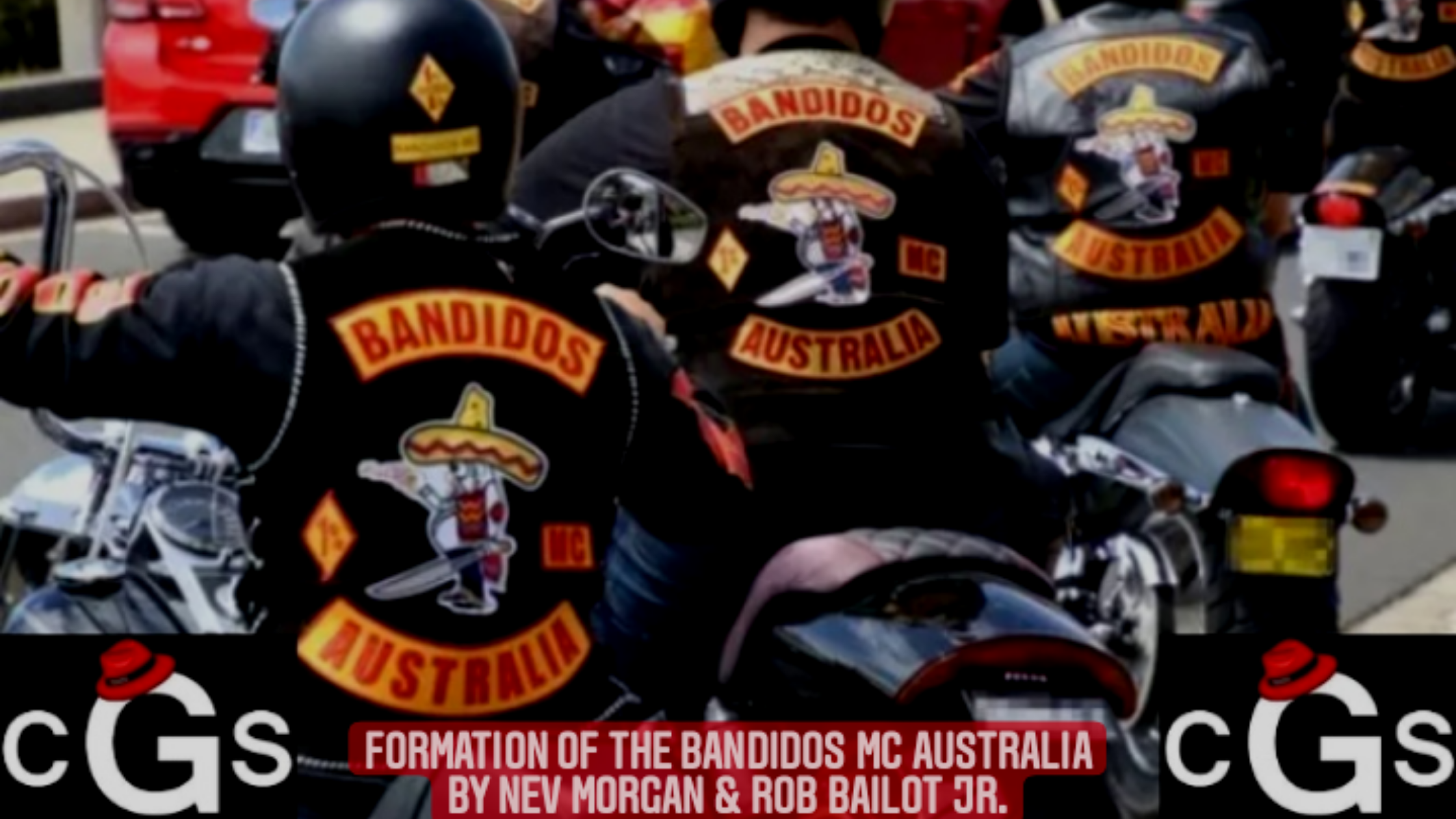 According to the government, 99% of motorcycle clubs are law abiding, the remaining 1% are not which is how they became known as the 1%ers. Among these 1%ers is the Bandidos Motorcycle Club. The Bandidos MC was founded by Donald Chambers in Houston, Texas, in 1966. When Chambers was convicted of two murders in 1972, Ronnie Hodge became the National President for the Bandidos Motorcycle Club. The Bandidos MC formed in Australia in the early 1980s due to an internal conflict in the Comanchero Motorcycle Club, between president William “Jock” Ross and his sergeant at arms Anthony “Snodgrass” Spencer. The Comancheros MC was founded in Sydney, New South Wales in 1968 by William George “Jock” Ross who chose the name after seeing the 1961 John Wayne film The Comancheros.

In late 1982, The Comanchero Motorcycle Club opened a second chapter, patched as the Sydney City Chapter and Spencer was named as President. It became evident a split was on the cards. Spencer had broken away from the first chapter after challenging Ross’ authority. Big name members moved with Spencer, as the new chapter could no longer deal with the military style demands under the leadership of Ross, so they began looking for alternatives. Two years earlier, Spencer was on vacation in the United States where he had met with the Bandidos Motorcycle Clubs National President, Ronnie Hodge. He remembered the mutual respect that was shown, so he contacted Hodge and received approval to form a Bandidos chapter in Australia. Spencer would become the first President of the Australian Bandidos.

News of the Comanchero Motorcycle Club Sydney City Chapter defecting to the Bandidos MC did not go over well with Ross. The new Bandidos members then incinerated their Comanchero colors in a ceremonial act. Clubhouse attacks and other violence continued until August when Campbell alleged that Spencer and Ross “declared war” in a phone call. It’s believed Ross found out the Bandidos MC were attending the Viking Tavern, in Milperra, Sydney, where a motorcycle parts swap meet was being held. It was September 2, 1984, Father’s Day in Australia. At 1pm Comanchero MC members were waiting in the parking lot of the Viking Tavern heavily armed. Approximately 20 minutes later the Bandidos Motorcycle Club showed up, also heavily armed. After a confrontation with Ross and Spencer, gunshots echoed and fighting began. Ten minutes later it was over and there were many casualties. Bodies were laying all over the parking lot. From that moment on, the Bandido MC name in Australia became infamous, and forever linked with what’s been named “The Milperra Massacre” which is also known as “The Father’s Day Massacre“.

Police believed the war began over turf or drugs or a combination of both. However, both clubs at that time had a strong no drugs policy and Colin “Caesar” Campbell, Sergeant-at-Arms of both Comanchero Chapters and Sergeant-at-Arms of the Bandidos after they were patched over, points to the acrimony of the split as the sole reason.

The shootout left twenty-eight wounded and seven dead. Among the seven dead were Leanne Walters, an innocent 14 year old bystander who died after being shot in the face. Also laying dead was Bandidos Vice President Mario “Chopper” Cianter, Bandidos Member Gregory “Shadow” Campbell, Comanchero Vice President Robert “Foggy” Lane, Comanchero Sergeant At Arms Phillip “Leroy” Jeschke, and Comanchero Member’s Ivan “Sparra” Romcek and Tony “Dog” McCoy. Anthony Snodgrass took his own life while awaiting trial over the events of the Miperra Massacre. Jock Ross received a life sentence for his involvement in the Milperra Massacre but only served five years and three months before he was released.

Much of these events are covered in the mini-series “Bikie Wars: Brothers in Arms” The Viking Tavern has since been renamed the Mill Hotel. Today, almost 40 years later, the Bandidos Nation has 45 chapters across Australia and is identified as among the big four bike gangs in Australia. The club actively recruits members from ethnic groups and has grown to up to 400 members in recent years.

3 Most Dangerous Casino Mobsters In History