The Good The Bad and the Really Bad 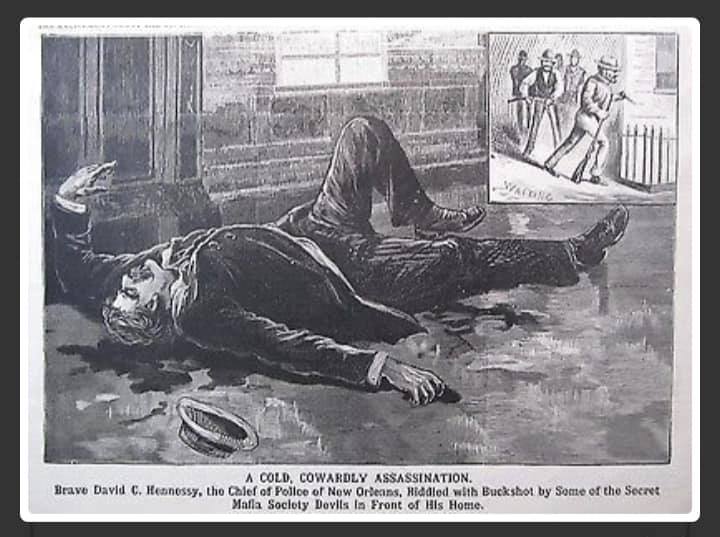 On that quiet Autumn evening when all nature seemed at rest

This good man was shot to death, may his soul rest with the blessed

For such Satanic fiends there should be no place but Hell

‘Tis not alone the murdered man who suffered by this crime

Chief Hennessey, he was murdered for no cause we all know

And the murderer, in prison he will pine

Why men have such a will, that for vengeance they can kill

Such men with Satan surely must combine

Oct 15 2020 marks the 130th anniversary of the assassination of the New Orleans Chief of Police.

David Hennessey Jr. was born in New Orleans to Irish parents Margaret and David Hennessey Sr sometime in 1858 at their home at 275 Girod Street. They had immigrated to New Orleans from Ireland in the 1840’s due to the potato famine ravaging their home country. David Sr. served as a Union Soldier of the First Louisiana Cavalry during the Civil War and after the war he became a member of the Metropolitan Police Force which was under the authority of the governors office and was considered an occupying force to most New Orleans citizens and southern sympathizers. His father was killed in 1869 by a fellow officer, Arthur Guerin, in a barroom shootout. Some say it was murder and some say it was self defense on the part of Guerin. Neither man really had a stellar reputation in either a personal or professional sense.

In 1870 at the age of 12 David Jr. became a messenger boy for the police force under Thomas Boylan who felt sorry for the Hennessey family and wanted to extend a helping hand to them. While still a teenager David caught two thieves in the act, beat them both and dragged them to the police station which impressed his co-workers and opened up his path to becoming a policeman for the city of New Orleans and he was a detective by the time he was 20 years old.

In 1881 Hennessey gained fame, along with his cousin Michael, for apprehending the notorious Sicilian bandit Giuseppe Esposito who was wanted for crimes, including kidnapping and murder, back in his native Sicily. The pair arrested him in Jackson Square while he was running the Provenzano faction of the Mafia who were controlling the NOLA fruit docks and stevedores. Esposito was extradited to New York and then to Sicily where he reportedly died in prison many years later. Some say this incident may have had an impact in 1890 on Hennessey, cold revenge being the reason he was killed.

In 1882 things took a turn for the worse for Hennessey (and his cousin Michael) when they were put on trial for the murder of fellow officer and their direct supervisor Thomas Devereaux. The Hennessey boys argued self defense and were acquitted. The shootout between Devereaux and the Hennessey’s (see Shootout on Gravier Street in the Crescent Corner) stemmed directly from the Esposito incident. He soon quit the police department and joined The Boylan Agency which had been given police powers by the city. He was head of security for the 1884 New Orleans World’s Fair and papers from New York commented on how superior Hennessey’s men seemed compared to the Metropolitan Police force.

During all these years an uneasy truce existed between the Mafia faction of the Provenzano’s and the Stuppaghieri faction of the Matranga’s but the rivalry would soon flare up between them when “Millionaire Charlie” Matranga extremely undercut the Provenzano’s on stevedore services for fruit importers. The Matranga’s were also backed by the successful businessman and fruit importer Joseph P Macheca who was involved in politics with the Democratic party and controlled a force of Italians called the Innocenti which numbered around a thousand members at one point. In 1888 Joseph A Shakespeare, a nominee of the Young Men’s Democratic Association, won election as New Orleans Mayor on a reform platform and appointed Hennessey as Chief of Police. Some versions of events have Hennessey aligning himself with the Provenzano faction as he considered them to be the lesser of two evils between the groups but in April of 1890 fighting broke out and members of the Provenzano faction were arrested by Hennessey after three members of the Matranga’s were seriously wounded in a shooting at the corners of Esplanade and Claiborne Avenues.

They were convicted in court but a judge later threw out the conviction as perjury was suspected on the part of the state’s witnesses. In the retrial set to take place in October of 1890 Hennessey was slated to testify, reportedly in favor of the Provenzano faction and with new information on the Matranga’s that he had received from files sent from Rome. The story goes that Hennessey had contacted his counterpart in Rome to see what information he could find on the members of the Matranga group and along with that found out information regarding Joseph Macheca. He had previously had a somewhat cordial relationship with Macheca but it turned sour after this. After his death no such files were ever found among his possessions however and Joseph Macheca was born in New Orleans which would have made it somewhat difficult for Italian authorities to have had files on him. Many believe that this situation is what brought about the assassination of Hennessey.

Close to midnight on October 15 1890 Hennessey was walking to his mothers house where he still lived on 275 Girod St. With him was Captain William O’Conner. The two men had enjoyed a late night meal together after leaving work at the police station and then started making their way home.

They parted ways about a block from his Hennessey’s mother’s house. Shortly after that two shotgun blasts and several revolver shots shattered the silence of the night. Hennessey had taken two blasts to the midsection but had managed to get off several shots from his revolver to his assailants, apparently missing with them all.

In addition, there was an officer assigned to watch Hennessey’s house who participated in the gun fight. Officer Roe, a Boylan Agency man, stated that he saw the ambush clearly. As he was standing at the corner of Girod and Basin streets he was watching a man approach from Rampart Street in light clothing when he saw three men emerge from the gateway of the Peterson shanty (one of the soon to be accused Italians lived in this small dwelling, Pietro Monasterio, a shoe cobbler) with shotguns and a pistol.

They opened fire on the man in the light clothing who ran and took cover while returning fire. Roe said he realized the man in light clothing was Hennessey and he ran into the street with his pistol drawn but it jammed and buckshot nicked his earlobe.

The popular version of the next events goes like this: After hearing the shots Captain O’Conner runs back to find his friend dying in the street and just before he gasps his last breath he whispers to O’Conner “The Dagos did it”. In fact O’Conner did run back and found him, along with others, but he wasn’t close to death yet. They managed to get him to Charity Hospital where he lay in a semi conscious state until the next morning of October 16 when he died around 9 AM. Other versions have it that he whispered those into O’Conner’s ear while he lay in bed. Even though he was awake enough at times to converse with people he chose that moment to whisper in one person’s ear. The other, more believable version IMO, is he never named his assailants and, believing he would fully recover, stated he knew who was responsible and would settle the matter with them once he was on his feet again.

O’Conner and Roe were never called to testify at the trial that would take place in February 1891. When asked by a reporter why he wasn’t at the trial Roe replied with:

“I was not summoned as a witness. The state probably just forgot me altogether”.

The aftermath of Hennessey’s murder would bring about one of the most shameful incidents in New Orleans, Louisiana and America’s, history. (see A Few Days in New Orleans in the Crescent Corner).

Ronald Rawson
Ron Rawson, has held an interest in the Italian Mafia, for over 20 years. After moving to New Orleans in 2012, he decided to pay particular attention to the rich OC history that the Crescent City has to offer, and he began sharing his NOLA findings on his Crescent City Mafia, Murders and Mysteries, Facebook page last November.

"I'm always learning something new," he says. "Often when I think I have the whole story down on a subject, some new bit of info will pop up and lead off into another interesting direction."

Among the tales of pirates, voodoo priestesses, and vampires, New Orleans holds a long Mafia history. Most people will automatically think of Carlos Marcello, as the father of the New Orleans Mafia. Most people will also assume that the first Mafia family was in New York City. Even many locals don't know that New Orleans has Mafia roots predating the Civil War, giving their wonderful city the distinction of being home to the first Mafia family in the United States.

So let's explore the lesser known stories, facts, and even some OC fiction in a little space of the NCS Ron calls, the Crescent Corner.

Jack ‘Legs’ Diamond: Was He The REAL Teflon Don?