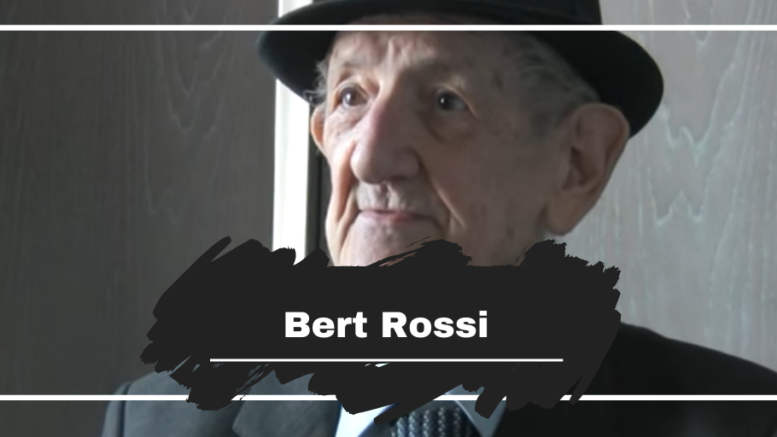 On September 28th, 2015 the NCS had the pleasure of speaking with Mr. Bert “Battles” Rossi on the telephone, he was a well-spoken, polite, and intelligent man who was not only a Mafia boss in London during the 1950’s – 1980’s, but he was also a mentor to the Kray Twins and a Gambino Associate.

Sadly, on 2nd July 2017 Mr Bert Rossi passed away at his home in London

Now at the age of 94 Mr Rossi is still on the ball, alert and quick minded as he has ever been. During the call we were given the opportunity to post some rare photos and talk more about the man that they call the General of Clerkenwell.

During Bert Rossi’s time he had met with the likes of Angelo Bruno and other mob bosses from the US in efforts to expand their reach to England and Europe. In one particular case Bert Rossi had helped Meyer Lansky in acquiring the Colony Sports Club in London which would become a gambling casino that was operated by both Meyer Lansky and Angelo Bruno, using George Raft as the frontman. The photo above was taken in Atlantic City and shows Bert Rossi standing next to Big John Berkery, Berkery was a street-toughened, debonair man, who was clever and cunning. He was also the boss of the K&A Gang (an Irish American network that was based in Philadelphia), these days they are currently known as the Northeast Philly Irish Mob. Berkery had close ties with Philadelphia’s Mob Boss Angelo Bruno which helped the gang expand into other rackets as well as enabling them to gain footholds in other territories in the Philly area.

It was also said that Berkery was the guy who put out the contract on Phil Testa’s head in the 1980 assassination of the Philly mob boss. The next rare photo that I was sent consists of Bert Rossi, John Berkery and a capo from the Philadelphia crime family, again taken in Atlantic City. Berkery was a central figure in the 1959 Pottsville Heist which saw nearly $500,000 stolen from a safe in the home of Pottsville coal baron John Rich.

Atlantic City during the 60’s saw a record numbers of tourists because of great weather, an airline strike and the end of the New York World’s Fair.

The newly opened Atlantic City Expressway and Cape May-Lewes Ferry made it easier to get from Philadelphia and other East Coast cities to the Boardwalk. This meant owners of Atlantic City’s finest restaurants, such as the Knife and Fork Inn, Jack Guischard’s and The Strand, shared in the prosperity with a steady stream of customers.