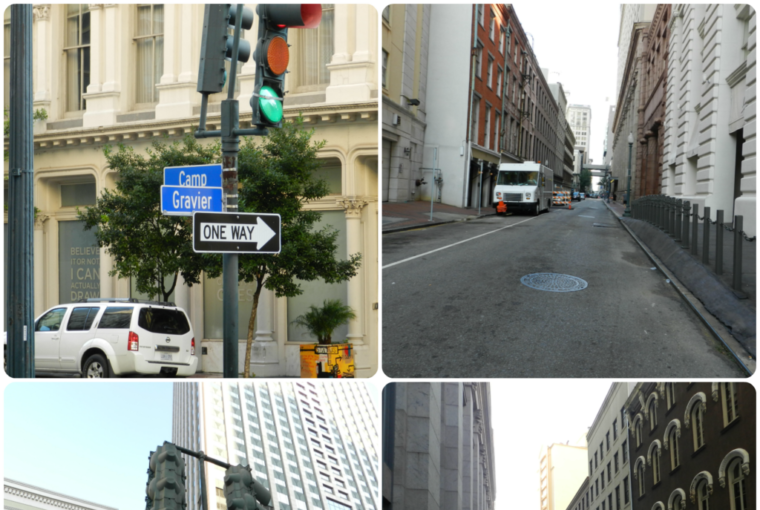 Area of Gravier St. between Camp and St. Charles St's where the Devereaux/Hennessey shootout occurred in 1881.

Jonathan was six years old and standing with his mother on Gravier Street in New Orleans. He was bored. Mother was talking with one of her friends on the banquette. They were talking about another lady that his mother knew and although he didn’t quite understand all that they were saying about her he didn’t think that mother and her friend liked the lady very much. Mother saw her friend while they were out running errands and doing shopping for father’s birthday which was only a couple days away. He always got bored when he went out with mother and she saw her friends. She would spend what seemed like forever talking to them.

He wanted to go home and look at the book about Billy the Kid that father had given him. Although he couldn’t understand everything written in it he liked the drawings of the gun battles and adventures of Billy and his gang.

He had heard that Billy the Kid had been killed a few weeks back but he didn’t believe that. As he looked down the street to the corner of the another street he saw two men come around the corner and head their way. He saw a pistol hanging to the side of one of the men and wondered if they were cowboys like in his book.

A few moments before Jonathan saw the two men that might be cowboys Thomas Devereaux stepped into an office on Gravier St. “I’ll be right with you Chief Devereaux. Just finishing up on this order here.” The man he addressed grunted a “Fine” and was silent. A moment or two later John Fairfax heard Devereaux exclaim “That son of a bitch!” and looked his way in time to see a drawn gun and hear the first shot before he dropped to the floor behind the counter.

Patrolman John Logan was walking his beat on Camp Street thinking about the woman he had recently met. He couldn’t get his mind away from her for long actually and already had thoughts of possible marriage. He thought that she felt the same towards him but he wasn’t sure. When he saw the famous pair of Hennessey cousins his mind briefly cleared of thoughts of her. The Hennessey boys were well known throughout the city for the recent capture of the Sicilian bandit Joe Esposito and though there was controversy surrounding it many in the force respected the Hennessey boys. John was one of them. Michael Hennessey spotted the patrolman and though they were too far away to speak they each waved a hello to each other just before the pair rounded the corner onto Gravier St.

Jonathan saw the cowboys stop for a second, speak to each other and then one of them went into a building near where they were. The other started to walk again towards him and mother who was still talking with her friend about the lady. He wished that they would finish.

“Hello Fred” David Hennessey said as he entered the shop. “How are you today David” Fred replied. David Hennessey had been getting his haircuts and shaves at Fred’s barbershop for years now. “A good day today” he replied as he sat in the barber’s chair. “Just a shave today Fred. How’s your family doing?”.

On the floor above the Fairfax Brokerage a man was finishing up some notes on a case he was working on. He was just thinking that the man who he had an appointment with should be arriving at any minute when he heard shots which sounded like they were right below his open window. He could smell burnt gunpowder before he got to the window to look to the street below. When he did look he saw the man he had an appointment with lying in the street with blood running from his head.

Jonathan was re-thinking his idea about the man who he thought might be a cowboy. Even though he had a gun hanging from his hip he didn’t look to be dressed as the cowboys from his book. He heard mother’s friend say “There’s Michael Hennessey” and looked up at his mother as she turned her head to look in the direction of the man who might not be a cowboy after all. As he looked to her he heard some very loud noises behind him. Startled he turned around to see the man fall to the street bleeding. He heard mother and her friend scream and felt mother grab his shoulder and pull him towards her. He watched transfixed as the other cowboy ran towards the store near them and disappeared into the store as another man walked from the same store and slowly raise a pistol towards the man laying in the street. Maybe they were cowboys after all he thought. His mother covered his eyes just a second before the final shots of the battle rang out but he could hear mother and her friend scream again and exclaim “Jesus have Mercy!”.

At the time of the Joe Esposito capture on July 5 1881 Chief of Aides Thomas Devereaux was the direct superior to Michael and David Hennessey but the three had a long standing rivalry and hatred of each other stemming from years before when Mike was arrested by Devereaux for theft. Hennessey escaped punishment but had since suffered in reputation. Devereaux had ordered the cousins to leave off the Joe Esposito investigation but the two would not have it and after colluding with Dave Hennessy’s friend and mentor, Chief of New Orleans Police Thomas Boylan, they took vacation time to conduct the capture of Esposito.

“If it’s any satisfaction for you to hear, or the Hennessey’s to know, if they down me in this thing I’ll blow the tops of their heads off”.

The board met on October 12 to consider charges of Oppression in Office, Conduct Unbecoming a Peace Officer and Drunkenness on Duty. They swiftly found him guilty of the Oppression in Office charge but decided to re-convene a week later to consider the other charges. The meeting of the board the following week would prove unnecessary. The day after, on Thursday October 13, at eleven thirty in the morning Devereaux was in the brokerage house of John W. Fairfax on Gravier St.

He stood at the counter which was just inside the double glass paned front doors which were separated by a huge iron column. Shortly after Devereaux’s arrival at the Fairfax office the Hennessey cousins turned onto Gravier St. from Camp St. David Hennessey split up with his cousin a few doors shy of Fairfax’s and went into a barbershop. Mike Hennessey claimed to have been arriving for an appointment with Michael Farrell who ran a private police agency from the second floor of the same building that the Fairfax brokerage was in. Possibly, probably, Mike Hennessey saw the image of a man drawing a gun inside the glass doors and quickly drew his as well. Hennessey’s shot followed quickly on the heels of Devereaux’s but the first shooter found his mark while the latter did not. Hennessey was hit twice, in the face near his mouth and in the midsection before he dropped to the street. Hennessey fired three times, two shots passing through the glass of the front door and one lodging in the wooden doorframe. At the sound of the first shot David rushed from the barbershop with his Colt revolver drawn and quickly advanced on the Fairfax office.

Devereaux slowly opened the right hand door to step onto the street raising his Tranter revolver to finish Mike Hennessy off but when he stepped out from the doors he didn’t look to the left or right of him in the street. His attention was focused on Mike and apparently it didn’t occur to Devereaux that David would be nearby. Big mistake! David had managed to sneak into the left hand door of the Fairfax Brokerage and come up behind Devereaux and fire a shot from within a foot of his boss’s head. The bullet entered behind the left ear and lodged in his forehead. David ran out to his cousin and helped him into a sitting position. As he did this Mike fired another shot towards the body of Devereaux.

A patrolman who heard the shots, John Logan, arrived at the scene as David was helping his cousin up. They got into a cab and took Mike to Charity Hospital. In the meantime Fairfax had dragged Devereaux back into the doors of the office and placed a bundle of newspapers under his head. A doctor arrived a few minutes after the shooting but Devereaux was mortally wounded and died a short time later. The Hennessey cousins were arrested, along with patrolman Logan, for the murder of Devereaux. Logan was quickly freed within a week but the Hennessey boys went on trial for murder in April. However with a stream of distinguished citizens, law enforcement figures and the well known and public threats Devereaux had made the cousins were found not guilty on April 27 1882.

Mike Hennessey would soon after leave for Texas and be killed five years later by an unknown assassin. There’s some speculation it could have been Mafia related in retaliation for his part in the Esposito incident. David would die a decade later in New Orleans’ most controversial case in history. Though the Mafia would be blamed for the murder of David there was, and still is really, speculation that someone may have finally taken revenge for the death of their friend Thomas Devereaux.

And by the way, Billy the Kid was killed just a few days after the capture of Joe Esposito in New Orleans on July 14 1881. If you believe that version of events.