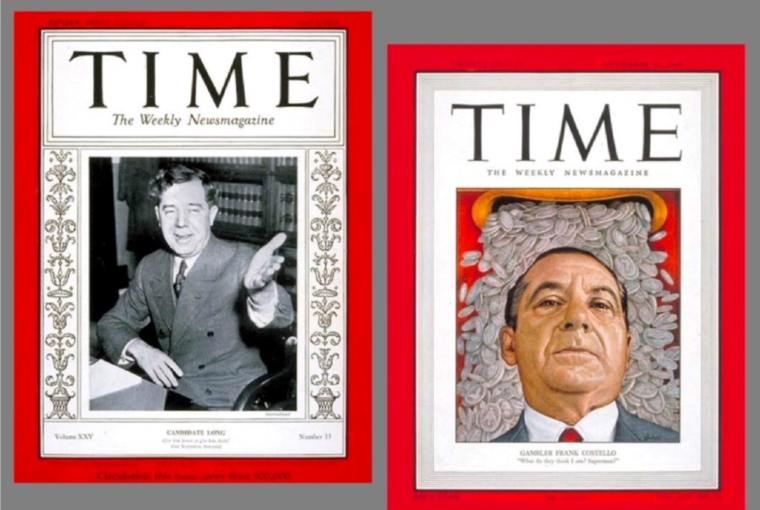 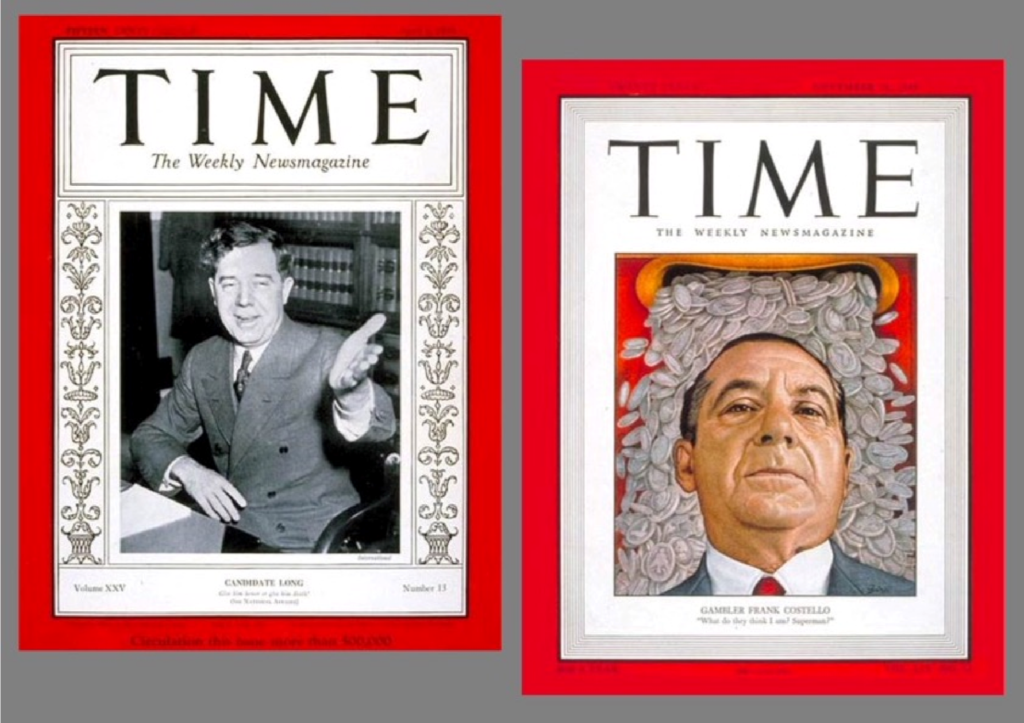 Never let the truth get in the way of a good story.

That’s true crime story teller, Gary Jenkins advice. I happen to whole heartedly agree. Mob myth has had some doozies over the years, and like fish tales they tend to get bigger and better as time goes by. Here at the Crescent Corner, we wanted to answer a question ‘Crazy’ Joe Gallo, was overheard asking on a wiretap:

Who gave Louisiana to Frank Costello?

As you’ll see, the ‘who’ part is pretty clear, but the ‘how’ gets a little fuzzy. I know of three different stories about how the ‘Prime Minister’ inherited an interest in the Crescent City. Which of them, if any, is true I cannot say, and will leave it for the reader to decide.

As many readers will no doubt already know, Louisiana Senator, Huey Long, was a notorious boozer. This story claims Long was so drunk at a country club one night he got impatient waiting at a urinal, and let loose between the mans legs who was using it. Apparently, he had terrible aim and the man began stomping a hole in Huey. An attendant called for Frank Costello, who was also at the club, and Frank, as always, smoothed things over. Long was grateful, and the two struck up a mutually beneficial friendship.

New Orleans legend, Diamond Jim Moran received a phone call from Frank Costello, warning him of a plot to assassinate Huey Long, at the Roosevelt Hotel. Diamond Jim, passed this information on to his friend Long, who’s bodyguards immediately raided the residence at an address Costello had provided. Though they did not find their suspects, they found evidence that a plan had indeed been put in the works. Long told Moran to pass a message on to Costello, and the message was, “tell him he has a friend.”

In a much less dramatic, though likely more accurate telling, Frank Costello himself insisted he had met Long over dinner at a country club. Both men had a penchant for politicking, gambling and chasing women. The two simply liked each other and struck up a friendship which lasted until Long’s death.

So I suppose the answer to Joe Gallow’s question would be, Huey Long. He would invite Costello to bring his slot machines to Louisiana in 1935, and the pair would prove to be a successful partnership; but that is another story…

Carmine Persico: Born On This Day in 1933