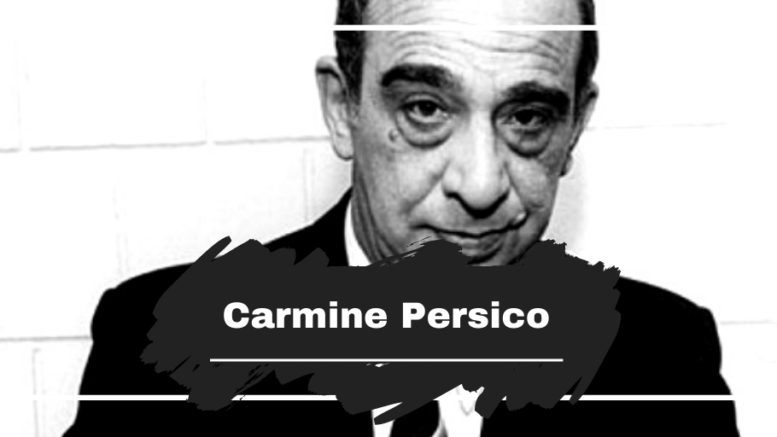 Carmine John Persico Jr. was born on the desolate streets of Red Hook, Brooklyn, on August 8, 1933. The neighborhood struggled through the Great Depression, however Persico’s father working as a legal stenographer, brought home a steady pay check, however Persico idolized the Mafia, they brought home wads of cash had a pretty woman on their arm, something that Persico wanted for himself.

Persico was only a small teenager joining a local gang called ‘The Garfield Boys’ his savage side saw him kill a teenager of a rival gang during a street brawl with his bare hands, this undoubtedly caught the eye of local mobster ‘Frankie Shots’ Abbatemarco, a member of the Profaci crime family.

Joey and Persico got their chance to become fully pledged members of the Profaci family after the murder of legendary crime boss Albert Anastasia carried out by Joey.

The Gallos and Persico planned a revolt after finding out that Joe Profaci was taking too much money from people lower than him in status, however Profaci offered Persico more money resulting in Persico betraying the Gallos, a full on family war broke out, Larry Gallo was nearly strangled to death by Persico, this earning Persico the nickname ‘The Snake’ Persico was also targeted on several occasions however he came out on top with Crazy Joey being sent to prison, Profaci dying from cancer.

The 1970s had arrived and Perisco was pulling in more cash than ever, however he was to face 8 years in prison due to a truck hijacking charge, this avoiding him another round of violence as Joseph Colombo the new boss at the time was shot and put into a coma, Perisco was voted new boss of the Colombo family.

He soon enough put a hit out on Joey Gallo, killed as he was celebrating his 43rd birthday.

As the new boss of the Colombo family Persico ran into trouble a few times, immediately so after he was released from prison.

In New York a criminal trial, known as the Mafia commission trial was set up using evidence found from the FBI, eleven organized crime figures including Paul Castellano, Anthony Salerno, Anthony Corallo and of cause Carmine Persico himself stood trial for things such as murder for hire and racketeering.

Perisico tried to represent himself at the trail but was unable to escape the government and was sentenced to 100 years, pretty much a death sentence. Behind the prison walls Perisco tried to maintain control of his family he handed over power to his son Alphonse.

In 1999 Alphonse was sent to prison on a gun charge, Persico feared that William ‘Wild Bill’ Cutolo might attempt to wrest control of the Colombo family away from the Persicos, so Persico had to eliminate him Wild Bill was murdered in Brooklyn, Cutolo’s son, Bill Jr., was so dismayed by his fathers murder, that he cooperated with the FBI and ultimately helped bring down Alphonse, getting him sentenced to life in prison.

Persico reamined head of the Colombo family, until March 7th 2019, when he died aged 85.