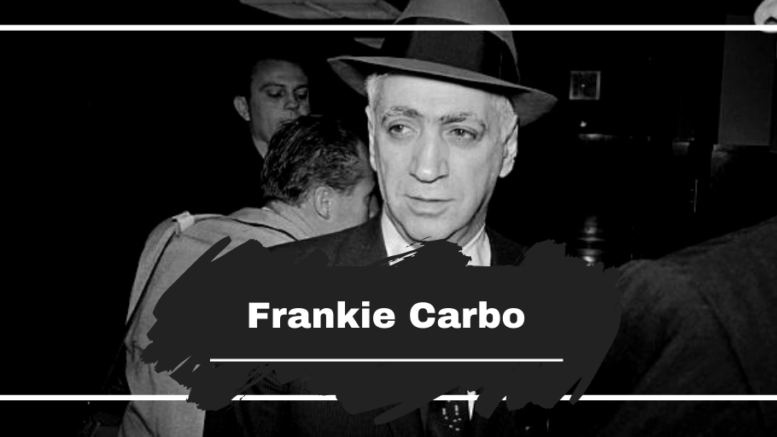 Born Paolo Giovanni Carbo on August 10th 1904, Frankie Carbo was sent to the New York State Reformatory at age eleven. Over the next ten years, Carbo would be in and out of prison on charges including assault and for having his personal property valued above a legally specified amount and finally he was arrested for the murder of a taxi driver who refused to pay protection money.

Carbo claimed not guilty due to self-defence.

He eventually agreed to a plea bargain of manslaughter and in return he got a reduced sentence of two to four years. After serving 20 months in prison, Carbo was released.

On release Carbo began working as a hired gunman for several contraband gangs.

In 1931, Carbo was charged with the murder of Philadelphia’s Michael ‘Mickey’ Duffy, Carbo was once again eventually released.

After his umpteen release Carbo began working for Murder Inc., under boss Louis ‘Lepke’ Buchalter, again he was arrested for the murderers of bootleggers Max Greenburg and Max Haskell, he was held for 6 months but released when witnesses refused to testify.

In 1939, Carbo was a prime suspect in the murder of informant Harry ‘Big Greenie’ Greenburg, This time, former Murder Inc. members Abe ‘Kid Twist’ Reles and Allie ‘Tick Tock’ Tannenbaum agreed to testify against Carbo. Unfortunately, before the trial began, Reles, who was under police protection, fell to his death from a window of the Half Moon Hotel in Coney Island.

His death was ruled a suicide, and the case against Carbo was eventually dismissed.

Carbo had been arrested 17 times by the end of the 1930s, he had been charged with more than five murders. In 1947, it was rumored that Carbo had engineered the Benjamin ‘Bugsy’ Siegel’s murder in Beverly Hills.

He was Granted early parole due to ill health, He died in Miami Beach, Florida on November 9, 1976.