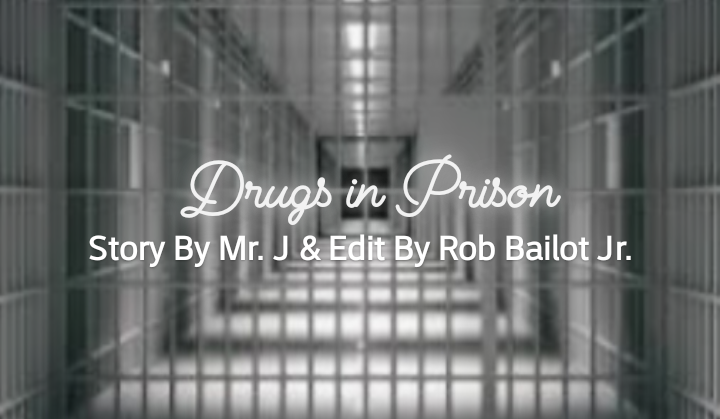 For some that are incarcerated drugs can be a way to escape from your thoughts and feelings. They can be a temporary reprieve from the monotony of every day life. For others it can be a lucrative way to make money and gain some level of respect. For many, however, drugs can be both. Either way it is a very dangerous game to play.

The most common drugs that I have seen while incarcerated are meth, pills, weed and K2. I have had friends that have made thousands and thousands of dollars every month off of just bud. They generally make more money than the COs yet they assume a great risk. I recently found out that a good friend of mine, who has been in prison for the past couple of years, was recently brought back to the county jail to be charged for distribution of meth while in prison and if convicted he will probably have years added to his sentence. Depending on what they are caught with and how much others can either face a disciplinary write up and have certain privileges and good time taken away or they can be brought to the county jail, like my friend, and face free world charges.

The Price of Drugs in Prison

In prison, drugs are much more expensive than in the free world. It varies from facility to facility but depending on how prevalent they are it can range from five to twenty times the cost of what you would pay for on the street. For instance a single 8mg Suboxone pill or strip that would cost somebody on the street about $10-15 would cost anywhere from $50-300 while in prison. A tenth of a gram of good weed can go for between $10-50. A tenth of a gram of meth, or the top of a small toothpaste cap, can go for between $30-100. A postcard that has been sprayed with K2 can go for over $1000. These are just the prices that I have seen and I’m sure that in different states and facilities the prices can either be higher or lower depending on a number of factors.

As with any business you have to make sure that your customers not only pay you but do so at the time that it’s due. If you let someone get over on you then it’s considered a major sign of weakness and you will never be able to have anything for yourself. If you don’t pay your debt then expect to have to fight for your life. Depending on if it’s just an independent individual that you’re dealing with or if it’s someone affiliated with a gang then you could either be fighting on a regular basis until the debt is paid or they could go ahead and just kill you. Some are more ruthless than others. For instance one guy that had ran up a debt of about $100 with a friend of mine was beaten so bad they had to put him in the hospital for almost a week. He now permanently looks like Frankenstein. I saw one guy get beaten and stomped in the face over 2 little cigarettes. Cigarettes!!!! Not even drugs but tobacco.

The 4 Main Ways of Getting Drugs Into Prison

There are four main ways to get drugs into a facility. Depending on the custody level of the prison certain ways are easier than others. I was generally in low to medium custody facilities so I will just talk about how it worked where I was at. The first and most common is through the guards or other people employed at the prison. The guards don’t make a lot of money and a lot of them are willing to bring a package in for a few hundred dollars. They will generally meet somebody on the street who will give them a package to bring into the facility. The guard will then hide the package until it’s time to bring it in and deliver it. Most facilities have body scanners now though but there are ways to get around them. The second way in which they are brought in is through inmate workers or trustees that either leave the facility to go to outside work details or work in the kitchen. For this method a prisoners people on the street make a “drop off” at a designated location and the “packer” will pick it up when they go outside of the facility for their work detail. For kitchen workers sometimes there will be a “special” package hidden in the boxes on the food truck. They will then “suitcase” however much they are bringing in that day by wrapping a small package in electrical tape, lubing it up and then sticking it in their ass. “Knuckle deep and it’ll keep” is what we always told the Packers so it would fall out while being strip searched. The third way is through using drones or getting packages tossed over the fence. A lot of facilities have drone detectors/blockers now so the drones are harder to use. If a person on the street is bold enough then they can put a package into a basketball or football and toss it over the fence. In my opinion this is the riskiest way of doing it and has the greatest chance of getting knocked off. The fourth and final way that I have seen to get drugs in is through the mail. This way isn’t as common anymore as the guards started checking the mail more thoroughly and in some places have only been giving a copy of the original mail. This method generally only worked for small things such as Suboxone strips or letters that have been sprayed. I’m sure there are other ways but these are just the ones that I have seen.

Drugs are a very risky business to get involved in while incarcerated. If you’re hustling them then you assume all of the risks that go with it whether it’s getting searched, having to fight to keep what’s yours or getting knocked off before they get to you. If you’re buying them then you have to toe the line between using them recreationally, such as weed, or turning into a junkie as with pills.

How to Buy the Best CBD Online from the UK

Do You Really Need to Pass AZ-304 Test and Get Its Related Certification? This Will Help You Decide