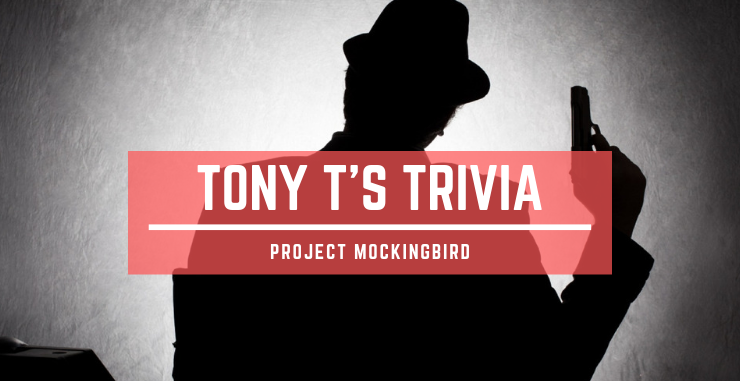 Not only in America, but worldwide. What ‘T’ don’t know, ain’t worth knowing.

You’ll know, because he’ll want you to know.

Project Mockingbird, a telephone intercept activity, was conducted between 12 March 1963 and 15 June 1963, and targeted two “Washington based newsmen who, at the time, had been publishing news articles based on, and frequently quoting, classified materials of the CIA and others, including Top Secret and Special Intelligence.

Telephone intercept connections were installed at the newsmen’s office and at each of their homes, for a total of 3. The connections were established with the assistance of a telephone company official who responded to a personal request by the Director of Security, Col. Sheffield Edwards: Col. Edwards’ authority for the activity was Mr. John A. McCone, Director of Central Intelligence. The latter conducted the activity in coordination with the Attorney General (Mr. Robert Kennedy), the Secretary of Defense (Mr. Robert McNamara), and the Director of the Defense. Intelligence Agency (Gen. Joseph Carroll), In addition to Office of Security personnel directly involved in the intercepts and research of materials acquired therefrom, only 3 other Agency officials are on record as witting of the activity: the Deputy Director of Central Intelligence (General Marshall. Carter), the Inspector General (Lyman Kirkpatrick) and the General Counsel. (Mr. Lawrence Houston).

The intercept activity was particularly productive in identifying contacts of the newsmen, their method of operation and many of their sources of information. For example, it was determined that during the period they received data from 13 newsmen, 12 of whom were identified; 12 senators and 6 members of Congress, all identified; 21 Congressional staff members, of whom 11 were identified; 16 government employees, including a staff member of the White House, members of the Vice President’s office, an Assistant Attorney General, and other well-placed individuals. A number of other sources were partially or tentatively identified, but the short span of the activity precluded positive identification. It was observed that through these contacts the newsmen actually received more classified and official data than they could use and passed some of the stories to other newsmen for release, establishing that many “leaks” appearing under other by-lines were actually from the sources of the target newsmen.

Since the termination of Project Mockingbird, those materials related to it which were retained, have been maintained under strict security access of two Office of Security professionals.