The feted meeting at the estate of Bufalino crime family boss Joseph Barbara is considered to be the event that finally triggered J Edgar Hoover and his agents into action. What became known as the Apalachin meeting took place on the 14th November 1957 in the rural town of Apalachin in the county of Tioga, New York. However, concerning the implied importance of Apalachin what damage was done to the Mafia?

The ‘Top Hoodlum Program’ suggested by some to have been created after Apalachin was formed and launched several years before. It was officially launched on the 25th of August 1953. The FBI themselves state,

“We immediately checked the names taken by Croswell. We had information in our files on 53 of the 60 mobsters; forty had criminal records. Croswell’s discovery led us to intensify our interest in these figures (not begin it, as some have speculated) and to arrest mobsters who violated federal law. In part because of Apalachin, we realized that local and regional crime lords were conspiring and began to adjust our strategy accordingly.” (FBI, 2007)

The ‘Top Hoodlum Program’ was also not the first time the FBI tried to map the Mafia landscape. In the FBI Chicago office, in 1946, the first nationwide intelligence-gathering program was launched. The General Investigative Intelligence Program gathered information on, among others, individual Mafiosi. Those who as a consequence of being at Apalachin and were charged and found guilty of an offence, virtually to the last man, had their convictions quashed at subsequent appeals.

Some say Lucky Luciano, Frank Costello and Meyer Lansky conspired to use Apalachin to set Vito Genovese up. One reason given is that staunch supporters of the three were either not invited or didn’t attend. But why would they risk it?

In 1932 special agent B. E. Sackett of the Chicago FBI wrote an internal article on “organized crime conditions” in Chicago. In the article agent Sackett wrote about how Chicago agents through informants and other contacts had built an extensive library of intelligence on over “three hundred of the notorious criminals and members of their gangs”, with the FBI later commenting “the picture of the underworld would grow in the coming years and yield significant results for the young Bureau and its partners” sharing a few examples as they did so.

Two of which were as follows:

“In August 1933, we prepared a detailed analysis of organized criminals and the various ways law enforcement had succeeded in stopping them. We outlined more than a hundred “rackets” in Chicago that extorted money from electric sign companies, “candy jobbers,” dental labs, and others. This analysis helped paint a picture of the threat for all of law enforcement.

When John Dillinger was on the run for a violent string of bank robberies, we put pressure on the many connections he and his gang had to all levels of the underworld—precisely because we had mapped out these connections. With the extensive cooperation of many police forces, this allowed us to track his movements and ultimately generated the leads that led to his death in a shootout outside a Chicago theater in July 1934.” (FBI, 2007)

The Chicago office was at the forefront of fighting organised crime, however, it was a request from the New York office in 1953 that would lead to the creation of the Top Hoodlum Program in August.

“In 1953, the New York office—facing rising mobster activity—specifically asked to open intelligence files on 30 top hoodlums in the city to get a general picture of their activities and to keep an eye out for violations of federal law. On August 25th of that year, we made it an official national “Top Hoodlum Program,” asking all field offices to gather information on mobsters in their territories and to report it regularly to Washington so we’d have a centralized collection of intelligence on racketeers.” (FBI, 2007)

In records I received as part of a freedom of information request, reference is made to the ‘Top Hoodlum Program’ concerning Vito Genovese who was also the subject of the General Investigative Intelligence Program launched by the Chicago office in 1946. All in a memo to the director of the FBI, J Edgar Hoover dated the 23rd November 1953. 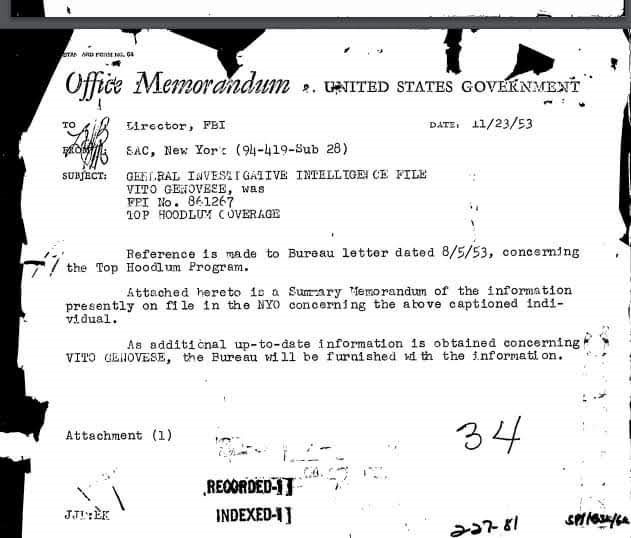 No doubt Hoover had his reasons for publicly denying the Mafia whilst being fully briefed on their activities around the nation, ones he has probably taken to his grave and we will never know.

Although no mention is made of the Mafia, Hoover certainly knew of Vito, as the following pair of images from Oct/Nov 1944 show (even if he couldn’t spell his name right). 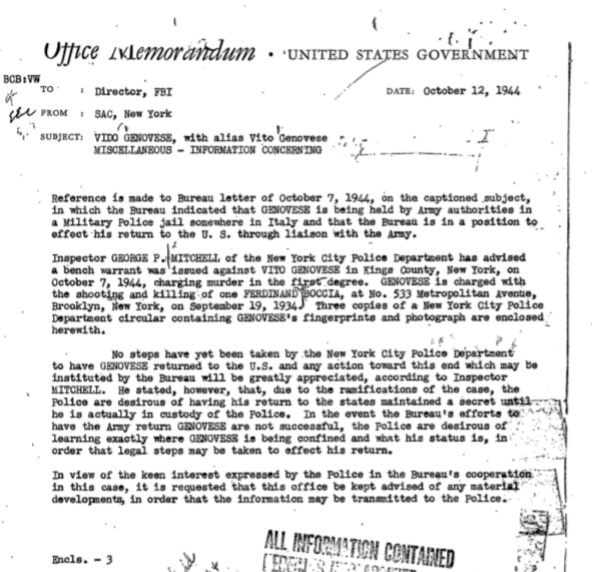 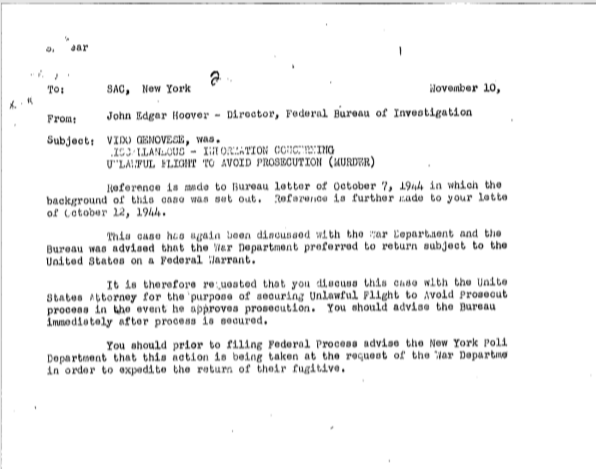 However, as the following image shows four years after the above situation Hoover had information on several interesting individuals, including Vito (with his name spelt correctly this time). 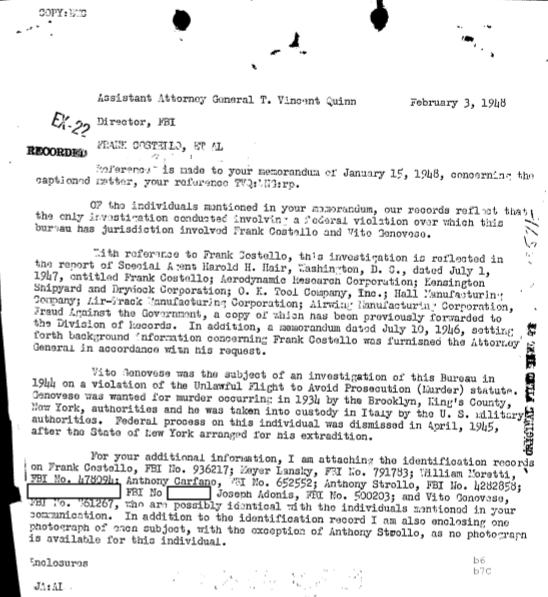 I have found that the events at Apalachin created more questions than it provided answers. The ‘Outfit’, especially in 57, had control of Chicago. Sam Giancana is said to have offered Chicago as the place to have such a meet and very much had the ‘I told you so’ attitude following the events at Barbara’s estate. So, why was Giancana’s sensible suggestion turned down? Especially, when the events of 1956 and the arrest of Carmine Galante et al would have or should have placed a red flag on Apalachin. I believe that the FBI was well aware in advance of the upcoming meeting on that fateful day and Sgt Croswell’s story is just that, a story.

At around 10.00 pm on the evening of October 18th, 1956, Carmine Galante was stopped by a New York state trooper for speeding. In the car, which was owned by and registered to Anthony Calendrillo, were Galante, Frank Garofalo and one other. Galante gave the trooper a license that belonged to Joseph Di Palermo and when he couldn’t give the correct date of birth Galante was arrested and taken to the local Binghamton police station where he was positively identified as Carmine Galante and charged with 3 offences: speeding, unlicensed operator and unauthorized use of another’s license.

Shortly after Galante’s arrest, Joe Lanzini the owner of a company called Abco Vending Machine Company sent West New York Police Captain Chris Gleitsman to Binghamton in an attempt to get “one of his salesmen out of jail”. Gleitsman had admitted this in a 115-page testimony given to the New Jersey Law Enforcement Council’s inquiry which had been running for six years and was investigating activities of racketeers. It was during this inquiry that the bribery attempt by two West New York police officers was uncovered. One of whom was Chris Gleitsman, his accomplice was Sergeant Peter J. Policastro. They had driven down to Binghamton and offered a bribe of $1,000 to a New York state trooper to keep Galante out of jail. The state trooper was none other than Sergeant Edgar Croswell. Croswell refused the bribe and the two officers were arrested. However, the buck didn’t stop with Gleitsman and Policastro.

On October 22nd, the FBI received information that Galante, Garofalo and others were in Binghamton to meet with Joseph Barbara. Further investigations revealed that Barbara had made reservations for five men at the Arlington Motel in Binghamton for the 18th October. The FBI report describes Barabra as “he is a man with a lengthy criminal record, including an arrest for homicide, and is known to control all of the area racketeers in this vicinity and to have wide-spread gangland connections” The report went on to say:

That is certainly some “speculating and conjecturing”. I could be wrong in suggesting it was more a case of the FBI being told, or at the least overhearing what took place?

Galante, who had just under $2,000 in cash, was arraigned, pled not guilty and released on $600 bail ($200 for each charge) to return to court at 7.00 pm on October 25th. On November 9th 1956 with former Mayor of Binghamton Donald W. Kramer representing Galante he received 30 days in Broome County Jail for unlicensed driving, $100 fine for speeding and a $50 fine for using an unauthorised driving license.

Chairman of the New Jersey Law Enforcement Council William F. Horan ordered an investigation “into the political pressures sought on behalf of Galante”. On January 11th 1958 the New York World Telegram and Sun reported that Assembly majority leader and New York legislator Joseph Carlino approached two of his colleagues, Assemblymen Daniel S. Dickinson, Jr. and William F. Passannante to intercede in “Mafia thug and reputed murderer” Galante’s case. Dickinson, after checking Galante’s criminal record had turned it down, Passannante, had spoken to Dickinson after he (Dickinson) had turned the case down and warned his colleague (Passannante) about Galante’s record. Passannante declared to reporters in an exclusive interview with the New York American Journal that he received a phone call from a lawyer whose name he couldn’t recall asking him to represent Galante who had been “arrested by State Police at Binghamton on traffic charges”. Passannante then called Dickinson telling reporters “Mr Dickinson told me he knew about the situation and the man involved and didn’t want the case”. When pressed on what else he did with the case Passannante replied, “after I got into the case, I became aware of his record and advised him to plead guilty”.

The inquiry also heard testimony from the owner of the car Galante was driving on the 18th October, Anthony Calendrillo who told the committee that he knew Galante but only by his first name, he then told them the first names of others that hung about the Abco Vending Machine Company, which was part-owned by Galante, Charlie, Doc, Joe, Johnny and Mike.

I mentioned before that the buck didn’t stop with Gleitsman and Policastro. It was discovered that Abco had a direct line into the West New York Police Headquarters. West New York Police and Fire commissioner Ernest J. Modarelli appeared before the inquiry on October 21st, 1957 and denied at the time, under oath, that he had anything to do with Galante’s case or sending Gleitsman to Binghamton.

Over the weekend of 11th /12th, January 1958 the New Jersey Law Enforcement Council released their report on the bribery attempt to the press. The January 13th, 1958 edition of the New York World Telegram and Sun reported: “In the report released to the press over the weekend, the LEC said the safety of the people of West New York is in the hands of officials ‘unfit’ to hold high office.”

“The report adds that the conduct of West New York Police Commissioner Ernest J. Modarelli and Detective Captain Chris Gleitsman ‘strongly suggests’ that their relationship with the criminal element may go much deeper than intercession and attempted bribery on behalf of an ex-convict.”

The report concluded that Sgt. Peter J. Policastro did not participate in the attempted bribery and had merely driven Gleitsman to Binghamton.

All of this took place over what was ostensibly three traffic offences. Whatever the original reasons to keep Galante out of jail the plan certainly backfired. It would also appear that the media were only informed of the attempted bribery after the committee had been wrapped up. Was there a media blackout for some reason? Police Commissioner Modarelli appeared before the committee on October 21st, 1957. Yet, the meeting at Apalachin on November 14th, 1957 still went ahead and where the non-arrest of one particular person along with future events and behaviour in my mind creates a suspicion difficult to shake off. But that’s another story.

“MY THING” – Tales Of A Reformed Gangster, hosted by Gunner A. Lindbloom

A Canadian Affair: How The Rizzuto Crime Family was Born: Part One