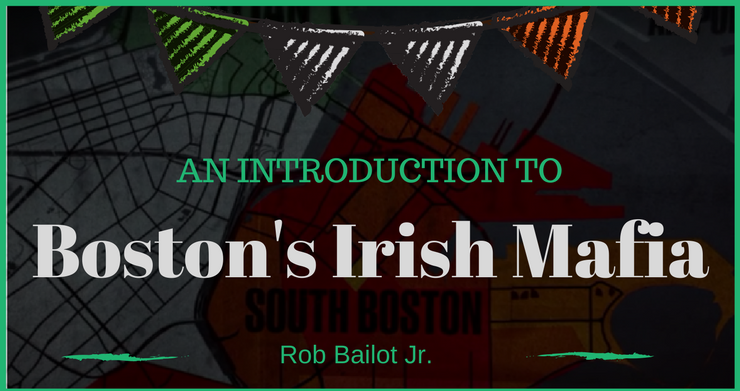 The Irish Mafia is said to be the oldest organized crime group in the United States, dating back to the early 19th century. Boston, New York, Philadelphia, and Chicago were some of the major cities they operated in.

In the mid-to-late 1900’s the Irish Mob had a strong presence in Boston. The Italian Mafia controlled Boston’s North End, while the Irish operated in surrounding cities such as South Boston, Charlestown, Dorchester, Roxbury and Somerville. Irish-American gangster Frank Wallace ran the Gustin Gang in Boston during Prohibition. After the Gustin Gang hijacked alcohol shipments belonging to the Italians, they agreed to a sit down with Italian mobsters Joseph Lombardi, and Phillip Bruccola. Frank Wallace and one of his top guys, Bernard “Dodo” Walsh, were ambushed and killed as they entered the meeting at the C.K. Importing Company on December 22, 1931. After the murder of Frank Wallace, the Gustin Gang retained it’s power within the city under Frank’s brother Stephen Wallace, but the Italian Mafia established themselves as the dominant criminal organization until Irish gangster James “Buddy” McLean, and the other Irish gang leaders took over the rackets in the 1950’s. Known as The Winter Hill Gang, they were the top gang in the area for over the next 30 years.

Joseph “Joe Mac” McDonald was a Scottish Irish Mobster, and founding member of the Winter Hill Gang along with James “Buddy” McLean. He was a close friend and mentor to McLean and Howie Winter. McDonald was a highly skilled contract killer. He was indicted on charges of fixing horse races in 1979 but fled to Florida as a wanted Fugitive. While on the run, McDonald and associate, Johnny Martorano, murdered businessman Roger Wheeler in Tulsa, Oklahoma under orders from James “Whitey” Bulger. Joe had one brother, Leo McDonald, who was also a criminal affiliated with the Winter Hill Gang. McDonald died of a stroke in 1997.
James “Buddy” McLean was orphan and adopted by a family in Somerville, Massachusetts. When Buddy was a teenager he worked as a longshoreman on the docks of Boston. McLean used his street smarts to build a criminal organization and eventually dominated the local underworld running numbers, loansharking and truck hijackings. During the 1961 Irish mob war, McLean killed Bernie McLaughlin as he walked out of a Charlestown Bar in broad daylight, and in front of dozens of witnesses.

McLean was arrested with Alex Petricone, but the witness who picked them out recanted so they were released. Alex Petricone was sent to California by McLean to keep him away from the war. Petricone started acting and changed his name to Alex Rocco. One of his first roles was playing Moe Greene in The Godfather movie. McLean was acquitted of the murder but went to prison for two years for possession of a firearm. He lead the Winter Hill Gang against their rivals for over two years until he was shot and killed October 31, 1965 by Stevie Hughes as he left the 318 Club on Winter Hill. He was succeeded by Howie Winter then, later, by James “Whitey” Bulger. In the late 1960’s and early 1970’s, two South Boston Irish gangs were at war. The Killeen Gang and the Mullen Gang. After one Killeen brother was killed in 1972, Howie Winter stepped in to put a stop to the war and took over all the Irish territory and the remaining members of both organizations were absorbed into the Winter Hill Gang. In 1973, Killeen enforcer James “Whitey” Bulger was appointed by Winter to operate the South Boston rackets.

Throughout the 1970s, Bulger used his influence to have rival mobsters murdered. Among his victims were Spike O’Toole, Paul McGonagle, Eddie Connors and Tommy King. In 1979 Howie Winter and members of the Winter Hill Gang were arrested and indicted on federal charges. When Winter went to jail, James “Whitey” Bulger became the new boss of the Winter Hill Gang along with his right-hand man Stephen “The Rifleman” Flemmi. Howie Winter was released from prison in 1987. In 1993, he was caught dealing cocaine and was facing 10 years, when the FBI revealed to him that Bulger was an informant. They offered Winter a deal to inform on Bulger, Winter refused telling them he was no “rat”, so Winter went back to jail and was released in July 2002.
With Howie Winter in jail, James “Whitey” Bulger became the new Boss of the Winter Hill Gang. In the 1980s Bulger, Flemmi and Kevin Weeks criminal activities included extortion, loansharking, bookmaking, truck hijackings, gun trafficking and drug trafficking, with protection from FBI agent John Connolly. In December, 1994, Bulger was informed by Connolly that he would be indicted so Bulger fled Boston, December 23, 1994, accompanied by his girlfriend Theresa Stanley. After months on the run Stanley decided that she wanted to return to her children in Boston. They traveled to Florida, where Bulger retrieved his “Tom Baxter” identification from a safe-deposit box. He then drove to Boston and dropped off Theresa in a parking lot. He met at Malibu Beach in Dorchester with Kevin Weeks, who had brought Bulger’s girlfriend, Catherine Greig. Bulger and Greig then went on the run together.

After 16 years on the run, and 12 years on the FBI Ten Most Wanted Fugitives list, Bulger was arrested in Santa Monica, California, on June 22, 2011. He was 81 years old at the time of the arrest. Bulger was arraigned in federal court on July 6, 2011. He pleaded not guilty to 48 charges, including 19 counts of murder, extortion, money laundering, obstruction of justice, perjury, narcotics distribution and weapons violations.

On November 14, 2013, Bulger was sentenced to two life terms plus five years. He was also ordered to forfeit $25.2 million and pay $19.5 million in restitution. In September 2014, Bulger was sent to Coleman II United States Penitentiary in Sumterville, Florida.

After Bulger, the Winter Hill Gang became a shadow of their former selves and never really recovered.

The Worst Mob Bosses of all Time – By Public Vote

Dial M For Mob: Part 4 – The Shooting of Frank Costello