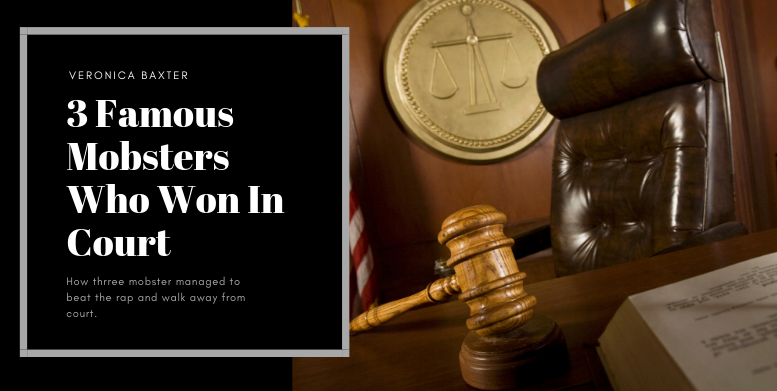 Schultz was born as Arthur Flegenheimer to a German immigrant family in the Bronx. He dropped out of middle school to support his mother and younger sister; when factory work didn’t cover the bills, he turned to petty crime. Flegenheimer was sentenced to prison for a burglary attempt in 1918 and released in 1920. Not long after his release, the Volstead act banned the production, importation, and sale of alcohol in the United States.

For the criminal underworld, prohibition proved to be his best employer. Working for Schultz Trucking Company, he soon began smuggling beer and whiskey from Canada to meet demand in New York City. It was here that he met Italian mafia enforcers and earned the nickname “Dutch” (a bastardized form of Deutsch, meaning German) Schultz. He soon left for better-paying jobs with Italian bootleggers, but the nickname “Dutch” Schultz stuck until his death.

Schultz teamed with local gangsters and Jersey City bootleggers, making a fortune during prohibition. He worked his way from driver and brutal enforcer to the leader of a massive distribution operation in the Bronx. He brutally and efficiently dismantled rival organizations and disloyalty in his own ring of criminals. Anyone who crossed him ended up crippled or dead.

With the end of Prohibition in 1933, Schultz turned to other schemes. Using his underworld connections, Schultz became a major player in the New York City numbers racket. He even tried to further his connections with the Italian mafia. Unfortunately for Schultz, their collaboration in the days of prohibition was an alliance of convenience. Many of the Sicilian families despised the hot-tempered German entering their world, though he was reliable enough to be kept around. He even had the ear of the Mafia Commission–but he would always remain an outsider, albeit a trusted one.

Charged with tax evasion by crime-busting U.S. District Attorney Thomas Dewey, on personal orders from N.Y.C. Mayor Fiorello la Guardia, Schultz was initially railroaded to a conviction in federal court. Citing his scandalous coverage in the New York Times, Schultz’s lawyer appealed the sentence trying to force a retrial and a change of venue, holding that no N.Y.C. jury could hear the case fairly.

The strategy was a success; the federal retrial was granted. It was to be held in Malone, New York: a sleepy upstate farming town. In the months before the trial began, Schultz played at being a philanthropist on a country holiday. He paid for children’s operations, gave out presents, funded charities–anything to endear himself to the people of Malone. The strategy worked; despite a brilliant prosecution by Thomas Dewey, the jury moved to acquit their benefactor of all charges.

Unfortunately for Schultz, the mafia was not as charitable. He tried to have the federal prosecutor assassinated, but his request was denied by the Mafia Commission as insane. Bribery was one thing, but the Mafia was not about to go to war with the United States over a tax evasion trial. Schultz began to plan the hit himself, calling on old prohibition contacts. When the Commission learned of this, they ordered a hit on Schultz himself. He was gunned down over dinner on the night of 23 October 1935.

Santo Trafficante, Jr was the son and heir to the Don of the Tampa crime family. Born and raised in the mob, his father sent him to Cuba in the 1940s, where he created an empire of gambling, girls, guns and more centered in Havana. By the mid-1950s, it was said that Trafficante held even more power than Cuba’s military dictator, Fulgencio Batista. Fidel Castro seized Trafficante’s assets in Cuba in 1959.

Amid the chaos of the Cuban Revolution, Trafficante returned to the United States and prepared to succeed his ailing father as Don of Tampa. The same business smarts and wise leadership that made him the King of Cuba were used to consolidate power while building the Florida mob into a billion-dollar enterprise. Despite close calls and multiple arrests, Trafficante, Jr. always slipped away. He would go on to lead the outfit until his death from natural causes in 1986, always one step ahead of the Feds and rival families.

Every part of his story is remarkable, but one incredible episode often gets lost amid his exploits in Havana and Tampa: his one and only conviction was overturned on appeal by the Florida Supreme Court.

In 1954, a police informant snitched on Santo and his younger brother, implicating them in a bribery scheme. On the informant’s testimony, a Grand Jury indicted the brothers. The case hinged on an alleged conversation where the informant overheard the brothers plotting their bribes in the back seat of a Cadillac.

If this had been in New York or Chicago circa 1954, somebody would have put a hit on the star witness. But Florida had just come through years of bloody warfare between rival families, and the brothers were confident they could win their case in court without risking family resources.

The witness’s story appeared to change under cross-examination, and the Trafficantes believed his Grand Jury testimony would show enough difference to prove he was either lying or confused, but totally unreliable.

The state refused to release the testimony; worse still, the prosecutor told the jury that since the brothers wouldn’t take to the witness stand and refute their conversation, they were guilty. He had been planning to launch a procedural appeal since the court denied his request for grand jury testimony. Trafficante’s lawyer seized on this as a violation of the brothers’ 5th Amendment rights.

The prosecutor’s slip-of-the-tongue gave him grounds to launch an appeal on constitutional grounds. He fought through a state appeals court, which maintained the state was right to withhold testimony and the closing argument was a harmless error and pressed for another review. In 1957, the State Supreme Court finally heard the case and agreed with their arguments. The court vacated Santo and Henry’s convictions. In his decades of leading the mob in Cuba and Florida, it was the closest Trafficante ever came to prison.

Trafficante was the last of the old guard, men who came of age in the ‘20s and ‘30s as Lucky Luciano was reinventing the Cosa Nostra into the modern mafia. To men like Trafficante, a Mafia don was supposed to keep a low profile. Standing out could get you whacked or arrested; neither one was good for business.

John Gotti represented a new breed. The old Mafia had become antiheroes in the 1980s, thanks in no small part to the influence of Hollywood. A new generation hoped to profit from the drug trade, led by men like Gotti. In 1985 he planned the public assassination of Paul Castellano and took control of the Gambino crime family. He flaunted his wealth and power with designer suits, fast cars, and extravagant meals. His flashy fashion and public persona earned him the nickname “Dapper Don” in the newspapers.

Early Scuffle With the Law

Before coming to power as the Gambino don, Gotti had been charged with assault, burglary, and racketeering. These charges would finally come to trial after his ascension, in April 1986.

While still just a Gambino captain, Gotti had an argument with a refrigerator mechanic over protection money. Gotti beat the man and took “his” payment.

When he originally reported the assault and robbery, the victim outed Gotti. After the victim (and lone witness) realized his attacker was now the most powerful mobster in New York City, he suddenly “forgot” the identity of his attacker. Several friendly visits from Serbian expat-turned-hitman Bosko “The Yugo” Radonijic likely helped his amnesia. With no witness and no case, New York prosecutors dropped all charges.

Gotti was next slated to go to trial alongside a bevy of co-defendants on racketeering charges. The trial was delayed due to a car bombing that killed a senior Gambino Capo. Later, Gotti’s bail was revoked when police discovered evidence of witness intimidation during his previous trial.

Still leading the Gambinos from prison, Gotti organized several murders and found an opportunity to sabotage the trial. A trick of fate left Gotti with an inside man on the jury. One of the jurors was a good friend of Bosko Radonijic. A $60,000 bribe secured his cooperation. Gotti was hoping for a hung jury; George Pape was able to convince his fellow jurors to do even better and handed Gotti and his co-defendants an acquittal. While Pape was eventually caught and charged with obstruction of justice, Gotti could never be definitively linked to the bribe, and Radonijic wasn’t available for the question, on account of his return to Serbia.

These back-to-back acquittals earned Gotti the nickname “Teflon Don” because it seemed as if any charges the State could make just wouldn’t stick. That he kept a spare designer suit at the courthouse so he could change after lunch–a “plumbing supply salesman” can’t be in front of the camera with a dirty suit, after all–only added to the public fascination with the most powerful, ostentatious wise guy in New York. He claimed he’d learned his tactics from Machiavelli and his style from the charismatic gangsters of prohibition.

The Teflon Don’s luck ran out in 1992. His underboss Salvatore “Sammy the Bull” Gravano was turned by the FBI and began acting as an informant to avoid capital murder charges. Sammy Gravano had been a Gotti loyalist for years, sitting at Gotti’s side the night Paul Castellano was whacked and enforcing his will for years after. The ostentatiousness which made Gotti a public celebrity eventually led to his downfall. He insisted on meeting his lieutenants face-to-face, often in public venues. With the temper of a tyrant and a vindictive personality, Gotti also alienated many older Gambino loyalists. Between testimony from defectors and wiretaps of his weekly meetings, the “Teflon Don” was no more; as the head of the FBI’s New York field office quipped, “The Don is covered with velcro; all the charges stuck.” Gotti was imprisoned on 13 counts of murder, extortion, obstruction of justice, and other crimes. He died in prison.