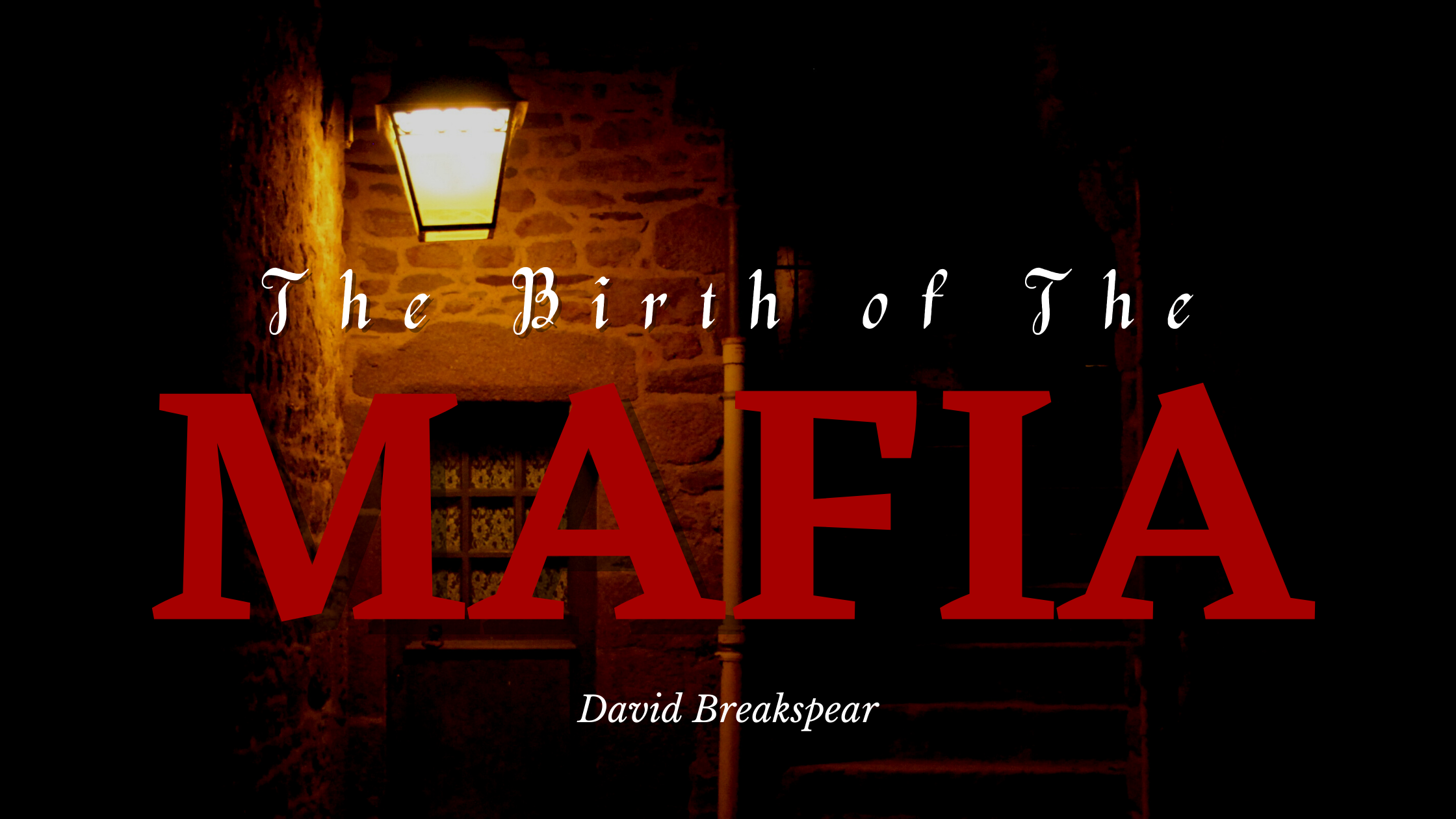 The word ‘Mafia’ was first mentioned in literature way back in 1668. It followed the name of a witch, and meant boldness, ambition, and arrogance.

None of those qualities were considered proper for a woman, and so, the word Mafia took on its first negative connotation.

There are several versions as to how the actual! Mafia in Italy came to be.

The Legend of The Three Brothers

My personal favourite is the legend of the three brothers. The three whose names were Osso, Mastrosso and Carcagnosso were also Spanish knights from the 15th century.

Toledo, in central Spain, was home to an organisation which was founded around 1412, La Garduña. The members of this society followed a certain strict code of ethics along with a tradition of ceremony and religion.

The three brothers, in an act of revenge, killed a man who was said to have raped their sister. They were found guilty of his murder and sent to one of the Sicilian Islands, Favignana, which at the time belonged to the kingdom of Aragon in the north-east of Spain.

In prison, the brothers established rules for a new secret society. Together they wrote secret codes; affiliation and initiation rites. They also wrote entire manuals of the rules and disciplines.

In religion, the three brothers devoted themselves to Jesus Christ, St. Michael the Archangel and Saint Peter, who it is said holds the keys to open all the doors.

They remained imprisoned until the break of dawn on their 30th year. After spending 29 years, 11 months and 29 days at Favignana they were free.

Released from prison the three brothers together swore an oath and went their separate ways.

It is written that Osso stayed in Sicily and created ‘The Honoured Men of Sicily’ (Cosa Nostra).

Mastrosso and Carcagnosso both crossed the Messina Strait to the mainland.

The story of the three brothers is also a legend told to the children growing up within ‘Ndrangheta families. The Calabrian folk song Ndrangheta camurra e mafia-trascuranza is played at large gatherings of ‘Ndrangheta.

A variety of stories are also in existence as to where the term Mafia itself originates.

In his book Man of Honor, Joe Bonanno, details one such story that dates to the 13th century.

As a child Giuseppe ‘Joseph’ Bonanno grew up in Castellammarre del Golfo, which translates to “Sea Fortress on the Gulf”, a town in the Trapani Province of Sicily. It was here that Joe fell in love with the history of the Sicilian Vespers.

The Sicilian Vespers was the name of the island’s rebellion against the French born king, Charles I, who had been ruler of Sicily since 1266.

During Easter of 1282, as people of Palermo were making their way to ‘Vespers’ (evening prayer), tax collectors would be waiting outside the churches to arrest debtors who would then be carted off to prison. A French soldier by the name of Droetto, under the pretence of working for the tax collectors, grabbed a pretty girl who had been walking with her mother and raped the young woman. An event that is said to be at the centre of the Sicilian Vespers. The mother, terrified, ran in the streets, shouting “Ma fia, Ma fia!” which in the local dialect means my daughter, my daughter. The young woman’s fiancé found Droetto and stabbed him. But the shouts of the mother, repeated by others, rang out in the streets, went around Palermo and all of Sicily. Ma fia soon became the motto of the resistance movement, which adopted it as an abbreviation for Morte Alla Francia Italia Anela (Death to the French is Italy’s Cry!).

I would suggest rather than be a true account, the fable was created to highlight the very heart of Sicilian values.

The origins of the Sicilian Mafia are hard to demonstrate because Mafiosi by their very nature are very secretive and do not keep historical records of their own. In fact, they have been known to spread deliberate lies about their past.

To understand the very essence of the Mafia one needs to go back to the first of the three Punic Wars between Rome and the Carthaginians which broke out on the island of Sicily in 264 BC.

The Carthaginians at this stage controlled most of the Western Mediterranean. The war lasted for 23 years. After a bloody war, which saw heavy losses on both sides, the Romans were eventually successful. The peace treaty that followed the war landed Carthage with substantial reparations. Sicily became a Roman province.

The Second Punic War which began in 218 BC witnessed the crossing of the Alps by Hannibal and the invasion of mainland Italy.

In 201 BC, the end of the second war, the Carthaginians were defeated once more and signed a peace treaty which saw them having to give up all their overseas territories to Rome and the Carthaginians ceased to be a military threat after having to severely restrict the size of its military. They also had to gain permission from Rome to wage war in the future.

The third Punic War began in 149 BC, and three years later in 146 BC the Romans destroyed the City of Carthage in Africa and slaughtered most of the population. The ruins of the city are to the east of modern Tunis on the North African coast. You can view a short video of the domain changes during the three Punic Wars (here).

Sicily was ruled over the preceding years by the Vandals, the Ostrogoths, the Byzantine Empire, and the Emirate of Sicily.

In 826 BC, a Byzantine commander in Sicily, Euphemius, rebelled against the imperial governor, and asked the Aghlabids to assist him, beginning the Muslim conquest of Sicily. The Aghlabids were an Arab line of rulers from the Najdi tribe who ruled Ifriqiya (Tunis and Tripoli) along with parts of southern Italy.

Arab control of Sicily brought with it many new aspects of life to the people. The Arabs were very considerate and allowed non-Muslims to practice their own religions, unlike the Romans. One important aspect of Arab life that was adopted by Sicilians, in addition to the spread of literature and the arts, was the subordination of women.

Another important aspect of Arab life adopted by the Sicilians was the idea of internal justice. Instead of having a system of authorities to deal with crime and misconduct, they used personal and internal justice to avenge crimes and set records straight.

Internal justice and the subordination of women became commonplace in Sicilian society and was later adopted by the Mafia who kept women out of the business.

Many believe the word Mafia is derived from the Sicilian Mafiusu, which has its roots in the Arabic word mahjas. Roughly translated, mahjas means swagger, but can also be translated as boldness, bravado and which is believed to be incorporated into the modern term Mafia, which implies the bold and aggressive nature of its elements.

According to scholar Diego Gambetta, in reference to a man, mahjas in nineteenth-century Sicily was ambiguous. It signified someone who was a bully and arrogant but also someone who was fearless, enterprising, and proud.

Characteristics of the Mafia were influenced by the many other groups who conquered Sicily, but the word Mafia remained more or less unaltered from the 1668 document, that is until 1861.

Following a revolt led by Giuseppe Garibaldi during the Italian unification, the House of Bourbon was unified with the Kingdom of Naples as the Kingdom of the Two Sicilies and once again Sicily became part of Italy.

Garibaldi had set off to Sicily to unify it with the mainland and it is said that when the Saracen Tribe of Palermo heard of the invasion, they ventured off to a set of caves in the Marsala region of Sicily. Prior to the 16th century, Saracen was commonly used to refer to Muslim Arabs. The caves were known as the mafie, and the Saracen used the caves to hide from Garibaldi and his troops. Garibaldi named the people hiding in the cave’s Mafiosi.

However, it is also said that, in Sicily, the term Mafioso had no criminal undertones and was initially used to refer to a person who was suspicious of central authority.

In 1863, a play co-written by actor Giuseppe Rizzotto and writer Gaetano Mosca called I mafiusi de la Vicaria, is said to be responsible for popularising terms such as mafia, umertà and pizzo in Italy. The play which was set in a Palermo prison around a main character, a man named Gioacchino Funciazza (Ugly face) portrayed as the ‘boss’ and from the very outset shows his power and imposes his own rules whilst getting paid ‘u pizzu (a tribute) from his fellow prisoners

Funciazza defends the oppressed and those who appeal for his protection; he has respect for the dead; ‘Baptizes’ the new members by accepting them as companions and subjects, initiating them to the rules of his association; and promotes those he deems the most cunning. He is entitled to the nickname ‘mafia’, a term that at that time had a positive connotation. Co-writer of the play, Mosca, is said to have based Funciazza on information provided by real-life Camorrista Gioacchino D’Angelo who had spent a few years in the Palermo prison.

The third act of the play had to be changed due to the play being accused of glorifying the Mafia. The renewed final part of the play shows Gioacchino Funciazza who, when released from jail, renounces his past as a Mafioso and invites his old associates to follow him in redemption.

In 1864 the leader of the Palermo National Guard, Nicolo Turrisi Colonna, wrote about a “sect of thieves” operating throughout Sicily. They had created special signals to recognise each other, they offered protection services and hated the law. They had a code of loyalty and refused to speak to those in authority. This was known as Umirtà (code of silence).

The first time the word Mafia officially appears, alongside the meaning still in use, is in a report written by the chief prosecutor of Palermo in 1865, Filippo Antonio Gualterio. There are some that say in searching for a description of the group he was writing about, Gualterio used the term Mafia due to the popularity of the play I mafiusi de la Vicaria.

One of the first accounts of an initiation ceremony into the Mafia was contained in an 1876 police report from an interview with Bernardino Verro. Verro had become a member of a Mafia group in Corleone, the Fratuzzi (Little Brothers). In a memoir written in the spring of 1893, Verro described the initiation ritual he underwent.

According to the man considered to be the most important researcher and scholar of Sicilian folk traditions, Giuseppe Pitre, the ancient term Mafia indicated beauty or physical prowess, which gave the mafia a positive connotation, the equivalent of a sort of Robin Hood, kind to the poor and terrible to the rich.

“The Mafia voice at the time was worth beauty, grandeur, security of mind and in excess of this, boldness, but never bravery in a bad sense, never arrogance, never hubris. The mafia man or mafioso, understood in this nineteenth-century sense, he should not frighten anyone because few are as creative and respectful as he is”

However the Mafia came to be or from where its name derives, one thing is definitely clear, over the centuries, Sicilians banded together in groups to protect themselves and carry out their own justice. By the 1800’s, and with changes to the land act, some of these groups emerged as private armies, or mafie, who extorted protection money, pizzo, for and from competing landowners, eventually becoming the organization known today as Cosa Nostra, the Sicilian Mafia.

Servadio, Gaia. Mafioso: A History of the Mafia from Its Origins to the Present Day. New York: Stein and Day Publishers, 1976.