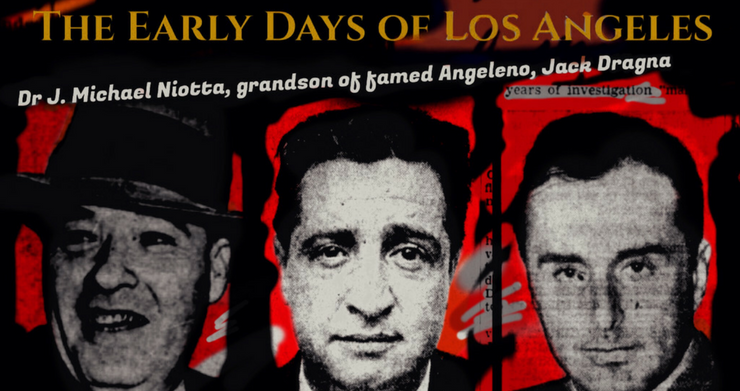 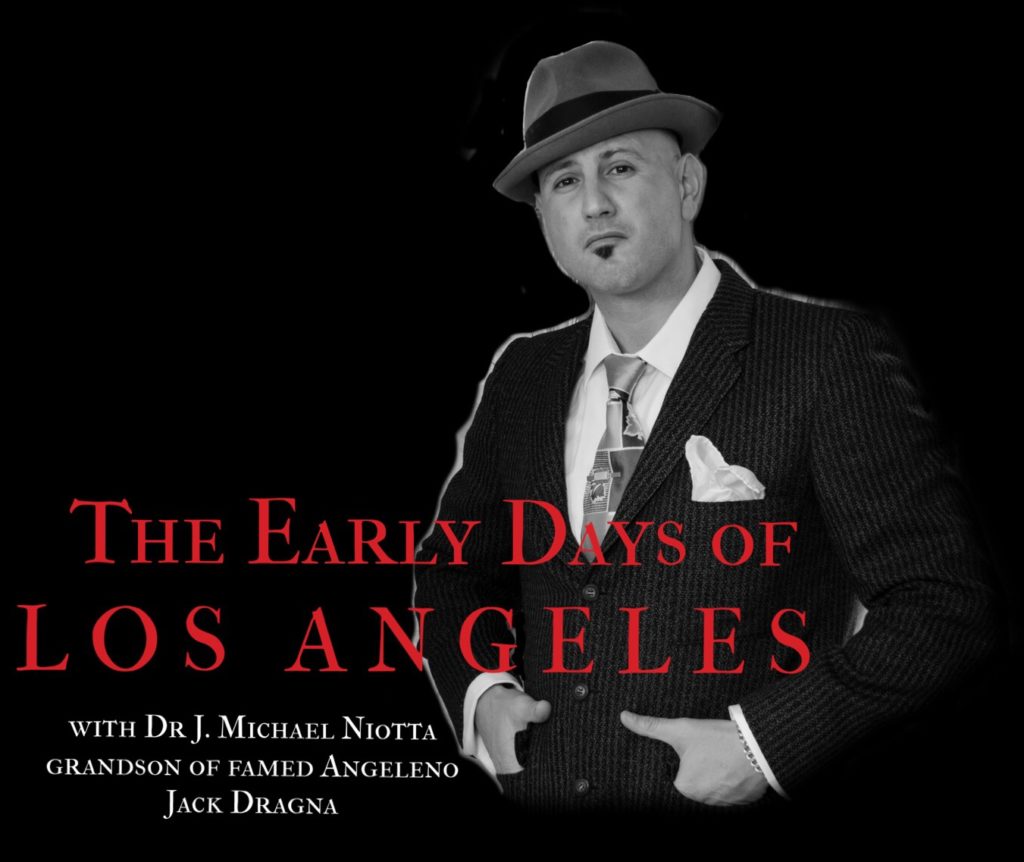 A lot of work has gone into shaping the Jack Dragna biography. The installment that follows consists of a few excerpts from a chapter on my great grandfather’s political and social club, the Italian Welfare League. Like Jack, the club is often misrepresented. Enjoy a little insight into the political plays LA’s Sicilians made during the middle and late twenties in order to combat their adversaries and to push back against the unconstitutional tactics targeting the city’s Italians.

“This was strictly a muscle outfit, preying on various business activities, such as produce, cleaning establishments, barbershops, etc., and had its fingers in gambling, bootlegging, smuggling, and was suspected of many black-hand killings and some sudden disappearances of Italians, bootleggers, and others.”

Crime writers have referenced this assessment again and again in descriptions of the Los Angeles based, Italian Welfare League. The list includes Tere Tereba’s Mickey Cohen: The Life and Crimes of L.A.’s Notorious Mobster (2012), Robert G. Folsom’s The Money Trail: How Elmer Irey and His T-Men Brought Down America’s Criminal Elite (2010), Alton Pryor’s Outlaws and Gunslingers (2001), Ed Becker and Charles Rappleye’s All American Mafioso: The Johnny Rosselli Story (1991), and a myriad of other crime books going all the way back to the late 1960’s. Each source stipulates that the League formed as a front for bootlegging and extortion activities. The reasoning stems from mention of two of the group’s founders—Joseph Ardizzone and Jack Dragna. Despite Joe and Jack’s affiliation with the League, the often repeated summary about the ethnic club is less than accurate—the group actually did a lot of good for the city’s Italians.

In following the trail of references, the tracks nearly always make it back to the big seller, Ed Reid’s 1969 publication, The Grim Reapers.
Like other works authored by Reid, the content is now garnering a fair amount of speculation. But Reid’s book is not the primary source either. The claim appeared more than a decade and a half earlier, making it into the 1953 Final Report of the Special Crime Study Commission on Organized Crime in California. This section of the document, which focuses on early LA, can be construed as LAPD Chief William H. Parker’s contribution. Parker called for a meta-analysis of all the data pertinent to the first fifty years of crime activity in the City of Angels. Somewhere within a hodgepodge of “coroners’ reports, homicide reports, crime reports, missing person reports, and subsequent events,” lies this negative statement an officer made about the Italian Welfare League.

Among the vast number of files gathered, no additional specifics, facts, proof, confessions, or even one single specific example is offered that can substantiate the slanderous accusation made about the League. The only other note included in the report is a comment which states “all officers authorized to issue checks on above organization.” If additional checks received a green light then either the findings never made their way into a police paperwork or there wasn’t any criminal activity to report, which raises a pair of questions: was the statement one of hearsay, a hunch, or was the officer confusing two separate entities? The Italian Welfare League welcomed anyone of Italian heritage and had an exceedingly high number of members. In addition to their affiliation with the League, Joe and Jack also belonged to a much more exclusive Sicilian fraternity—one which the agent likely intended to reference.

The Italian Welfare League, which took root during the middle-twenties, was as much social as political. They held a lot of parties and charities in addition to influencing the vote and backing candidates. The club fell under what would commonly be called a “protective.” News coverage that made this connection has led to at least one journalistic error—crime authors stipulate the organization was named the Italian Protective League. It wasn’t. The concept of a protective was far from new. Members of a wide variety of industries, from poultrymen to vineyardists, united in order to ensure the rights and safety of workers. They forged industry standards, backed political candidates they believed would improve their conditions and standing, and ensured that the competition among vendors stayed fair rather than bloody. Collectives such as this began popping up all across the country long before Prohibition. In regards to America’s many Italian protectives, most major cities could boast independent and unaffiliated chapters, and naturally, the very same troubles that plagued unions infected protectives. Although nowhere near a Hoffa-Teamster level, the Italian Protective League out of Boston did suffer from a bad case of union dues fraud.

Prohibition spurred a lot of dissension throughout America, and especially among Californians. The impending drought threatened one of the state’s most promising industries; an industry comprised predominately of Italians. The group, known as the Italian “grape men,” produced well over eighty percent of the country’s wine grapes. Initially the amendment had the state’s farmers and viticulturists in fear and anger. Some of these men put their trust in Joe Ardizzone and Jack Dragna and ended up making a whole lot of money. Acting on behalf of the Southland’s ranchers, the pair boarded trains to barter deals back East, traveling cross country to speak with men like Johnny Torrio, Alphonse Capone, and Tommy Lucchese. As Kent Crowley of the Los Angeles Times expressed in 2013, they “ended up rescuing many small family vineyards, wineries and wine stores that populated Route 66 from San Bernardino to Los Angeles.”

Although Joe and Jack profited as a result of Prohibition—becoming wealthy as bootleggers, liquor sellers, and by brokering the sale of wine grapes—they actually formed the League in order to dispute dry laws. To clarify, the League wasn’t trying to put an end to the 18th Amendment. Instead, it hoped to stop the ill effects of California’s Wright Act.

What Paul Lieberman (Gangster Squad) chalks up to as “old-fashioned politics, playing to the ethnics” actually held a deeper agenda. Think of it as a well played countermove on the part of the Italians. The Volstead Act allowed each state to regulate Prohibition how they deemed fit. California’s tool for governing and enforcing became the Wright Act, which gave all the power in each county to the District Attorney. The “police and other peace officials” were now obligated to obey the whims of one man—the “administrator of the law.” The Deputy District Attorney of Los Angeles, Asa Keyes, took over the county in 1923. Like Mayor George Cryer, DA Asa Keyes belonged to the Combination. This group of political gangsters who ran the LA rackets were not partnered with the Sicilian clans. They battled in the streets over control of the bootlegging industry. Joe and Jack put together the Italian Welfare League in the middle of Keyes’ run and likely as a means to enter the political realm and better combat their adversaries.

Over the span of at least a six year run, the League had many individuals serving in leadership roles. It is very probably that the organization itself was on the level. The prestige and sway over the Italian colonies Joe and Jack gained as a result of their involvement with this group; however, afforded them the opportunity to make some very strategic moves. Though mutually beneficial, many of the arrangements that came together proved less than legal. As Warren R. Hull and Michael Druxman surmised in Family Secret,

“Jack Dragna got into the game when he became the head of an immigration rights organization.” It would serve as “an avenue by which Dragna laid the foundation for his criminal empire.”

Under the guidance of the new DA, Prohibition agents—“Prohis”—began cracking down on the home brewers of Los Angeles; mainly by invading Italian neighborhoods. The fact that SoCal legislators wanted the state to remain dry didn’t voice much objection from Joe and Jack—they were making plenty of money off legislative stupidity. The efforts of Asa Keyes and the Combination; however, could not be abided. Keyes’ dry squad specifically targeted Italian communities, resorted to excessive force, degradation, and unconstitutional tactics. This is when the League got started.

Charges that homes of Italian-Americans have been illegally entered, families insulted and humiliated by members of the Los Angeles county liquor squad, were made last night by Griffith Jones, attorney for the Italian-American Protective League, who addressed 300 members of that organization in a meeting conducted at Walker’s Auditorium, 730 South Grand Avenue.

Attorney Jones “asserted the organization he represents is not one to encourage violation of any law but rather to uphold it.” Pointing out the wrong-doings of those appointed to uphold the law and protect the people, he “declared that the county liquor squad habitually operates without legal authority and that it has frequently taken men into custody in one end of the county” and delivered them to another part of town, “where the judge would do its bidding.”

Fighting for the rights of their members and standing up for their ethnic values and way of life, the Italian Welfare League gained considerable trust from the city’s Italian enclaves. Via this sway over the workers of a variety of trades, they took control of labor and used it as a means for bargaining. During the second half of George Cryer’s term, they put this strength to use. “Many city contracts went to Italian Protective League sanctioned companies,” explained Hull and Druxman. And in thanks, these “contractors kicked back a percentage of the projects’ profits to Dragna, who in turn made donations back to the mayor’s office” by way of the League. With this quiet arrangement, “Dragna built a financial base that enabled him to grease the palms of city council members, assistant DA’s, and street cops.”

District Attorney Asa Keyes served until 1928. That’s the year they ousted and imprisoned him for accepting bribes. Corrupt Mayor George Cryer finished out his tenure late that year and chose not to run for another term. Down two very key players, the Combination suffered a monstrous hit. The Italians, on the other hand, moved up in power, position, and stature.

Joseph Ardizzone held ties to the Italian Welfare League all the way up till the time of his disappearance in late 1931. By then Jack Dragna and Thomas Vaccaro had already served a term as president and Tony Flocca was now in office. The League headquarters changed as well, relocating to 1784 North Main Street. What Ed Reid and those who’ve quoted him since have failed to highlight, are the League’s many efforts to better conditions for the Italian people. They pushed back on prohibition agents, provided legal representation, gave Italians a political voice, conducted “charity work in caring for the needy Italian families,” and even invested in “the educating of Italians to become good American citizens.” Assisting Italians in gaining U.S. citizenship, the League building on North Main held nightly classes which taught Italians about American laws and government.

Black Sox Scandal Trial: On This Day in 1921