The Cradle of Cosa Nostra 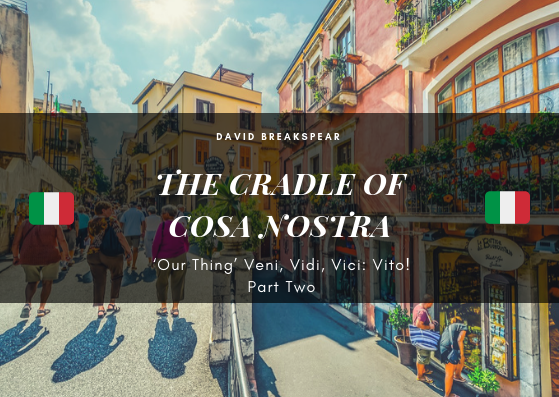 It cannot be argued Vito ‘Don Vito’ Genovese led a life full of twist and turns, similar to a game of Snakes & Ladders maybe? Yet how many of those slides down were actually of ‘Don Vito’s’ making? I personally believe the waters have been muddied somewhat in respect of ‘Don Vito’, in most, if not all of the problems he faced.

We last left Vito in 1947 as he was acquitted for the murder of Ferdinand Bosccia, which he only faced due to the resilience of one Orange C Dickey. He could not be swayed by his superiors to leave it, nor indeed bribes, then threats from Vito himself. I also gave a tantalising hint as to what was come. I would like to visit an area of Vito’s life that was to be very significant, which is the ‘Narcotics Trial’ during the winter of ’59.

This would be the last time that Vito would taste the air of freedom but was all as it seems? Join me, as we take a closer look at the trial of ’59.

It was widely accepted by those witnessing the trial that Vito Genovese was set-up and the main prosecution witness, Puerto Rican, Nelson Cantellops was lying, and the credibility of government witness Joseph Basile was also brought into question. Court reporters of the time themselves suggested that Cantellops was obviously telling a story, probably given to him by his government handlers, or whoever else wanted Vito out the way? 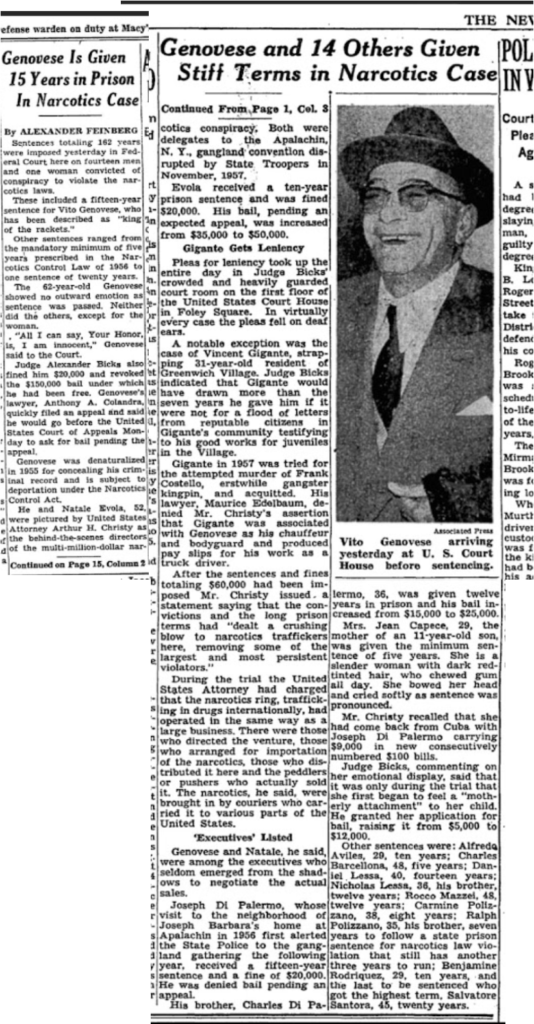 Following a trial of 14 weeks, it had started January 15 ’59, and 12 hours of deliberation, the jury of six men and six women returned at 10:05pm on Saturday April 3, 1959 to give their verdict to the federal court sitting in New York. The full list of indictments against them were:

1. Conspiracy to import and smuggle narcotics into the United States.
2. To receive, conceal, possess, buy and sell the drugs.
3. To dilute, mix and adulterate the drugs prior to distribution.
4. To distribute the drugs.

The only defendant to be acquitted was Louis Fiano, however, he was already serving 20 years on a different narcotics charge in California so, not exactly a celebratory moment!

It is a well-known fact for his alleged involvement Vito Genovese received 15 years imprisonment, lets take a closer look at the other defendants in the case and the respective punishment they received. 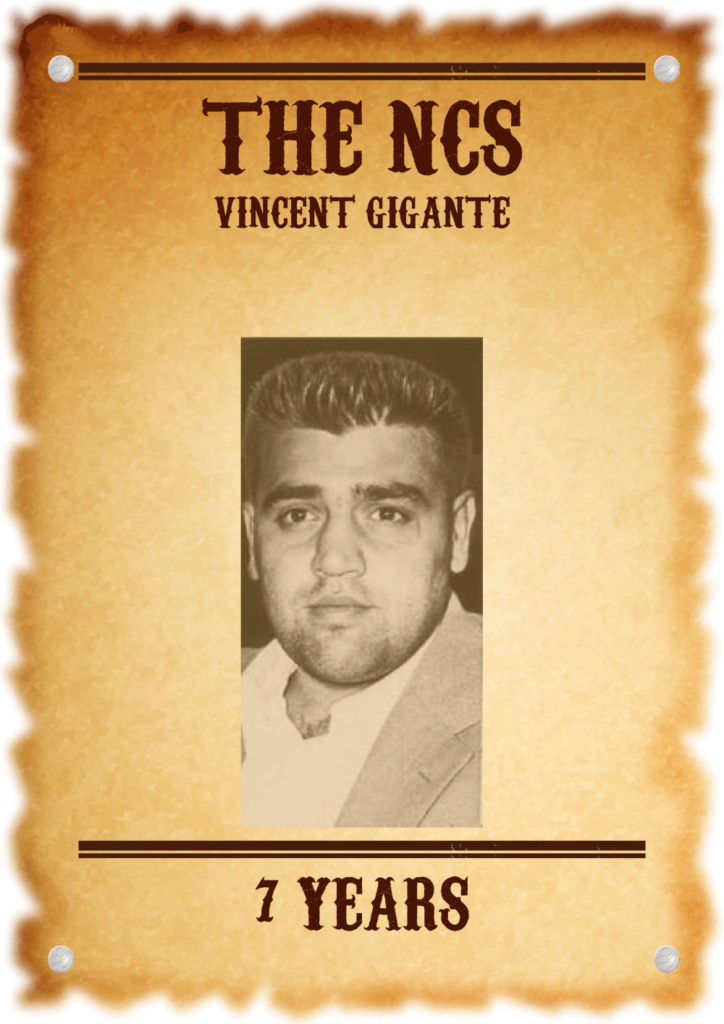 The chin, so called due to the village, in which he grew up, having too many Vincent’s. All the Vincent’s in the village had nicknames such as; Vinny blue eyes, Vinny tall, Vinny short and so on. The Chin’s mother used to call him Cincenzo (Chin-chenzo) so he became Vinny Chin. Gigante, at the time a Genovese soldier and Vito’s personal driver/bodyguard, was arrested a few weeks after being acquitted for the attempted murder of Frank Costello. He received 7 years imprisonment for his alleged role.

Evola was a close associate of Joe Bonanno and had served as an usher at Joe’s wedding in 1931. It was suggested that following Joe Bonanno’s retirement in ’68, Evola became boss of the Bonanno Crime Family. Evola also had close ties, in the garment district, with Vito Genovese and Carlo Gambino. He received a term of 10 years. 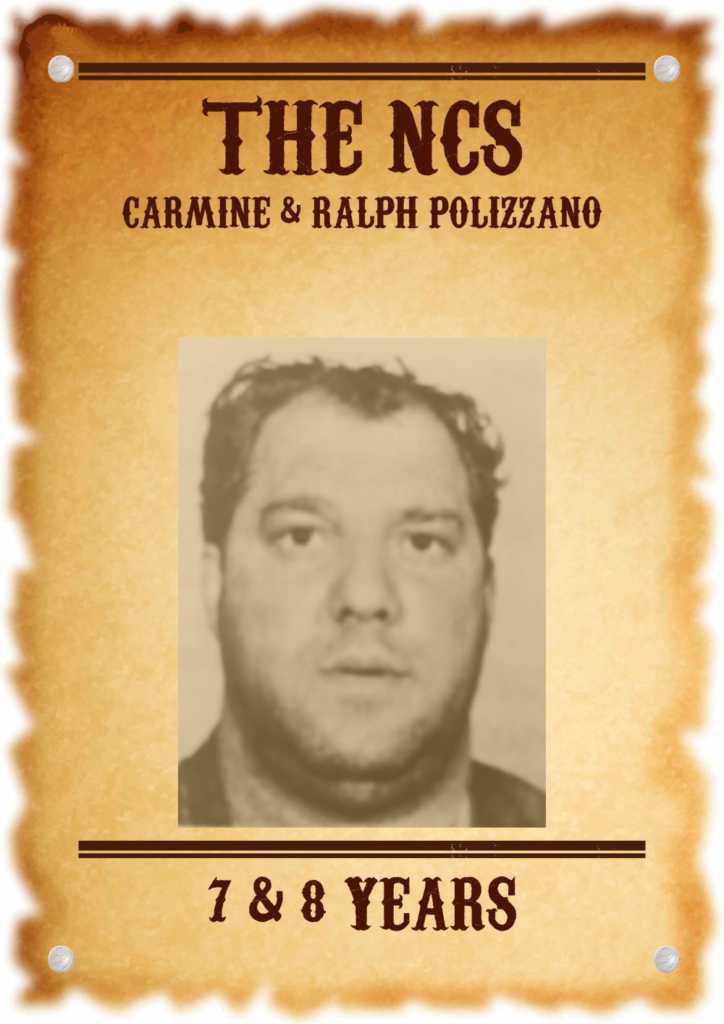 Although enlisting on separate occasions both Polizzano brothers served in the US Army until being discharged in 1945 after serving 3 and 4 years respectively. After giving himself up on a 1957 traffic violation, Carmine was arrested and arraigned on the narcotics charges, he was given bail set at $10,000. In answering a local reporters question Carmine said he was clean as he could be adding “May God strike me down if I’m not”. Carmines younger brother Ralph owned the ‘Squeeze Inn Bar’ on East 4th St. alleged to be the base for a large heroin distribution process. The associates of Vito Genovese received sentences of 8 and 7 years. 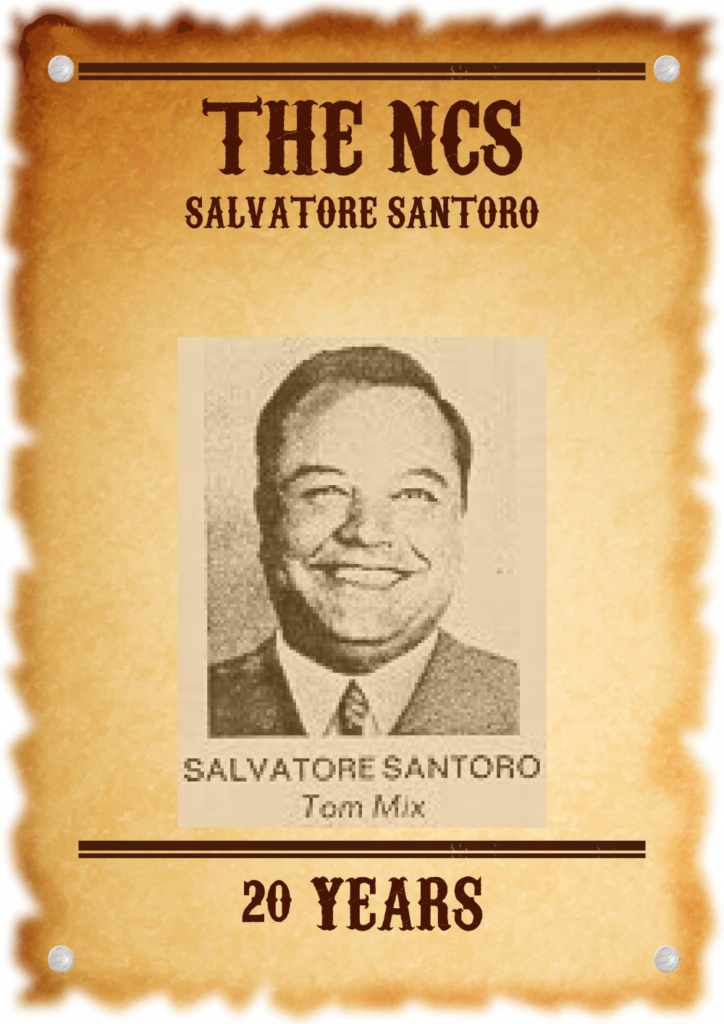 Santoro, a future underboss of the Lucchese crime family, controlled a huge heroin operation out of the Bronx and East Harlem. It was rumoured that Santora was an associate of ‘Bumpy’ Johnson, which was never confirmed. The 20 years Santora received would pale into insignificance to the 100-year term he would receive in the Mafia Commission Trial which began in September 1986. 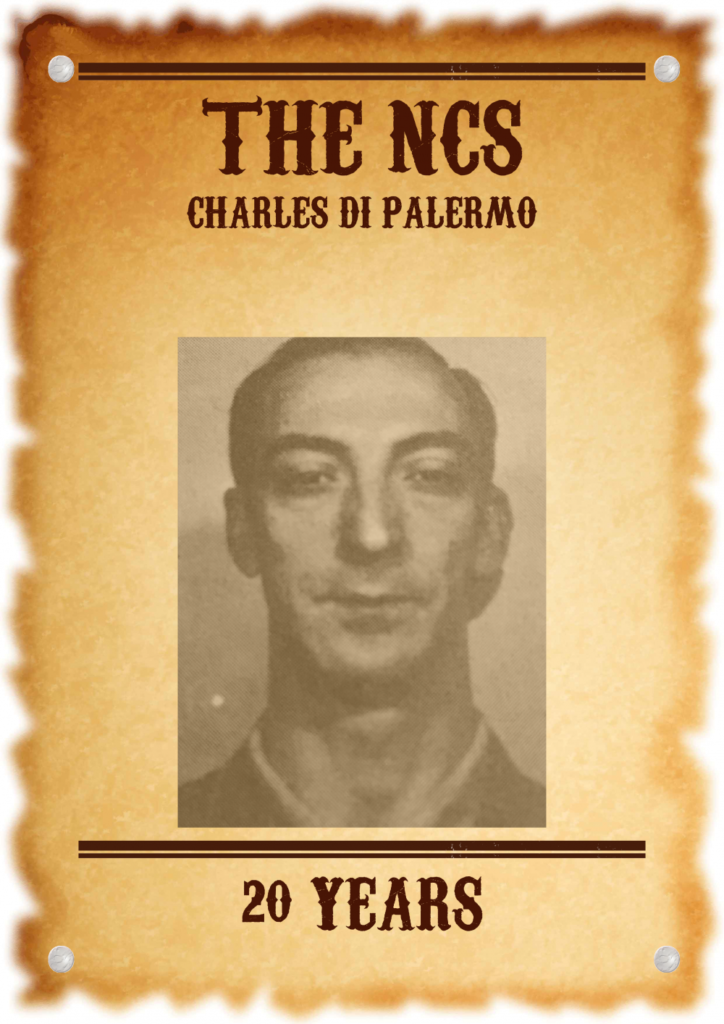 This would not be the first and definitely not the last time the Di Palermo brothers would face jail time for drug trafficking charges. Just like the Polizzano’s, the Di Palermo siblings also served in the US Army at the same time. Receiving 15 years, Joseph Di Palermo aka ‘Joe Beck’, was also the guy that Valachi thought was sent to kill him. Valachi, scared for his own life, decided to act first and sought out ‘Beck’ (Di Palermo) and murdered him. However, Valachi had killed someone that looked like ‘Beck’, starting a chain of events that would lead to the ‘Valachi Hearing’. Charles Di Palermo earned himself a 20-year stretch. 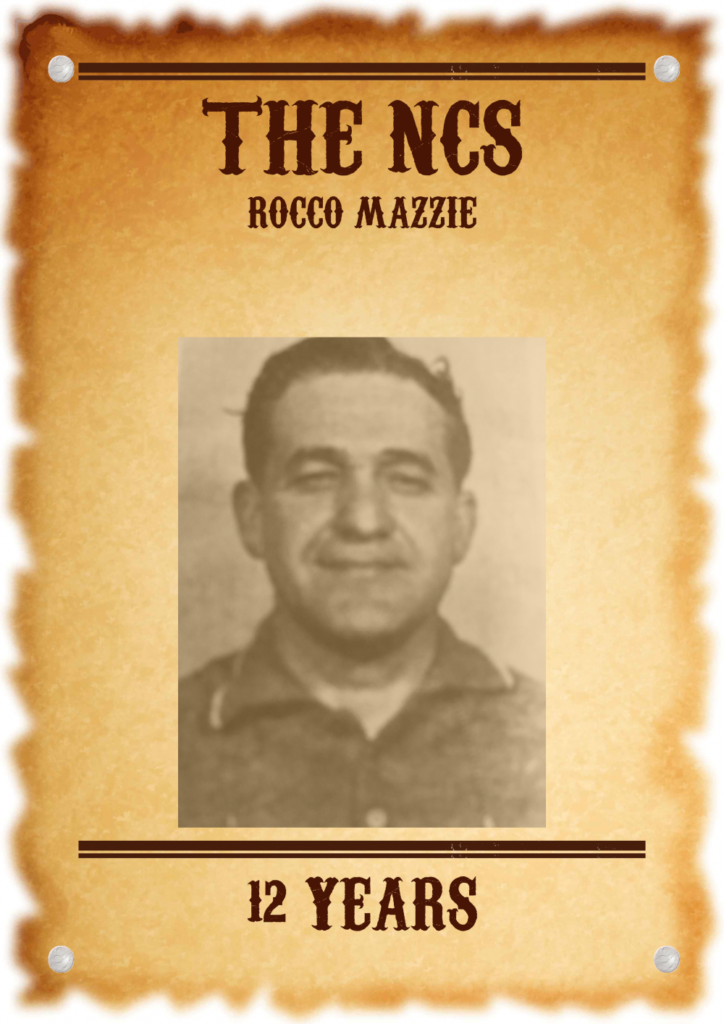 Mazzie began life in the Anastasia crime family under boss Albert Anastasia before becoming a Capo in the Gambino crime family after ‘Don Carlo’ was instilled as boss following the infamous murder of Anastasia whilst being given a shave. Mazzie played a major role in the conspiracy dealing directly with Cantellops. Mazzie was given a 12-year prison term. 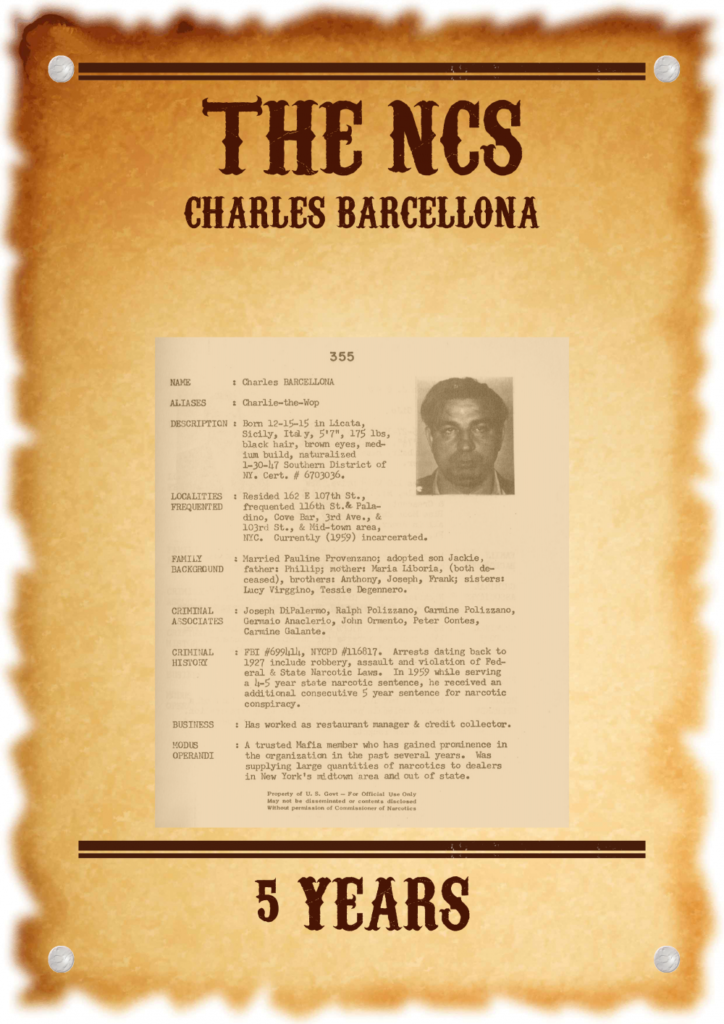 Barcellona, aka ‘Charles the wop’ and ‘Sleepy’ had applied for US naturalization in January 1947. Roy Reardon, Barcellona’s lawyer, described Cantellops, during cross examination, “as a man who cheats, sold counterfeit lottery tickets, phony dimes, lived in adultery and sold narcotics for his own personal gain”. Reardon was convinced Cantellops gave false testimony over the 19 days he was on the stand. For his part, Barcellona received 5 years. 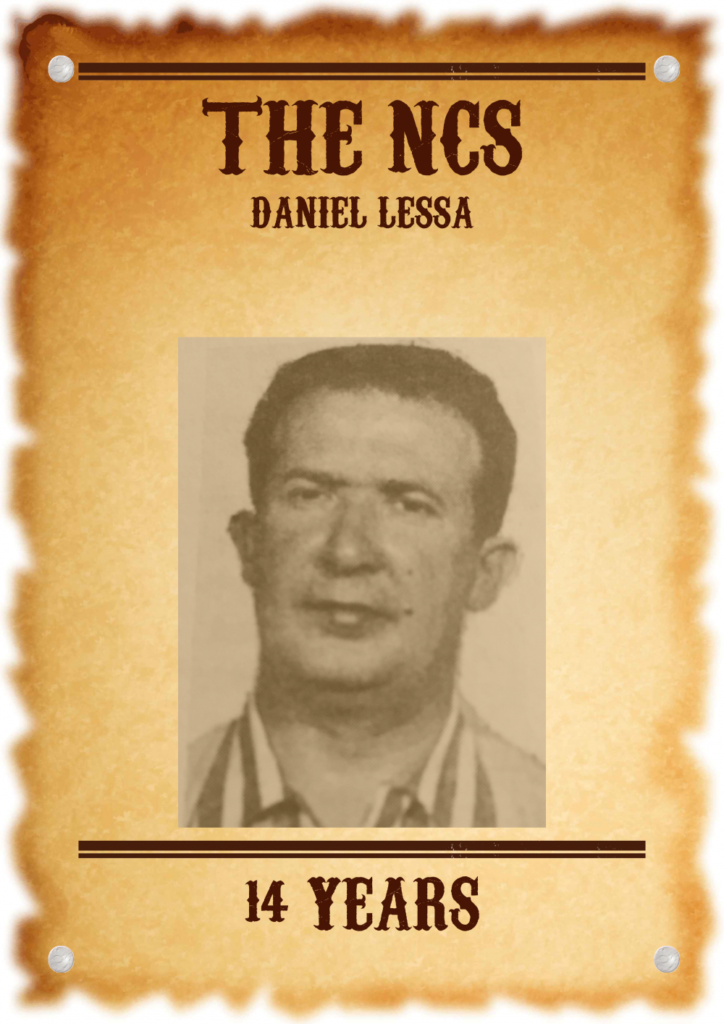 The two brothers, both soldiers in the Lucchese crime family received respective sentences of; Daniel, aka Mushky 14 with Nicky getting 12 years imprisonment. The brothers were regular customers of Rocco Mazzie and John Ormento. Ormento, along with Carmine Galante, was also indicted, he and Galante disappeared but were eventually picked up and were given lengthy prison terms. John Ormento died in 1974 in prison. Galante was released after serving a 12-year term.

Mark T. Smith, representing Aviles, also attacked the credibility of Cantellops during cross examination, as he did to other co-conspirator turned government informer, Joseph Basile. Aviles became a major customer of Cantellops in 1957 after Cantellops was released from prison in February of that year. The judge gave Aviles a 10-year term.

Rodriquez was the only one at the subsequent appeal who had his conviction overturned and the indictment dismissed in his favour. Rodriquez initially received a 10-year sentence at the original trial, however, his lawyers successfully argued that he was not a part of the conspiracy which the appeal court accepted. 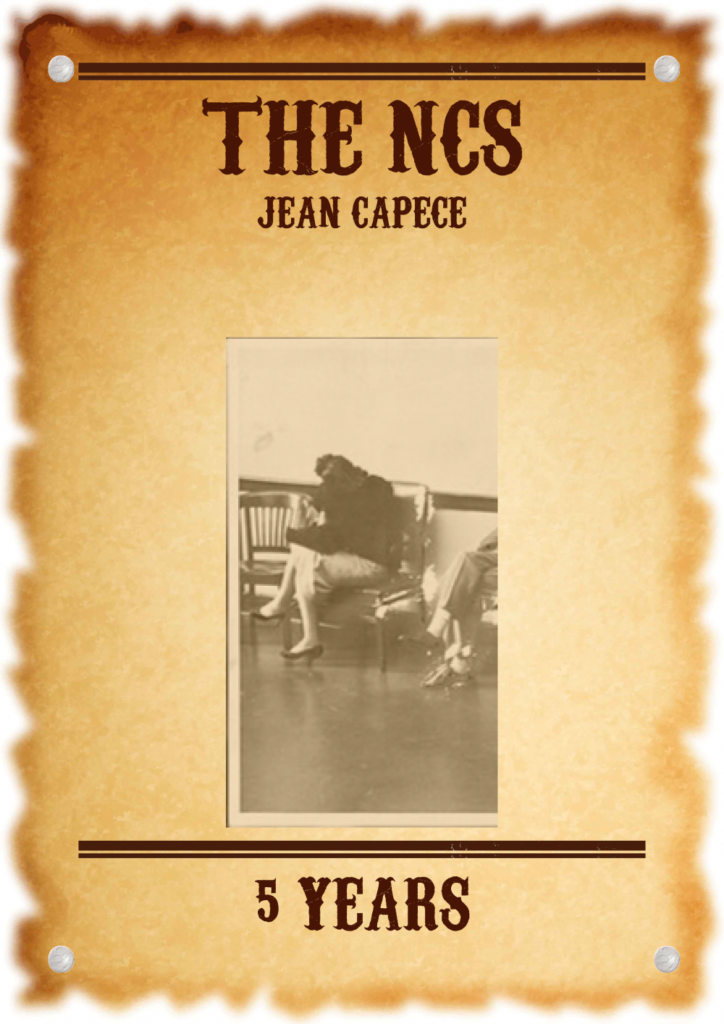 Not much is known about the young, only female in the group. She was known as a close associate of the Di Palermo brothers and with the travelling it was suggested she did, one could argue she was used as a courier bringing drugs back from Cuba and Mexico. Sentenced to 5 years and along with Vito Genovese and Vincent Galante was immediately remanded to custody following sentence. 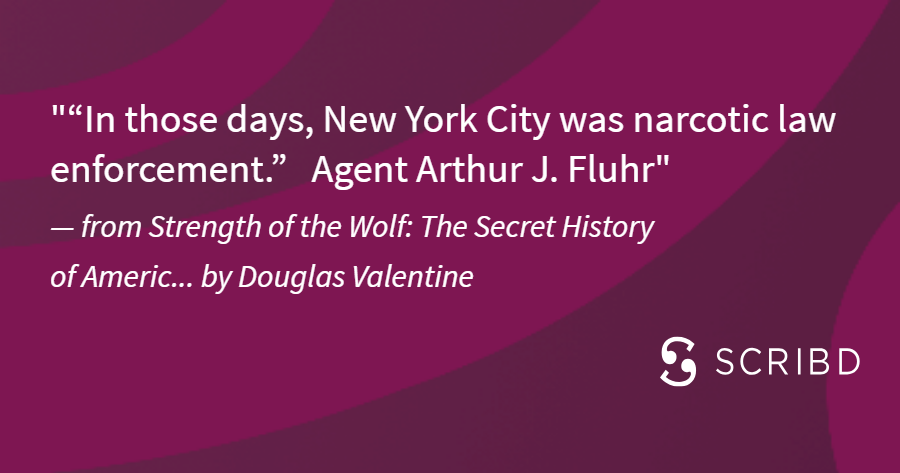 The FBN (Federal Bureau of Narcotics) managed to turn four of the defendants to give states evidence against their co-defendants. Short-term gain for, what must be, long-term pain? The ‘rats’ were, of course Cantellops, who we will look at last, along with; Peter Contes, Joseph Basile and Salvatore Marino.

Contes was arrested in April 1956, along with his cousin Charles Pappalardo, for whom he was supplying heroin to. Contes testified to drug deals with the Lessa brothers, Rocco Mazzie and John Ormento.

This was not Basile’s first case of 1959 in which he would appear for the prosecution. Earlier that year Basile was a government witness in another narcotics case. On this occasion it was against Harry Stromberg, also involved were Daniel & Nicky Lessa. Drug peddling Basile got arrested on November 10, 1956 and true to form, was soon providing the authorities with information once again for his own personal benefit.

Marino, who along with close associate of Ralph Polizzano, were arrested on July 6, 1957. Upon cross-examination whilst giving evidence Marino claimed hew was attacked at the police station by the arresting officer and two of his fellow officers. He also claimed that he witnessed Polizzano receiving the same treatment from his captors.

Co-conspirator who became the prosecutions main witness. The many times convicted drug trafficking felon from Puerto Rica spent a total of 19 days in the witness box. One of his many claims was that Vito Genovese personally cleared him to be an operator in the narcotics ring. Following his arrest on July 1, 1957, Cantellops soon starting to cooperate with the FBN. As was mentioned earlier in the article, Cantellops’ credibility was constantly under attack from defense lawyers. Court reporters of the day were publishing stories that Cantellops was definitely narrating a story. 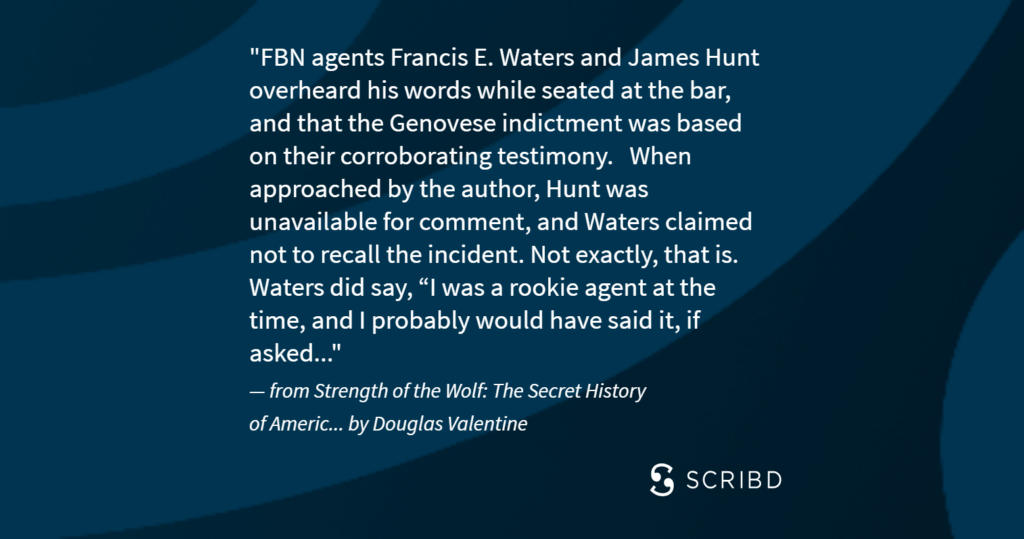 During his questioning after his arrest it is said that Cantellops was asked to describe things such as the weather and driving conditions on particular days, plus other unique data, in order for him to corroborate his story, which he got correct. William ‘Tendy’ Tendesky, the assistant US Attorney for the south district of New York, wanted more proof. Cantellops agreed to meet, under surveillance from the FBN, with Genovese. It was alleged at this meeting, when the Puerta Rican was presented to ‘Don Vito’, Genovese said “He’s alright”.

There has been a lot of conjecture over the years in relation to the credibility of this case. It is a well-known fact Genovese hated working with non-Italians, would he have really entertained Cantellops? Genovese kept a tight personal ship and the thought of him wanting to meet low-level Cantellops does not ring true with me. Rumours abound that a consortium including; Lansky, Costello, Gambino and Luciano, not only paid Cantellops $100,000 to give evidence but also helped him and the interested agencies set Genovese up. 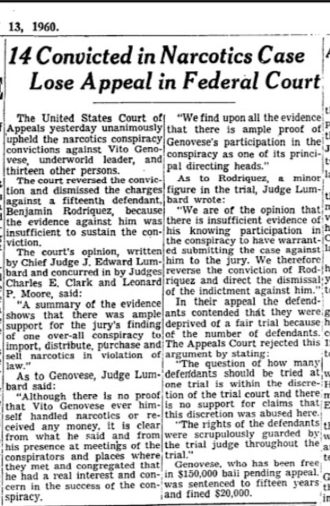 It would appear that the late 50’s became a constant battlefield for Vito Genovese with certain people wanting him out the way without creating a war, and for their own personal gain. I believe taking a closer look, which we will do next time, at the events surrounding Apalachin, which the CIA had prior knowledge of, will also highlight my suggestion Vito was as not to blame for certain issues as some may think.

Although 1959 was nearly 60 years ago, many commentators, me included, still question the validity of the ‘Narcotics Trial”. I will leave the last words to Frank Selvaggi, a senior agent in the Federal Bureau of Narcotics, who called the trial:

Add Your Own Mob Facts

Can You Guess Which Mobster Died First? 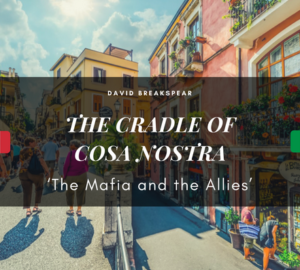