On this day in 1947 the world would mark the passing of one of the most notorious mobsters to have ever lived. At the age of 48 The Big Shot suffered from a stroke but managed to improve from it (this was just 4 days after he celebrated his 48th birthday). However, after managing to regain consciousness from the stroke he contracted pneumonia; on the 25th January 4 days after the stroke he suffered a fatal cardiac arrest.

Al headed up the Chicago Outfit during a violent time in the mobs history, having taken the reigns from Johnny Torrio in 1925 after he was almost killed in an assassination attempt. He remained at the front of the outfit until he was finally convicted on tax evasion charges in 1932, and upon being sent to Atlanta’s U.S. Penitentiary Capone would fast lose a battle to ill health.

The Last 15 Years of Al Capone

Almost immediately after his arrival at the prison he was diagnosed with syphilis and gonorrhoea, and he was also suffering from cocaine withdrawal.

He was no longer the man he used to be but that didn’t matter to many inmates serving time with Capone, they were said to bully the former Outfit boss, and his cell mate Red Rudlinsky who used to be associated with the Outfit end up becoming a bodyguard for Capone. It was so bad that they ended up moving Capone to Alcatraz.

By now neurosyphillis had gotten a hold of Capone and his mental state began to weaken, confused and disorientated he ended up serving the final year of one of his convictions in the prison hospital eventually being released in early January 1939. The prison time wasn’t over for Capone though as he still had to serve time for contempt of court, for this stint he was transferred to California, and spent the next 10 months at the Federal Correctional Institution at Terminal Island. Al Capone was finally a free man on November 1939.

The next few years of his life would be spent in hospital for the treatment of paresis, and then back at his Palm Island mansion surrounded by close family. Paresis is a neuropsychiatric disorder which is caused by late-stage syphilis and this would become apparent a year before his death when a psychiatrist would conclude that Al Capone had the mental age of a 12 year old. 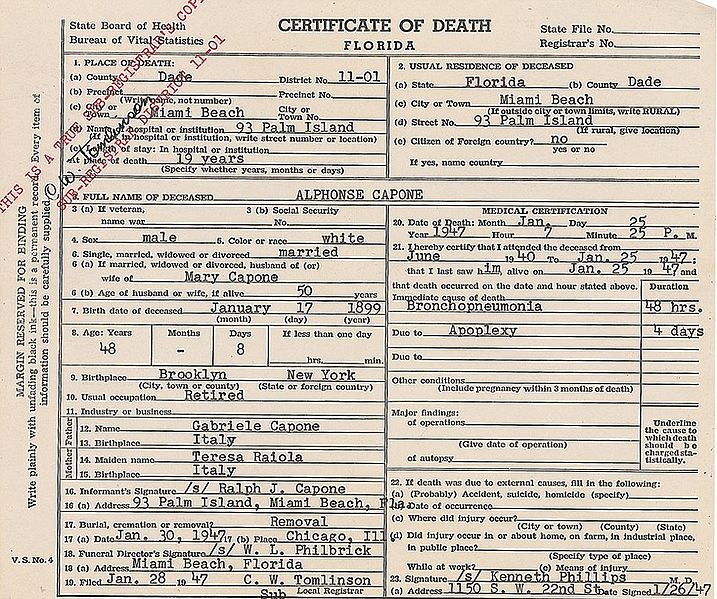 The Legacy of Capone

During his time as the boss of the Chicago Outfit Al Capone would be involved in many trials and mob related events. Capone is one of the most notorious American gangsters of the 20th century and has been the subject of numerous articles, books, and films. His personality and character have been used in fiction as a model for crime lords and criminal masterminds ever since his death. The stereotypical image of a mobster wearing a blue pinstriped suit and tilted fedora is based on photos of Capone.

From the assassination of Big Jim Colosimo, Dean O’Banion, Hymie Weiss, Frankie Yale and of course the notorious St Valentine’s Day Massacre of 1929, Capone left his mark on the world.

Over 30 victims were notched up on the board in a 4 year period.