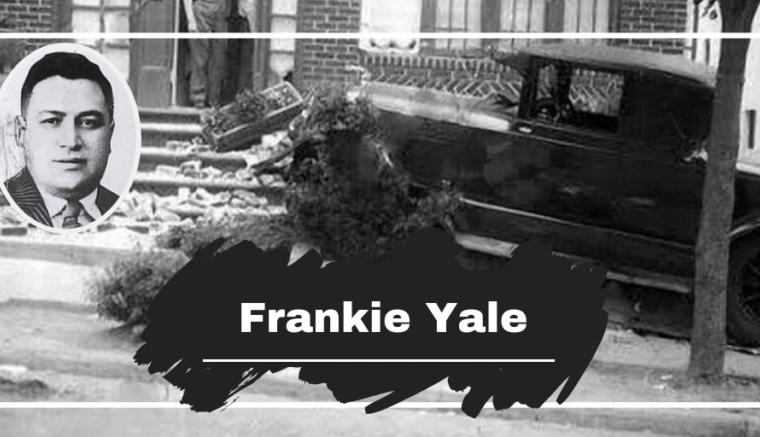 On this day in 1893 notorious Prohibition era mobster Francesco Ioele was born, and was Al Capone’s boss during the Brooklyn days. Francesco was better known as Frankie Yale and met his end in spectacular mob style, after Capone sanctioned a drive-by shooting on his old friend and boss, Yale.

Frankie was born in Calabria in Italy and spent around 7 years in the country before he would move to the United States with his family. From an early age Yale was good with his fists, and because of his bigger build he didn’t have a problem handling himself. In fact, at the age of 19 he was arrested on suspicion of homicide after he and a friend killed a number of men in a fight that broke out at the Coney Island pool hall. Billiard balls were flung at the men and pool cues cracked over their heads.

As a teenager he would meet up with one of the smartest crime bosses of all time, that being Johnny Torrio who helped build up the Chicago Outfit to control downtown Chicago in the height of Prohibition. At the time of meeting Torrio, Yale was a teenager and he joined the Five Points Gang which was led by Paolo Vaccarelli who was more familiarly known as Paul Kelly. Torrio however would go on to become Yale’s mentor.

Yale The Businessman and Mob Boss

Unlike many hot headed gangsters of the era Yale was shaped by the Five Points Gang and realized that business dealings should come over ego. He managed to setup some rackets in the Brooklyn area, and then he would go on to open up a bar in Coney Island on Seaside Walk called the Harvard Inn back in 1917.

For Capone fans the name of this bar may ring a few bells with you because this is where Al worked as a waiter in his younger days and where Frank Galluccio put a few scars across his face after making some comments to Frank’s sister. Capone only worked here for a few years though as Yale had to send him to Chicago as the young Capone needed to lie low after nearly beating to death a member of a rival operation.

Over time Yale began to build up his crew of mobsters and some say that this was the first new-styled Mafia that we know of today, where a family unit was in place. Working for him was familiar names such as Albert Anastasia, Joe Adonis and Anthony Carfano.

As well as the Harvard Inn Yale also owned a Funeral Parlour across the road from his house at 6604 14th Avenue, a legal business that allowed him to state that his occupation was an Undertaker.

The Assassination Attempts on Frankie Yale

There was an on-going feud with Yale and the Irish White Hand Gang, as well as other Italian gangs looking to make power moves in Brooklyn. This was Prohibition and there was money to be made.

Angelo Yale would eventually fade from power after the death of his brother in 1928. He would die of natural causes in 1963.

The following year in 1924 Yale was asked to come to Chicago again (he was the alleged triggerman in the Big Jim Colosimo assassination four years prior in 1920) to help Torrio and Capone get rid of Dean O’Banion. Yale, John Scalise and Albert Anselmi took part in the hit that would end the life of the North Side Gang Leader. You can read more about the death of Dean O’Banion here.

Yale’s Relationship With Capone Breaks Down

What most people get confused about when we talk about Yale’s death is that Capone was behind it. They want to know why it suddenly ended up this way.

The truth is that by the latter part of the 1920’s their friendship became tense. Initially it was down to the fact that the whiskey that Yale supplied to Capone was constantly being hijacked even before the trucks left Brooklyn. Capone was wary of this and thought Yale was up to something so he got one of his men to check things out for him. The mobster was James DeAmato and he reported back to Capone with news that it was indeed Yale that wasn’t playing fair.

Unfortunately for DeAmato he was found out by Yale but tried to shoot the Brooklyn boss, he failed, and ultimately he was gunned down himself less than a week later.

The friendship was now on thin ice but Al Capone did try and make something of it by inviting Yale to a boxing match between Dempsey and Tunney. The two got on during the meet but it was clear that the damage had already been done and things just got worse between the pair.

The Death of Frankie Yale

On Sunday afternoon, July 1, 1928, Yale was in his Sunrise Club, located at 14th Avenue and 65th Street, when he received a cryptic phone call. The caller said something was wrong with Yale’s new wife Lucy, who was at home looking after their year-old daughter. Yale dashed out to his brand new, coffee-colored Lincoln coupe and took off up New Utrecht Avenue, where a Buick sedan carrying four armed mobsters stopped next to him.

While Yale’s new Lincoln was fashioned with armor plating, the dealer had neglected to bullet-proof the windows.

Recognizing his peril, when the light changed, Yale took off.

After a chase up New Utrecht, Yale swerved west onto 44th Street, with the Buick close behind. Yale’s car was soon overtaken by the Buick. Next the hitmen opened fire on the Lincoln with sub-machine guns. This was the first time a submachine gun had been used in a Gangland killing outside Chicago and Jack McGurn was the man behind the controls.

Yale was hit and killed and his car crashed into the stoop of a brownstone at No. 923.

7 months later we then saw the St Valentines’s Day Massacre where one of the sub-machine guns that were used on Yale, was identified as being used on the 7 North Side mobsters.