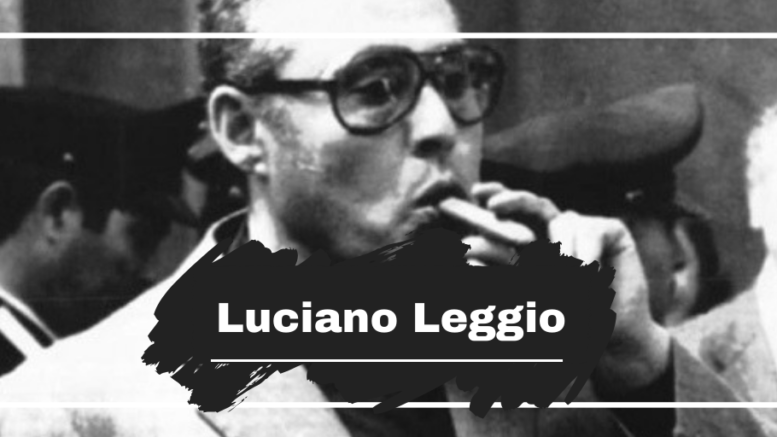 On this day in 1925 the head of the Sicilian Mafia, Luciano Leggio was born in Corleone, Siclily. He would go on to make the Corleonesi the most dominant Mafia family in Sicily, and was known as the Sicilian John Gotti because of his ability to avoid convictions which ranged from homicide to racketeering. He was a volatile and violent mobster, who wore expensive suits, wore sunglasses and always had a grand cigar hanging out of his mouth.

Luciano was born on a small farm and was one of ten children, and it didn’t take him too long before he started to lean towards a life of crime. By the age of 18 he had been convicted of stealing, and only a few years after this Michele Navarra recruited him as an enforcer and hitman. In 1945 he would go one step too far when he shot and killed a farm-hand in order to take over the farm. He then held a gun to the head of the farm owner and demanded him sign the land over to him.

During his time in prison he met another future Mafia boss, Salvatore Riina who was 19 at the time and was serving a 6-year sentence for manslaughter. The pair would go on to become a dominant force in the Sicilian underworld, along with another mobster by the name of Bernardo Provenzano.

Leggio spent the 1960s and early 1970s increasing the strength of the Corleonesi, murdering anyone who got in its way. In particular, he wanted control of the refining and trafficking of heroin that soon provided a huge source of income to the Sicilian Mafia.

The first murder trial that fell before Leggio was for the murder of Michele Navarra‘s companion back in 1958. The trial ended with him being acquitted due to insufficient evidence.

He then stood trial again in 1968 along with 113 other mobsters in relation to the Mafia War that resulted in the Ciaculli Massacre which consisted of a car bomb that detonated in 1963 killing 7 police and army officers. The trial would become known more popularly as the Trial of the 114 but ended with only ten convictions.  None of which included the Sicilian mob boss.

The year after he had to stand trial again in 1969 on charges of murdering 9 of Navarra’s men. This time he was tried alongside over 60 of his fellow Corleonesi, including Salvatore Riina, who was one of almost two-thousand Mafiosi rounded up in the mid-1960s in the aftermath of the violence in the early years of that decade.

He was finally captured in Milan on May 16, 1974, local police having tracked him down by tapping his telephone. Leggio was finally sent off to serve his life sentence for the Navarra slaying.

He is believed to have retained significant influence from behind bars, as have many other mobsters after imprisonment. However, by the end of the 1970s, his lieutenant Salvatore Riina was in control of the Corleonesi clan.

The End of Leggio

In the Maxi Trial of 1986/1987,  faced charges of helping to run the Corleonesi from behind bars, including the accusation that he ordered the murder of prosecutor Cesare Terranova, who was shot dead in 1979.

Leggio acted as his own lawyer and defended himself, cross examining Tommaso Buscetta. He claimed he had been framed for political reasons.

He was eventually acquitted of all charges due to lack of evidence, although he still had his life-sentence to serve and was returned to a maximum security prison in Sardinia. He would eventually go on to die from heart attack in November 1993 and was transported back to Corleone where he was buried.