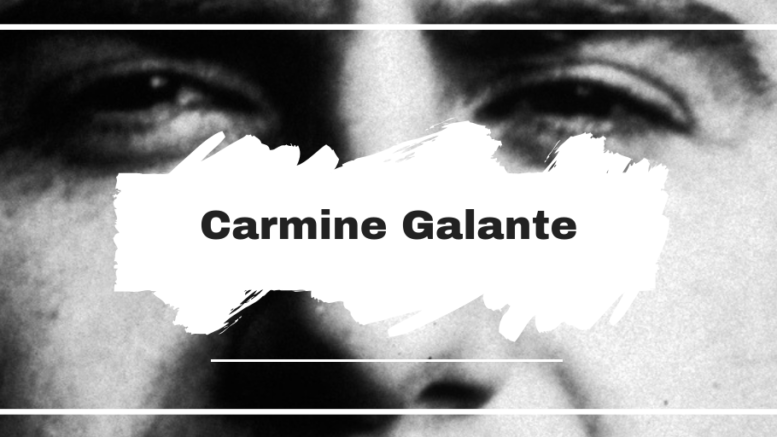 Born 21st February 1910 in East Harlem in Manhattan, he was rarely seen without a cigar, earning him the nicknames ‘The Cigar’ and ‘Lilo’ (an Italian slang word for cigar).

Galante was explosive, and whilst in prison in 1931, doctors diagnosed him as having a psychopathic personality. He was described as having a dead-eyed stare, his stare scaring law enforcement and other mafia members alike.

“Of all the gangsters that I’ve met personally, and I’ve met dozens of them in all of my years, there were only two who, when I looked them straight in the eye, I decided I wouldn’t want them to be really personally mad at me. Aniello Dellacroce was one and Carmine Galante was the other. They had bad eyes, I mean, they had the eyes of killers. You could see how frightening they were, the frigid glare of a killer.”

Even at the age of 10 Galante was a local criminal, he was sent to reform school, when he was 15 he was sent to prison for 2 and a half years, then in August 1930 he was arrested for the murder of prison officer Walter DeCastilla, however Galante was never indicted.

On February 8, 1931, after pleading guilty to attempted robbery Galante was sentenced to 12 and a half years in state prison. On May 1, 1939, Galante was released from prison on parole.

By 1940, Galante was carrying out ‘hits’ for Vito Genovese, the underboss of the Luciano Crime Family, the NYPD suspected Galante for over 80 murders.

Galante went from being chauffeur of Bonanno family boss, Joesph Bonanno to caporegime and then to underboss. He was said to have been loyal to Bonanno and often spoke of him with great admiration. They also shared the same enemy Carlo Gambino.

In 1953, Bonanno sent Galante to Montreal to supervise the family drug business. The Bonanno’s were importing huge amounts of heroin by ship into Montreal and then sending it into the United States. However in 1957, due to Galante’s strong-arm extortion tactics, the Canadian Government deported him back to the United States.

October 1957, Bonanno and Galante held a hotel meeting in Sicily on plans to import heroin into the United States. Those at the meeting included Charles ‘Lucky’ Luciano and other American mobsters. As part of the agreement, Sicilian mobsters would come to the U.S. to distribute the narcotics. In 1958, after being indicted on drug conspiracy charges, Galante went into hiding.

By the late 1970’s, and after numerous times in and out of jail, Galante was looking old. He was now bald, bespectacled and had a stooped walk.

Although Galante was aware that he had many enemies, he said,

“No one will ever kill me, they wouldn’t dare.” On July 12, 1979, Carmine Galante was dining at Joe and Mary’s Italian-American Restaurant in Bushwick, Brooklyn, with Leonard Coppola, a Bonanno capo, restaurant owner and cousin to Giuseppe Turano, also at the table were Galante’s bodyguards, Amato and Bonventre. At 2.45pm, three ski-masked men entered the restaurant and opened fire with shotguns and handguns, Galante, Turano, and Coppola were killed instantly. Galante’s death picture showed a cigar still in his mouth. Amato and Bonventre, who did nothing to protect Galante, were left unharmed. The gunmen then ran out of the restaurant.

The Roman Catholic Archdiocese of New York refused to allow a funeral mass for Galante due to his infamy, he was buried at Saint John’s Cemetery, in Queens.