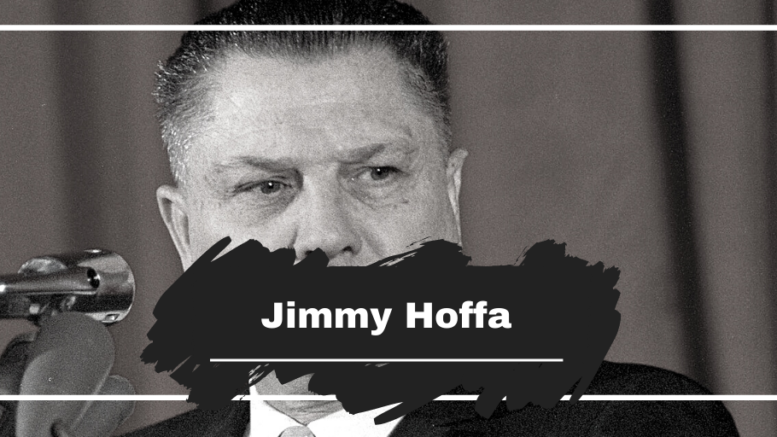 Jimmy Hoffa was born on February 14, 1913, in Brazil, Indiana. His father was a coal miner who died when he was still young. His mother went to work to support Hoffa and his three siblings, eventually moving the family to Detroit. His education was limited, he dropped out of school to help out with his family.

Hoffa went to work on a loading dock for a grocery store chain, there he devised his first labor strike, he used a newly advised shipment of strawberries as a bargaining chip, the workers would not unload unless they had a new deal.

In the 1930s Hoffa joined the brotherhood or teamsters he became the president of the union’s Detroit chapter, he was ambitious and aggressive.

Hoffa married Josephine Poszywak in 1936. The couple had two children together, Barbara and James.

His efforts within the union worked, he was made vice president of the entire union in 1952. Five years later he was to become president of the union. Hoffa was the subject of numerous investigations but managed to avoid prosecution for years.


In 1961, he scored one of his decisive victories, Hoffa brought together almost all of the truck drivers in North America under one contract. Both FBI and US. Attorney General Robert F. Kennedy kept a close eye on Hoffa, believing that he advanced himself and his union with assistance from organized crime.

The Justice department marked Hoffa many times, each time failing to win their cases against the popular leader, However in March 1964 he was found guilty of bribery in connection with his 1962 federal trial for conspiracy. That July, Hoffa suffered another blow. He was convicted of mis-using funds from the union’s pension plan.

Hoffa spent three years appealing his convictions, but these efforts proved useless. He began serving a 13-year prison sentence in 1967. President Richard Nixon in 1971 however commuted his sentence, on a condition that Hoffa was banned from holding a leadership position in the union until 1980. However, Hoffa wasted no time trying to fight that ban in court and working behind the scenes to regain control over the Teamsters.

It was no surprise that during his life Hoffa made many enemies, July 30th 1975 Hoffa left his Detroit home for a meeting to settle a feud with a local crime figure and a mob-connected union leader from New Jersey at a restaurant, Hoffa was the only one who showed up. What happened to the former union boss after that remains a mystery. His car was found in the restaurant’s parking lot, but there were no clues to Hoffa’s whereabouts. Hoffa was declared legally dead in 1982. No body had ever been found despite authorities having received tips to the location of remains.

His disappearance has been subject to several theories some say he was done with organized crime. Alleged crime figure Tony Zerilli, stated that Hoffa was hit on the head with a shovel and then buried alive. Investigators have yet to unearth any evidence in this allegation.

Barbara and James P. Hoffa have publicly campaigned for further investigation into their father’s disappearance. James has also followed in his father’s footsteps, serving as the president of the Teamsters Union since 1998.