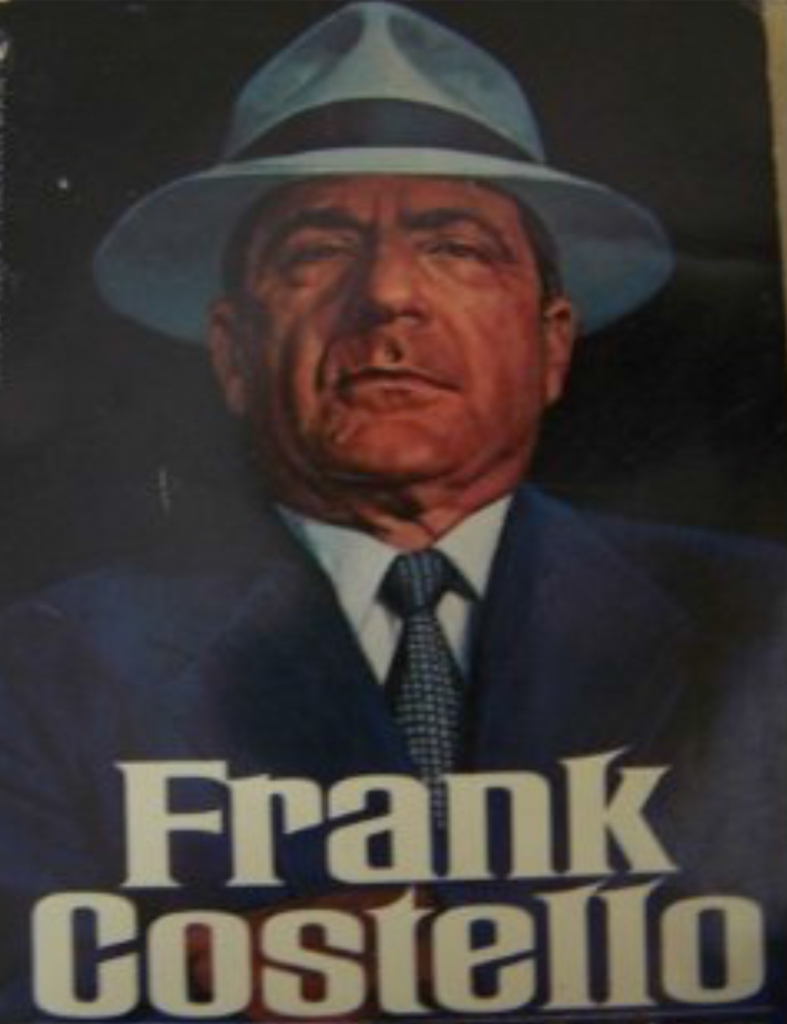 On Sunday, Febuary 18th, 1973, Francesco Castiglia committed his final crime. The man who had stolen from society all of his life would rob us one last time. Peter Maas, the author of the Valachi Papers, Underboss and Serpico, had just received what was at the time, the largest advance in history for a non-fiction book, with the promise of delivering the authorized biography of the man behind “the hand ballet.” Frank Costello, the one Lucky Luciano chose to run his empire, the guy who taught the canary how to fly, and the man who earned the sobriquet, “the Prime Minister of the Underworld,” was finally going to spill the beans, and give up his side of the story. Then on that Sunday in February, Maas received a call from Charlie “the Blade” Tourine, simply saying, “He’s gone.” And so was the book…

Costello robbed us of the chance to read what I believe would have surely been a classic in the true crime genre. Uncle Frank, and The Prime Minister Of The Underworld, are good reads, and though out of print they are easy enough to find, but they could never compare to reading what the boss would have had to say in his own words. Fortunately, he was one of the more well documented figures in this dark history, and news reels, as well as a scattering of documentaries and magazine articles exist.

Over the years I have waded through all of the material I could get my hands on, and as a result, I have accumulated a small cesspool of useless Frank fun facts. At least I thought they were useless. It turns out, a lot of true crime buffs, even ones with cesspools that run much deeper than mine, have never heard some of this Mafia lore. I suppose that makes sense. His name doesn’t tend to turn up with the likes of Al Capone, Charlie Luciano, or Ben Siegel. In fact, he is rarely, if ever, mentioned in movies at all; even those about Lucky, Lansky, and Bugsy, (I’m looking at you, Boardwalk Empire!) To me, it is akin to telling the story of the Beatles, as if they were a trio.

The NCS as been kind enough to allow me this platform, and they say write what you know, so that’s what I am going to do. My intent here is to compile, through a series of short articles, what I think are the best of the stories I have come across about Costello, and put them in one place. Do I believe them all? No. Tales grow taller on down the line, but these are the ones that have endured, and I hope that you enjoy them as much as I have.

This is for you Frank… 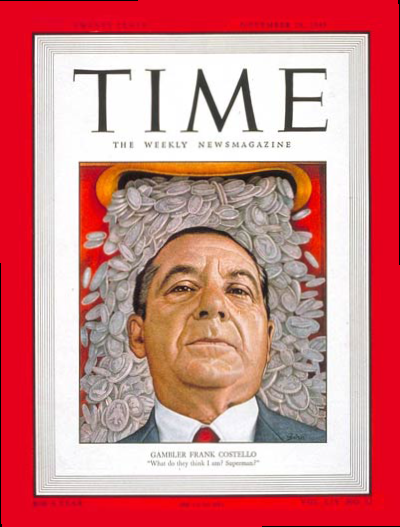 I once read an interview with Keith Richards where he explained he didn’t have a drug problem. He had access to, and could afford all of the drugs he wanted, so where was the problem? I view Costello’s considerable gambling habits in much the same way. He was a man who had a suitcase containing one million in cash, stashed away in case of emergencies. Money was not an issue, so out of respect for the boss, let’s call his gambling a passion, not a problem. He bet big, and loved the element of risk that was involved. I believe this is what made him a successful business man, but also a successful criminal.

“I always gotta’ have some action.” he declared.

Upon entering his living room, one of the first things guests would notice was a slot machine. Frank would give each guests a nickel to play, and the machine would always pay out. When his guests handed back their winnings, he would refuse the gesture saying,

“What do I look like, some kind of punk? Nobody loses in my house.”

The next thing they noticed were several televisions, each tuned to a different game. Then the radio, probably tuned to a fight. Frank would keep track of all of these, having thousands of dollars at stake on each, as well as his constant chain of phone calls concerning the “action” he had going at numerous tracks at any given time. His favorite thing to bet on was a special boxing match promoters would put on after the main event in what was then the mafia’s favorite retreat, Hot Springs, Arkansas. Five blindfolded men would enter the ring and punch it out until only one man was left standing. Frank loved the unpredictable nature of this bout and felt a certain sense of pride when he picked a winner. Nothing was off-limits when gambling was concerned, and he was also known to bet on such trivial things as where the first snow flakes would fall in the city. 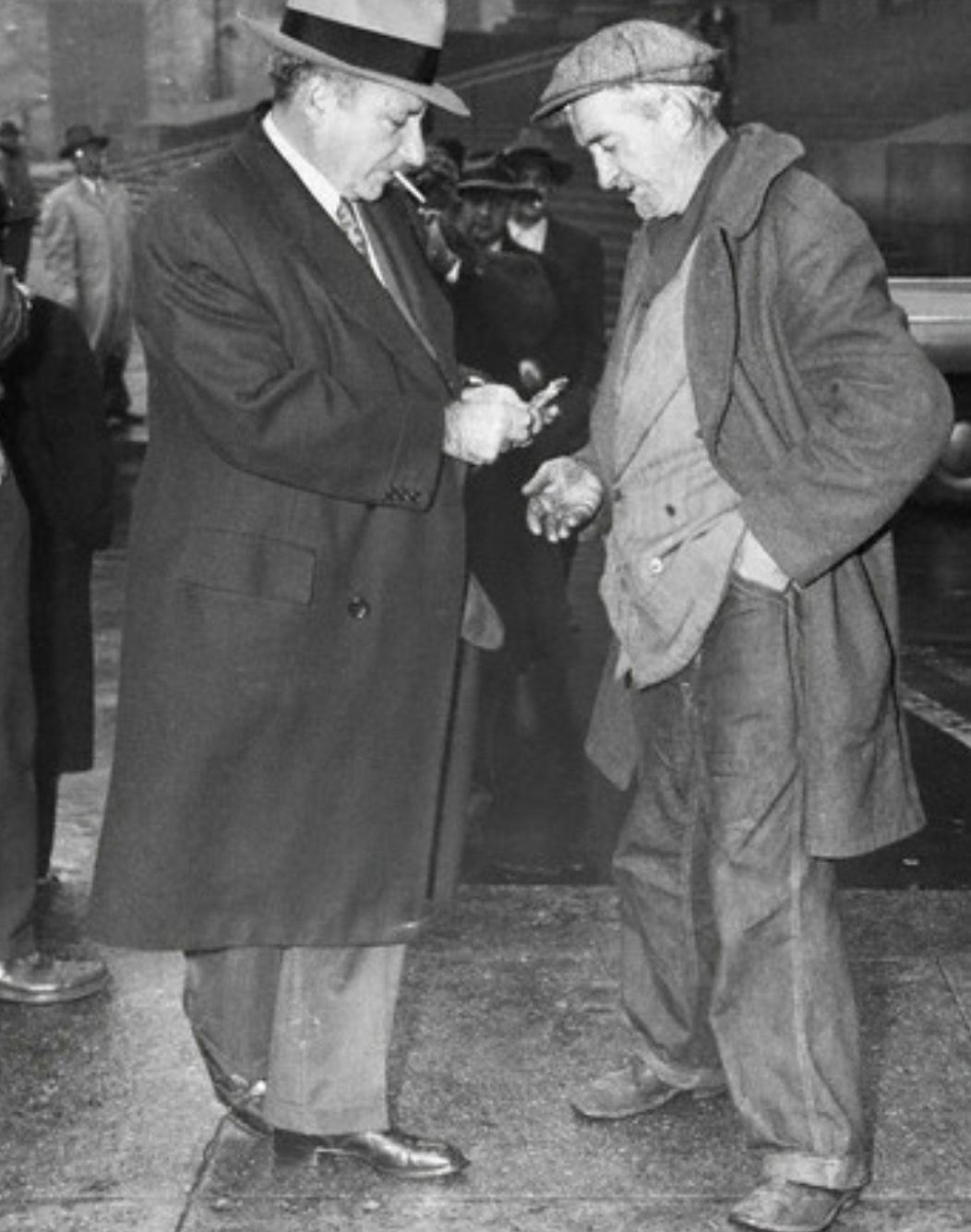 When Costello went to the track (which was often), he carried his gambling money in one pocket, and his lending money in the other. If someone borrowed money from him, he always slipped in an extra one hundred dollar bill, then waited to see if the borrower brought it to his attention. If they did, they went up a notch in the boss’s opinion, if not, Frank figured he had learned a lesson cheap. (For a brief period his pockets were not so deep. He had been tipped off that the cops were going to plant evidence on him so he had his tailor sew them up!) Most of his friends shared a similar, unpleasant experience when joining Costello at the track. This usually only happened once, as most of them were smart enough to learn their lesson.

People assumed Frank always had some inside knowledge on a race, so they would put down a heap of cash right alongside him. Costello, however, didn’t want the inside scoop. He was after all, a gambler, and wanted to win on his own accord. As a result, many of his friends suffered huge losses right along side him. His lawyer, George Wolfe, recalled one incident where, Frank encountered August Belmont at the track that bears his name. Frank was sure he had a winner, and suggested August bet with him. Belmont insisted he had a winner and the two agreed to wager on the race. No sum had been decided on, and minutes before the event Frank turned to Belmont, sitting in his box some distance away.

Costello held up two fingers and August nodded his head in agreement. Frank’s horse came out on top and he later joined Belmont to collect his winnings. The millionaire pulled two dollars from his wallet and handed them to a very unamused Costello. “It was two thousand!” Frank demanded, but the astonished Belmont refused to pay. The boss had to be pulled away by friends, but not before accusing August of being a “welsher,” the worst thing you could be in Frank’s eyes. The mob boss was later asked not to return to the track. (Being banned from establishments became increasingly common for Costello as his notoriety grew.) He was asked to not come back to the Biltmore steam baths by the manager, when some of the customers had complained that a character like Frank was allowed to frequent the spa. Costello politely left, but received a frantic phone call from the manager the following day.

It seemed the entire staff had failed to show up for work and would, “Mr. Costello please come back?” (He did.) 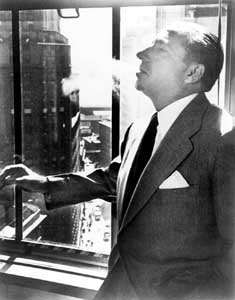 Golf was another passion of Frank’s. He often played with Babe Ruth, who was constantly borrowing money in an effort to solve his continual financial woes. During one round, Ruth asked for five thousand dollars, but Costello was hesitant to lend him the money, knowing he would never see it again. He suggested they bet the cash on the next hole, figuring Babe, the much better golfer, would win the money anyway. Frank made his first ever birdie and won. He still lent the five thousand to Ruth, but never saw it again.

The Prime Minister’s name became so synonymous with all things gambling, later in his retirement, the Yugoslavian government approached him to take charge of plans they had to build a Vegas style casino/resort. To everyone’s astonishment, Costello turned the offer down flat. “You can’t trust a government.” he explained. “One day the army might come in and take over. Then, not only are you out of business, you become part of the killing.” He recommended Meyer Lansky, stating he would be perfect for such a job, but they were only interested in him. Many believe the reason he turned the offer down was the agreement he had made with Don Vitone. In exchange for his life, Frank would retire for good.

And finally we get to what had to be Costello’s strangest gambling habit of all.

Apparently, Frank was the champion at maintaining the longest, continual urine stream. He bet, and won, thousands of dollars proving it. I once visited Frank’s old haunt, the Waldorf Astoria in New York City. While using the restroom in the lobby I couldn’t get that story out of my head, for he had probably made wagers in that very restroom at one time. Fortunately I was alone, as I began to chuckle to myself recalling my favorite all time Costello quote.

“Most men I know, pissed away their fortunes. I’m the only one I know, that made a fortune pissin’.”

Now there’s one for the NCS mobster quotes page.

Food to Die For: Eat Like a King of Crime in New York City