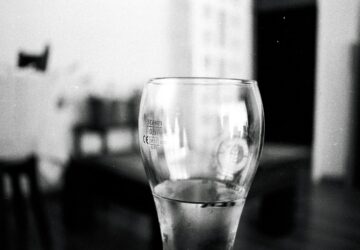 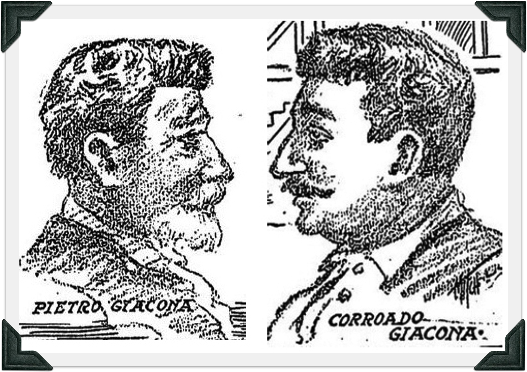 “Pietro, I thank you and your son for the hospitality and the wonderful food, but this saddens me very much. We are friends and what I ask is not such a terrible hardship on a successful man like yourself. Please just say you’ll pay us the money and things will be as they always have been.”

The men sat on the back porch of Pietro’s home. Pietro’s son, Corrado, sat next to him at the table holding a small glass of red wine. The man who was thanking Pietro for his hospitality was named Ciro, and he had only minutes left to live. Pietro had invited the men to a midnight supper to discuss the situation at hand, and they had talked for the last two and a half hours over food and wine that Pietro had supplied for the occasion.

Much of the Veaux Carre, wasn’t much more than a slum, but Pietro and his family lived in a somewhat nicer part of the French Quarter. A successful wine importer and merchant, he was able to provide a better life for his family. They had bought the house shortly after arriving from Sicily in 1904, and had set up business almost immediately. The space under the house was perfect for storing wine, and they used it for this purpose. It was agreed that Corrado, would be the face of their business and they had painted a sign on the lower wall under the front porch that read:

Pietro’s house was once occupied by the family of Confederate General, P.T. Beauregard, and it was popular with the locals. Many people would stop to look and appreciate his house as they took their evening passeggiata, and it made him proud that he was able to afford a nice place to live. He had been moderately successful in Palermo, but in the four years since he had come to New Orleans, he had done very well. 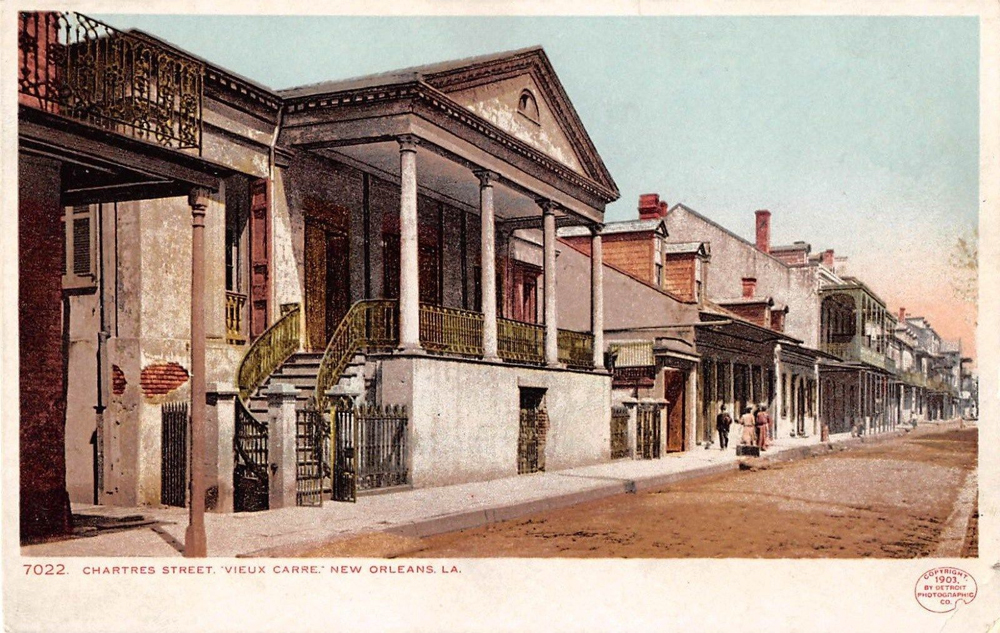 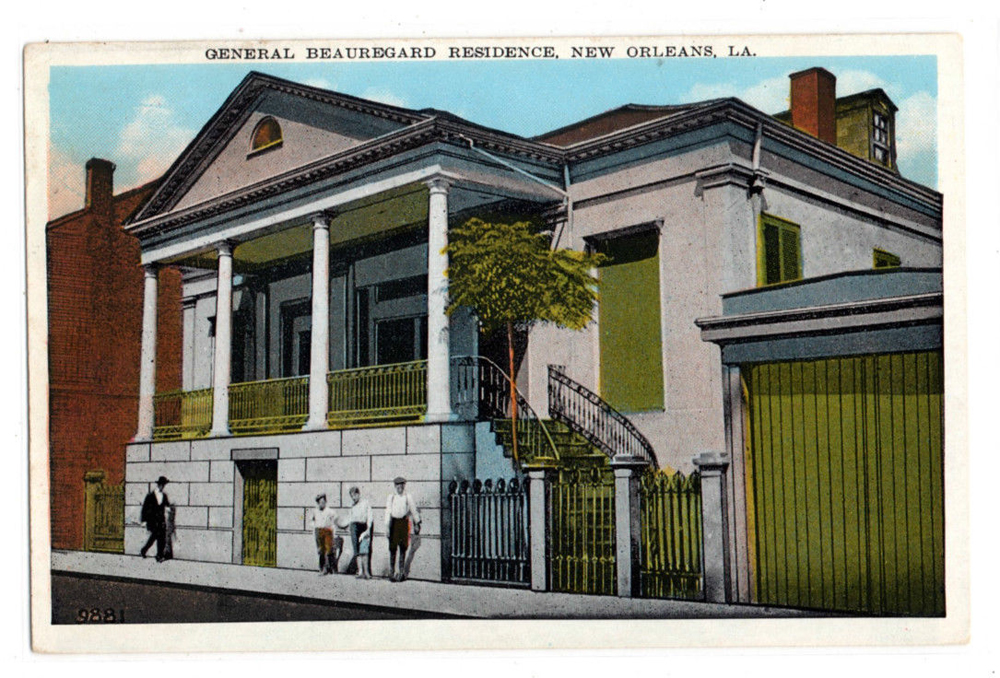 Postcards of the Keyes Beauregard house from around the time of the shooting.

“Corrado, please pass me the wine.”

Pietro poured himself a small glass. Before he took a sip he spoke to the the men before him, but looked at Ciro. “My friends, I am sorry but I just can’t afford to pay you for your protection any longer. It’s barely been a week since I gave you three hundred dollars, two weeks before that was one hundred, and now here you are asking me for FIVE THOUSAND DOLLARS! I just can not afford this kind of money. I am sorry and hope this will not affect our friendship, but I have other concerns to think of.”

Pietro took a long slow sip of his wine and stared into Ciro’s eyes. Ciro finally realized that he was not going to be successful in his attempt to extort such a sum of money from the Giaconas. As he spoke to Pietro his voice took on a hard edge. “Can you afford to have your boy here,” he glanced at Corrado, “found floating in the Mississippi?” Ciro leaned back in his chair. “Can you afford to have your business go bankrupt when all your shipments of wine come off the docks in broken bottles?” Can you afford to have your house burned down around your ears with your family in it? Can you afford to be shot on your front porch while you enjoy the sunset?” Ciro referred to a few nights prior when Pietro and Corrado, were sitting on the front porch in the waning light of dusk and shots rang out digging themselves into the front face of the building, narrowly missing both of them.

This was what prompted Pietro’s invitation to the men, and may have been the motive behind the attempted shooting in the first place. Ciro let a heavy silence hang for a moment and then spoke in a low voice, almost whispering…

“You WILL pay us the money!”

As the hour was so late it was quiet and deserted on the streets of The Quarter. A few moments after Ciro made his last statement to Pietro, the silence was ripped apart by several loud blasts coming from behind the house at 1113 Rue Chartres. A few seconds after the last blast a figure emerged from the carriage house, and in a half walk, half stagger, made it’s way down the driveway which exited onto Rue Ursilines. The man that emerged onto the street was holding his arm to his chest. Droplets of blood, which looked black in the dim gaslight from the street lamps trailed behind the figure as he left the house behind him. Lights were coming on in the houses on the street, and voices could be heard calling out, asking what had happened. It was a warm but breezy night on the 16th of June, 1908.

As with most stories of this type there are at least a couple of different versions and then, probably, the truth which died with those that were there a long, long time ago.

Ciro Cusimano, Giovanni Barreca, Francisco Vattali and an unidentified fourth man were invited to the Giacona house for a midnight meal, and to discuss the amount of money the four Blackhanders would get from the Giacona family. The meeting was prompted by the attempted shooting a few nights before at the front of the house. There’s evidence that Giacona, knew the men as he had shipped them wine on previous occasions. It appeared that the men had been successful in getting Pietro Giacona, to pay them on at least a couple of occasions, and it now seemed as if, having dug their claws in, they weren’t about to let go. There was speculation that the Giacona’s set it up with the intent of the outcome being that they would rid themselves of the men trying to suck them dry. Pietro’s statement was that he had gone into the house to grab a Winchester .35 caliber repeating rifle, and as he was coming back onto the porch he saw Ciro Cusamano draw a revolver and raise it as if to shoot his son Corrado. The elder Giacona opened fire on the four men dropping two instantly. One made for the steps of the porch but was caught as he descended the stairs. The fourth man somehow fled from the porch and through the carriage house onto the street which ran beside the property. The three dead men were Cusimano, Barreca and the unidentified man. Vattali was the one who escaped to the streets, but with a wound in his chest. He was found an hour later in a shed on St. Philip Street, near Bourbon Street. He had the breast of a freshly killed chicken pressed to the wound in an effort to reduce the pain. It’s not known where he got the chicken breast but it was evident he had help in the time between leaving the Giacona house and being found. He was taken to Charity Hospital. I’ve been unable to verify if he survived. Pietro and Corrado were arrested for murder. 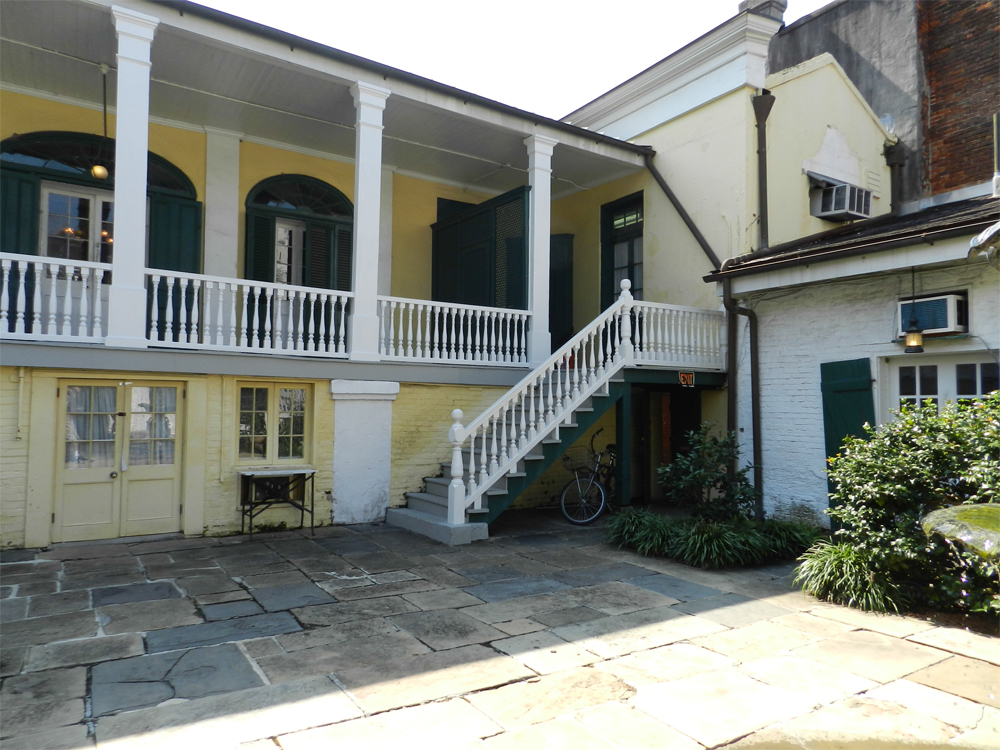 A view of the porch where the shooting happened and the stairs Vattali used to flee the scene. 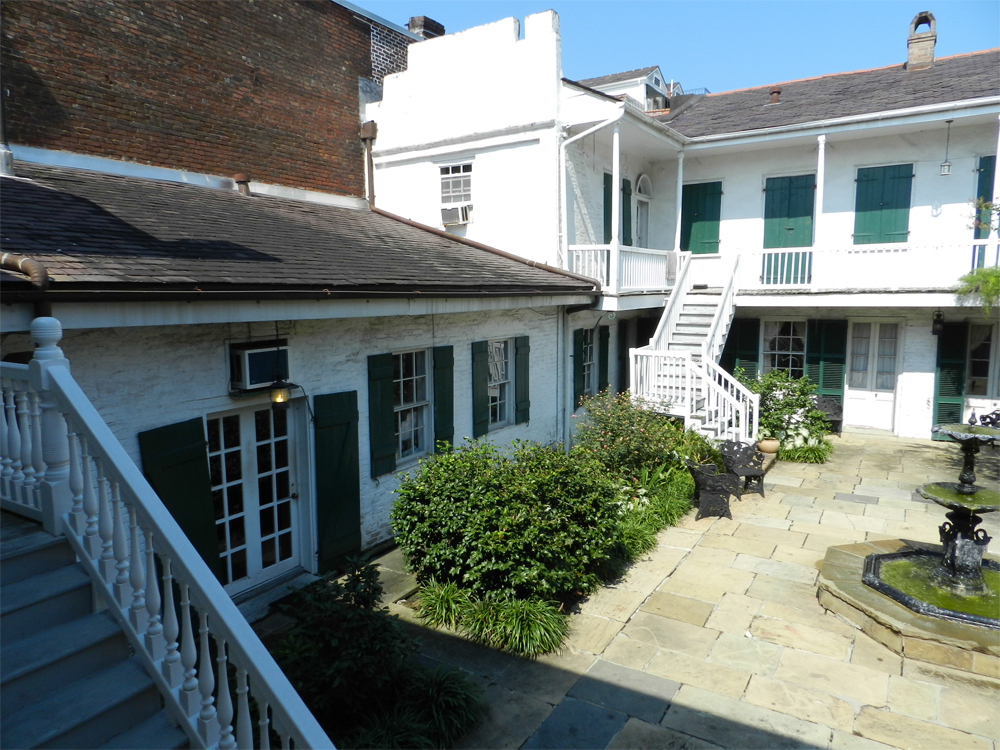 A view of the carriage house that Vattali escaped through. 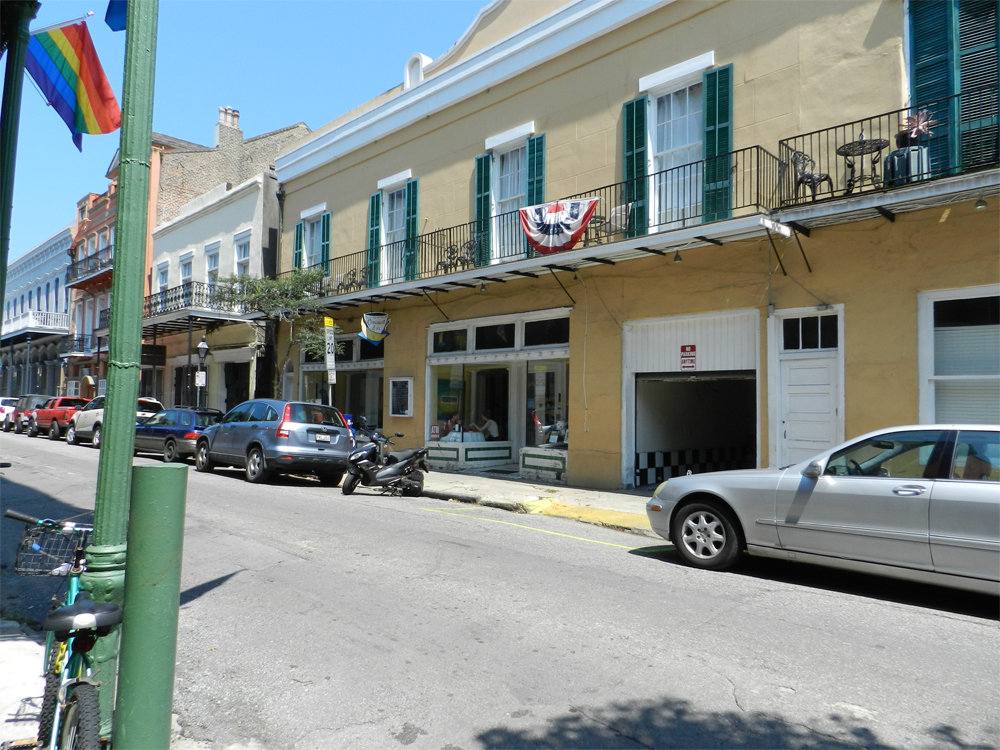 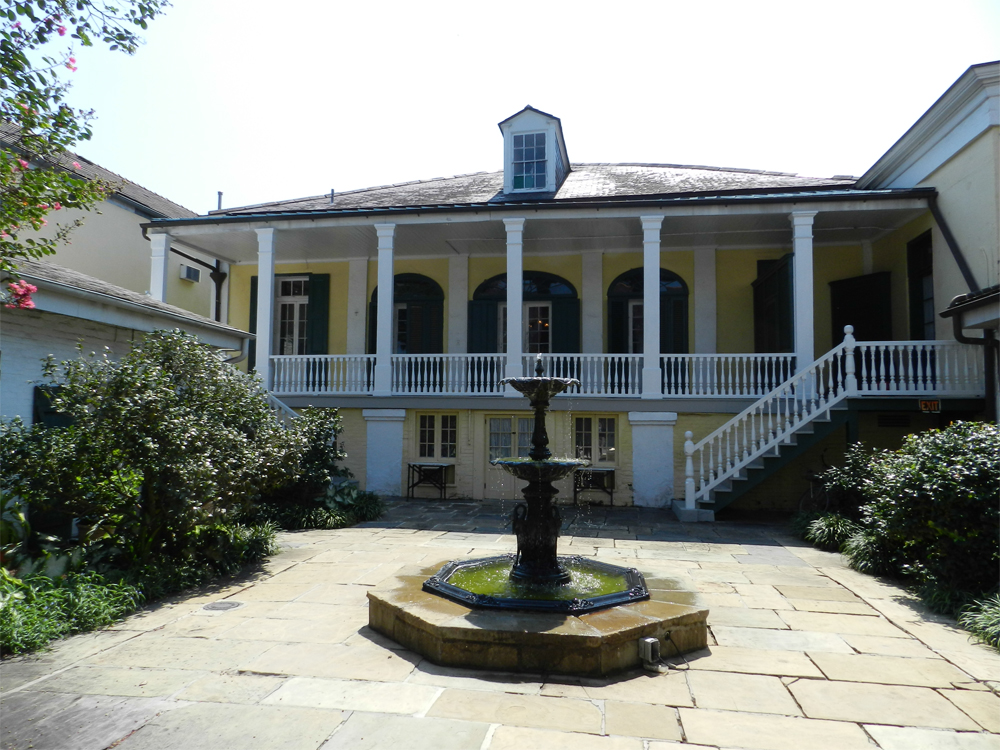 View of the porch from the courtyard. The shooting took place to the furthest right of the porch. 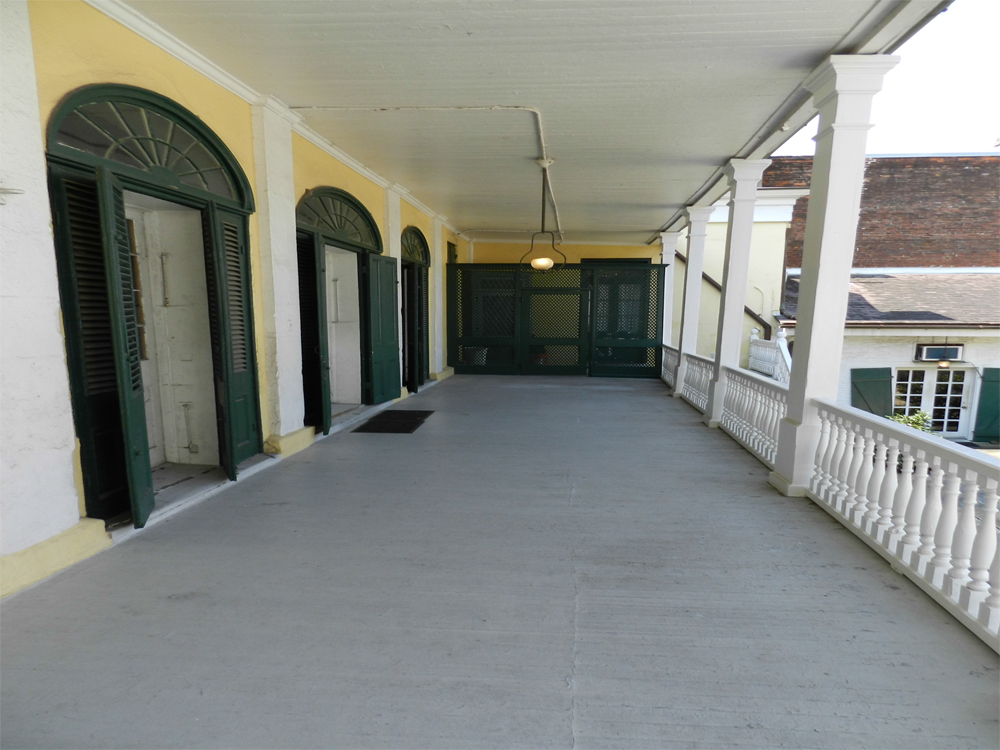 The porch where the shooting happened.

Another version has three of the men, minus Vattali,(the Giaconas denied he was there that night) calling on the Giacona house at 10:30 that evening under the pretense of checking the shipping status of a barrel of wine that Barreca, had purchased earlier that day. The visitors claimed they were hungry and so a small feast was prepared. Over the food and wine the three men demanded money and they were given five dollars, but this did not satisfy them and they continued to talk until around two thirty in the morning when suddenly one of the visitors cried out “Give it to them. You can’t afford to wait any longer.” Cusimano drew a .35 caliber Smith & Wesson revolver and fired one shot before being gunned down.(The revolver was found by the police with one round fired).

A few weeks later on Thursday, July 23, 1908, Pietro’s daughter, Jennifer heard someone trying to get through the side gate at around 10:30 pm. Pietro grabbed his shotgun and blasted into the alleyway through a parlor window. There was fear that someone may try to blow the house up in a reprisal for the events of June 16. Whoever it was at the gate fled unharmed.

On August 6, 1908, Pietro and Corrado were indicted for murder by the Grand Jury. The case against them was eventually dropped on May 20, 1910.

Pietro died January 27, 1917. His widow, Crocifissa Pitta, and son Corrado, sold the house in 1925 to a man named Antonio Mannino, who was married to a Giovanina Giacona.

So were the Giacona’s part of the local Mafia at the time of this shooting? I don’t know. Very little info is out there on these guys. We know Pietro came from Palermo. Charlie Matranga, who was in firm control of the local Mafia at this point, was of the Stuppagghieri faction which had it’s roots in Monreale Sicily, which is a small town in the hills that overlooks Palermo. A couple of decades before, Matranga’s faction was at odds with the Mafia which had it’s roots in Palermo.

At that time Joe Esposito most likely controlled the Palermo faction. But sometime after the lynching of 1891, Matranga took full control of the New Orleans Mafia until 1922, when he retired. I’m sure it was entirely possible, and most likely, that any differences were put aside so a smooth, peaceful operation could move forward. It would greatly help to explain why it was Corrado Giacona who took over as boss of the New Orleans Family, when Matranga decided to retire. Giacona ran things (along with Silver Dollar Sam Carolla who acted as street boss) until his death on July 25, 1944. His underboss, Frank Todaro, succeeded Giacona but himself died about six months later. 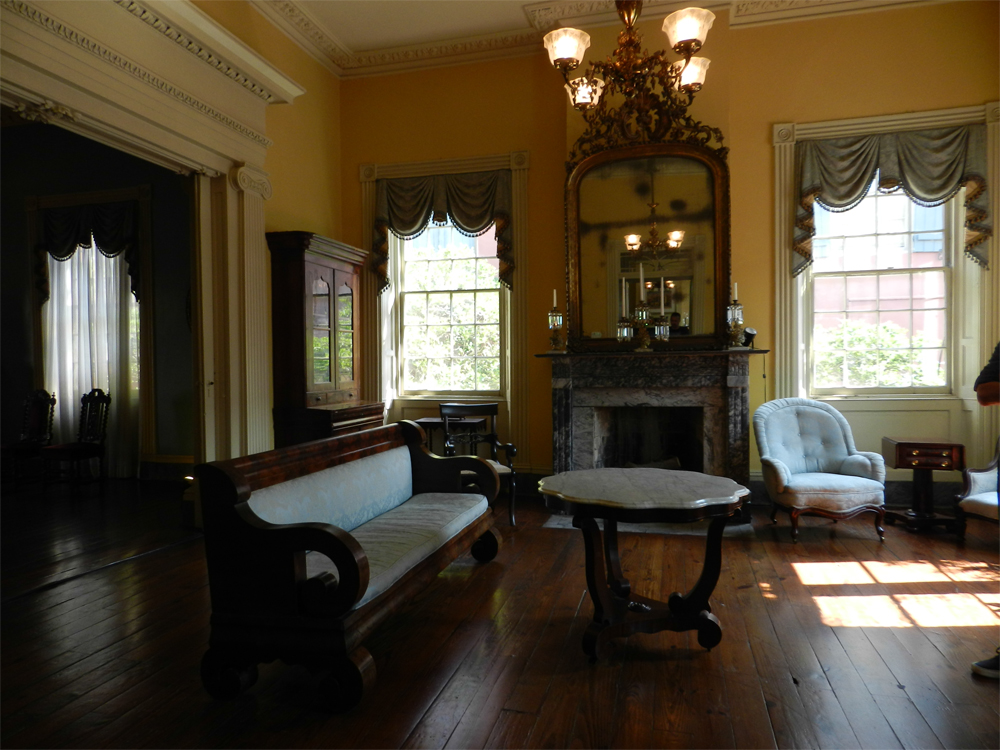 Pietro shot through one of these windows at the intruder trying to enter the gate. 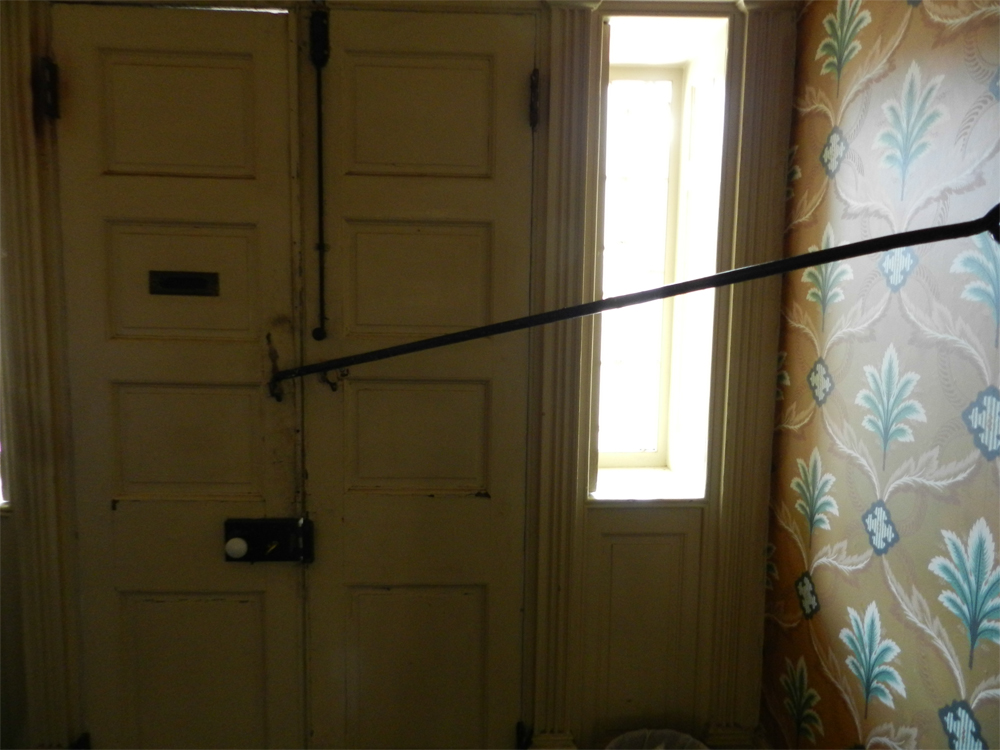 The Giacona’s installed this security bar on the front door after the attempted break in at the side gate.

Some side notes:
Apparently it’s Pietro who was responsible for all of the shooting on the back porch. Corrado supposedly never fired a shot. Pretty good action for an old man against four other men in the
dark by candle/lantern light!! The first two men to be killed were thought to be sitting judging by the angle of the wounds and the angle of the shots that missed and hit the structure of the house. 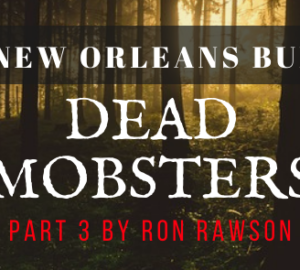