Between the 16th and 19th centuries, Naples was vying with Paris as Europe’s second-largest city. The Camorra, whose origins may date back to 15th century Spain (in Spanish Camorra means to quarrel/brawl) are the oldest of Italy’s Mafia organizations and became prominent in and around Naples during the early 19th century.

Folklore provides us with several tales as to where their name came from.

One such tale refers to a Spaniard, Raimon Gamur who emigrated to Naples. He subsequently ended up in prison where his name is said to have been given to a secret criminal organisation.

It is suggested the Camorra first came together in the dark and dingy prisons of Naples in and around 1830. Prisons such as San Francesco and Santa Maria Apparente or Santo Stefano, Ponza and Procid. Released prisoners ensured the Camorra were transferred to the streets of Naples.

Another definition is that ‘Camorra’ comes from the Latin for treasurer, camerarius.

My own preference is one that talks of the Spanish gamurri:

“The origin of the Camorra is undoubtedly Spanish, and the camorristi of today are the descendants of a special class of Spanish brigands known as gamurri from the short coat or pea-jacket they used to wear. They were ordinary highway robbers, but banded together under a sort of military rule, with special laws and customs, and very often they were in league with some of the police.”1

However, the first time the word Camorra appeared in official documents was when a new Act of government was introduced in Naples in 1735. It was used in reference to a traditional Neapolitan street game after the Bourbon regime authorised the opening of eight gambling houses. The Act was implemented to appease Neapolitans who had seen their street game ‘morra’ made illegal. The move led to players of the game being forced to pay protection to stop the police intervening. The ‘Ca’ of Camorra being short for capo (boss). ‘Boss of morra’.

The Bourbon regime in power at the time had left the Camorra to their own devices. But! Only if the Camorra could be called upon when needed by the regime. In fact, the police, especially in over-populated Naples were inadequately resourced and ineffective. So much so the local government of the time had even employed the Camorra to investigate crimes. Local merchants began hiring Camorra to supervise the unloading/loading of goods.

In 1848 the Camorra entered politics. By the time of the unification of Italy in 1861 the power and influence of the Camorra, along with their illegal operations had grown sizeably. They were embedded within the corridors of power in Naples.

When Francis II of Bourbon, who was the last ruler of the Kingdom of Two Sicilies [sic], abandoned Naples before the arrival of General Giuseppe Maria Garibaldi, he left it to his prefect Liborio Romano to bring Naples under order. Romano called a meeting with the first true head of the Camorra, Salvatore de Crescenzo (aka Tore ‘e Crescenzo) and made him an offer he couldn’t refuse.

Romano had felt that the best way to keep law and order in Naples was to have known members of the Camorra alongside him. The offer to the head of the Camorra was he could bring in as many of his own men as he wished, and he and his men would also receive a salary from the government. Along with amnesty for their past and future illegal activities. Within an hour Tore ‘e Crescenzo agreed terms with the prefect of Naples Liborio Romano.

Prior to the unification of Italy on March 17, 1861, the number of men in the City Guard had swelled to over 12,000. It is anyone’s guess as to how many of those were Camorra. The release from prison in 1860 of hundreds of Camorristi had swelled their ranks considerably.

Moves began for the Camorra to be removed from these influential positions. The first task was to disband the City Guard. These were replaced with public security guards. Minister of Police, Silvio Spaventa was the man tasked with the job.

In 1863 a new Act was passed, the Pica Law (named after the Apulian politician that signed the Act, Giuseppe Pica). Implemented on August 15, 1863, the Act enabled the Italian authorities a “procedure for the repression of brigandage and of the Camorra in the infected provinces”. Hundreds of suspected Camorrista were sent to prisons, without trial, on the islands of Ponza and Santo Stefano. In 1877 a concerted effort was made to rid Naples of the Camorra when over 40 top Camorristi were arrested.

However, with the power of the Camorra in the corridors of government, the exercise proved futile. A decade before the end of the 19th century the government of Naples was dissolved. A royal commissioner was appointed. Then, following a government inquiry, the Honest Government League was formed.

The Reale Commissione d’Inchiesta per Napoli (Royal Commission of Inquiry into Naples) was also known as the Saredo Inquiry chaired by the president of the Italian Council of State Giuseppe Saredo. A media campaign by the then new Socialist newspaper La Propaganda began in 1899 and targeted the political corruption in Naples. 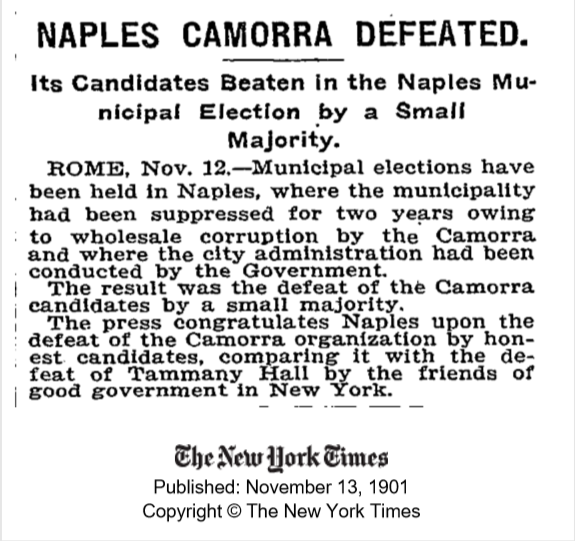 Their main targets were Alberto Casale, a member of the Italian Chamber of Deputies who had extensive contacts in the Camorra and the Mayor of Naples Celestino Summonte. As a result of the inquiry, twelve people were convicted including Casale and Summonte.

At elections the following year (1901) the Camorra had been defeated and the politicians sympathetic to the Camorra were voted out.

However, the following day a journalist claimed the council would not destroy the influence of the Camorra. 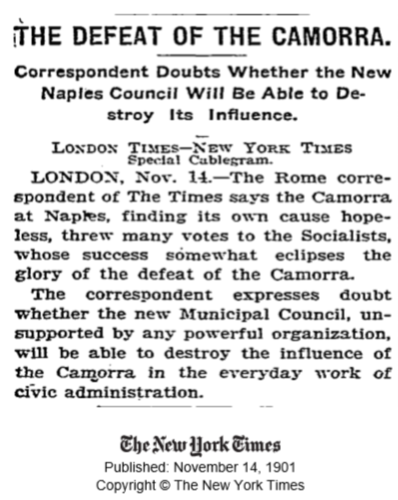 The correspondent was proved correct. In June 1902, the Camorra were back in politics. 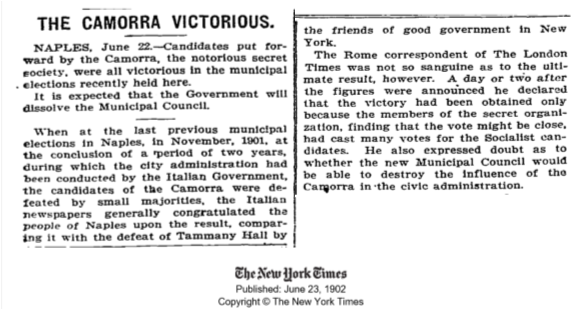 In 1911, a trial began for the murder of Camorrista Gennaro Cuocolo (and his wife). Journalist Walter Littlefield, whilst covering the trial in Italy, wrote in the March 5, 1911 edition of The New York Times

“… But the greatest drama will be played in the little town of Viterbo,… where the Italian Government hopes to deal the death blow to the greatest criminal organization that the world has ever seen – the Honorable Society of the Camorra of Naples”. 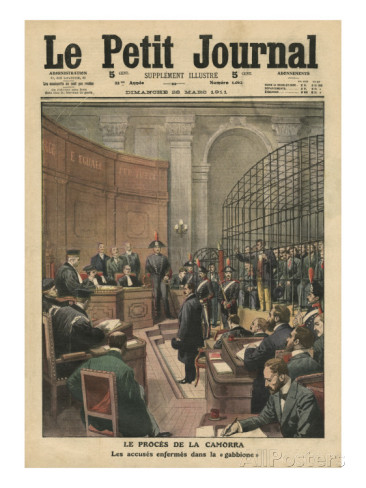 Cuocolo’s lifeless body was discovered in Torre del Greco on June 5. The body of his dead wife was discovered at their home. The murder trial soon turned into a trial against the whole of the Camorra and became a worldwide news story, especially in America. A man charged and convicted of the Cuocolo murders was one of the Camorra’s top bosses. 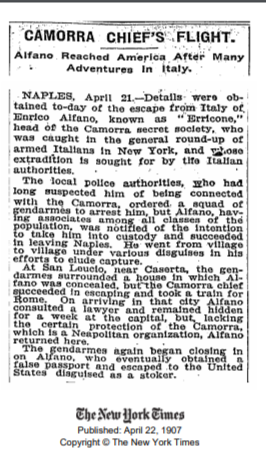 Enrico ‘Erricone’ Alfano, in America at the time of his arrest, was staying at 108 Mulberry Street, New York when the building was raided by the NYPD on April 17, 1907, led by an Italian American New York police detective. In June 1907, Alfano received a 30-year term of imprisonment. He was released in 1934.

The Italian American New York police detective worked for a clandestine department within the police was Joseph ‘Joe’ Petrosino.

4 Most Mysterious Disappearances That Are Yet To Be Solved

Taking Down The Outfit: An Interview With FBI Special Agent Elaine Smith