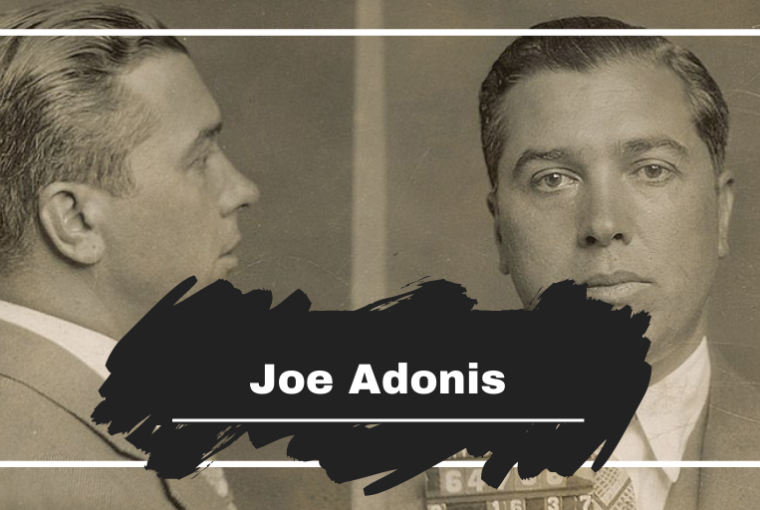 On this day in 1971 Giuseppe Doto, who was better known as Joe Adonis passed away at the age of 69 in Ancona, Italy.

In his twenties he decided to change his name to Joe Adonis, with Adonis being the Greek god of beauty and desire. It is said that the name change came from a chorus girl who nicknamed him Adonis whilst she was dating the mobster. Although, it was also known that Adonis was very vain.

In one instant Lucky Luciano saw him combing his hair in a mirror, and asked him…

“Who do you think you are, Rudolph Valentino?” to which Adonis replied back “For looks, that guy’s a bum!”

His criminal career really got started when he became friends with Lucky, but he also joined the likes of Bugsy Siegel and Meyer Lansky in the early 1920’s to form a gang that would be involved in numerous bootlegging operations. In the height of the Castellammarese War Adonis worked as enforcer for Frankie Yale, and would go on to be a fundamental part of the Masseria killing in 1931 and later in the year the Salvatore Maranzano killing.

Adonis placed many politicians and high-ranking police officers on his payroll. Adonis used his political influence to assist members of the Luciano crime family, such as Luciano and Genovese, and mob associates such as Meyer Lansky and Louis “Lepke” Buchalter, the head of Murder, Inc.

On August 6, 1953, at a hearing in Adonis’ prison, the U.S. Department of Justice ordered Adonis’ deportation to Italy. The government claimed that Adonis was an illegal alien. Adonis fought deportation, claiming that he was a native-born American citizen and three days later he would be released from prison.

3 years later Adonis voluntarily left New York City on an ocean liner for Naples. His wife and children stayed behind. Adonis may have met with Luciano in Naples, but there is no proof of it. On January 26, 1962, Luciano died of a heart attack in Naples at age 64.

Adonis attended the funeral service in Naples, bringing a huge floral wreath with the words, “So Long, Pal”.

In late November, 1971, Italian police forces transported Adonis to a small hillside shack near Ancona, Italy for interrogation. During the lengthy questioning and some abusive treatment, Adonis suffered a heart attack. Adonis was rushed to a regional hospital in Ancona, where he died several days later on November 26, 1971.

On This Day in 1897 Lucky Luciano was Born