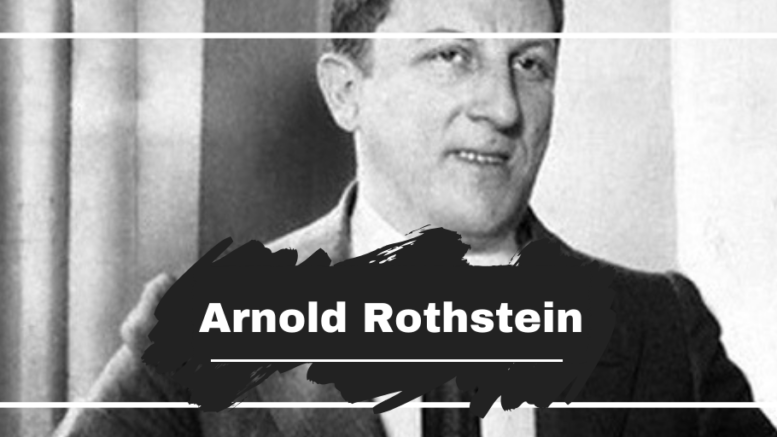 On this day in 1928 Arnold ”The Brain” Rothstein was shot and killed after he failed to pay a large debt that resulted from a poker game that was fixed by Alvin Thomas (Titanic Thompson). The debt was believed to have been around $319,000 that was owed to a number of other gamblers, which would equate to over $4 million today.

Rothstein was known to many because he taught Lucky Luciano how to dress and conduct business but his real legacy lay with the fixing of the 1919 World Series where his men paid some of the Chicago White Sox players to throw the game against the Cincinnati Reds. Obviously Rothstein had put huge amounts of money behind the Cincinnati Reds and made a substantial return for himself. The scandal was later dubbed as the Black Sox Scandal.

Unfortunately for Rothstein there was some evidence pointing towards him and his involvement in the fixing, and he was eventually brought before a grand jury. Rothstein gave the following statement in court:

“The whole thing started when (Abe) Attell and some other cheap gamblers decided to frame the Series and make a killing. The world knows I was asked in on the deal and my friends know how I turned it down flat. I don’t doubt that Attell used my name to put it over. That’s been done by smarter men than Abe. But I was not in on it, would not have gone into it under any circumstances and did not bet a cent on the Series after I found out what was under way.”

On November 4, at the age of 46, Rothstein was shot and killed during a business meeting at Manhattan’s Park Central Hotel at Seventh Avenue near 55th Street. The same place that 29 years later Albert Anastasia would be gunned down in a Barbers Shop.

On his deathbed, Rothstein refused to identify his killer, answering police inquiries with:

“You stick to your trade. I’ll stick to mine.”