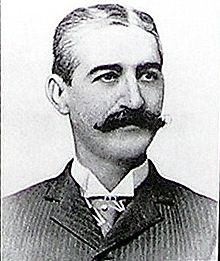 On this day in 1890 the police chief for New Orleans, David Hennessy was assassinated outside his home after returning from a meeting in town. The reason for the killing was to prevent Hennessy from giving evidence and testifying in and upcoming trial against the Provenzano gang.

Before Hennessy was killed a fruit importer by the name of Joseph Macheca who was associated with a rival gang of the Provenzano’s, the Matranga gang had made several threats towards Hennessy so he became the immediate suspect in the killing.

Around 5 mobsters ambushed Hennessy on that night and five guns were later found at the scene of this death. Although Hennessy didn’t die straight away (he spent hours in hospital), he did not or could not name the shooters, his final words the day after the shooting were:

The aftermath of the killing was probably the most talked about as 250 Italians were arrested in the City, and 50 officers became part of a new committee to investigate the killing. Later in the year 19 Italians were indicted by a Grand Jury, and the following year a trial for 9 of them too place. All 9 mobsters were found not guilty through lack of evidence, and the media soon took to the stage claiming jury and judges had been bribed.

The real aftermath and talking points came when thousands of demonstrators gathered outside the prison in outrage at the verdict. A 12-man execution squad stormed the prison and lynched 11 of the 19 mobsters including Macheca.

David Hennessy was between the age of 31 – 32 at the time of his death and left a lasting legacy.

Through Their Eyes Thursday: Lorenzo Anello