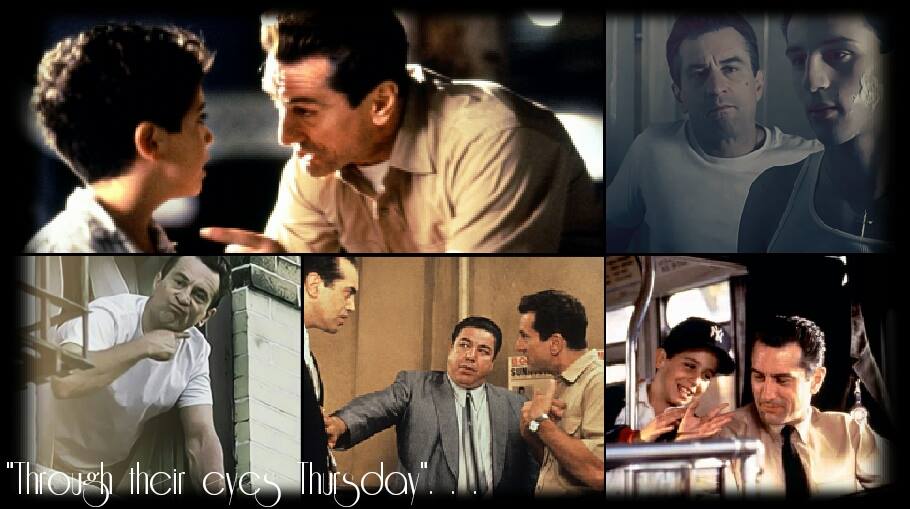 The saddest thing in life is wasted talent. I told Calogero that many times. Did he listen? Who knows, i doubt it. I’ve been grooming him since he’s a small kid out on that stoop to follow his father, live a good honest life, get a good job and a nice pension and he’ll sleep peacefully every night. Did he listen? I can’t blame the kid. It was always gonna be a struggle living here in the Bronx, with all the wiseguys and the lifestyle they lead on show for him to see day to day. But i turned up okay. It was tough growing up but i turned out good enough. Not rich and powerful like Sonny, but good enough. I put food on that table daily, steak once a week. I didn’t see it coming. No one did. He was so young, so innocent. I thought he’d be at least 16, 17 maybe before he became involved or around Sonny and his crew. But some wiseguy had to go and get emself shot to death with my kid as prime witness.

“I did a good thing right daddy?”

Never thought I would. I was a straight shooter. Law abiding. An mta bus driver most my life i knew the Bronx well. We never got rich, but we had each other. Me, Rosina and Calogero. So when Sonny offered me a side earner via jimmy whispers as a thank you for saving him, I politely declined. Then the day I found out he was working for Sonny I blew. I stood my ground with Sonny, I wasn’t afraid of him, I could hold my own, but he was saving face. The kid was tellin me he threw his baseball cards away cos Mickey Mantle wouldn’t pay my rent. Sonny loved that. I loathed it.

We knew where each other stood. Time passed, i continued to drive, Sonny became a Boss. A big man in the Bronx. I tried to tell Colagero, Sonny don’t trust nobody, did he listen? Look I’m an old fashioned guy, im not prejudiced or anything i just believe we should marry our own ye know. Stick to our own people. Old fashioned core values. Stay loyal, be good to those in your life who are cherished and important to you. My son was close to that life. But i kept him within arms reach too. I told em it doesn’t take much strength to pull a trigger but try get up every morning day after day and work for a living, That’s who the tough guys are.

You know, i never hated Sonny. Just resented him for makin my boy grow up so much quicker than me and his mother expected. But, I’m a man of the world and realise life doesn’t always go the way it’s planned. Above all i love my son. That’s all it was ever about. I never thought I’d say it but Colagero learned some invaluable street lessons from Sonny that saved him a few times. That, i am grateful for.

On This Day in 1925 Johnny Stompanato was Born

On This Day in 1890 David Hennessey was Killed Aged 32