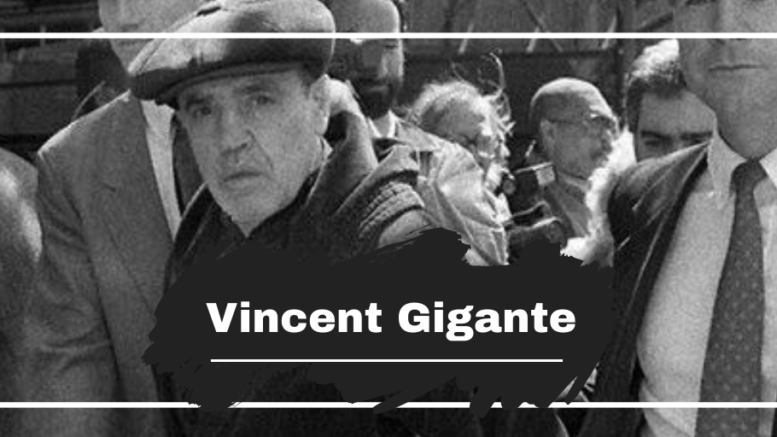 Today we mark the anniversary of the passing of Genovese mob boss Vincent Gigante who died at the age of 77 years old.

“This is for you Frank!”

Those were the words that saved the life of mob boss Frank Costello, and the words that could have ended Vincent Gigante’s mob career and his life, for botching a hit.

For many mobsters who failed a mob hit, it would have ended with their own life being taken, but not for Gigante. He would go on to become the boss of the Genovese Crime Family, but he would be known mostly for wandering the streets in a bathrobe mumbling to himself.

There’s no doubt that Vincent Gigante was one of the oddest characters in mob history.

In 1947 Gigante began his mob life as an enforcer in the Luciano Crime Family, and a protégé of future family leader, Vito Genovese and the ultra-quiet boss Philip Lombardo who retired in 1981 but supported Gigante’s takeover as boss.

Whilst John Gotti was very flamboyant, Gigante was more disciplined and kept himself distant from lower ranking mob members and other family bosses. At one point he said that anyone who mentioned his name would be killed on the spot, and ordered his men to point to their chins or make a C with their thumb and forefinger when referring to him.

However, this is not where his nickname CHIN came from, that came from his mother’s Italian pronunciation of his birth name, Vincenzo (Vin-CHEN-zo).

During the first 5 years of his time as boss of the Genovese Crime Family he also sanctioned a hit on rival crime boss, John Gotti.

In 1986 Chin planned to have Anthony Casso kill the new Gambino boss John Gotti, his underboss Frank DeCicco and Gotti’s brother Gene Gotti, due to the unsanctioned 1985 murder of Paul Castellano.

The contract was passed from Gigante to Lucchese boss Anthony Corallo.

John Gotti survived the hit as he backed out of the meeting at the last minute, but his underboss was blown up in a car bomb.

Sammy Gravano described the scene of the car bomb

“I saw Frankie laying on the ground beside the car. With the fire, it could blow up again. I tried to pull him away. I grabbed a leg, but he ain’t coming with it. The leg is off. One of his arms is off. I got my hand under him and my hand went right through his body to his stomach. There’s no ass. His ass, his balls, everything, is blown completely off”

By 1992 Anthony Salerno was sent to prison, and this was when Gigante was revealed as the head of the family.

With no one else to hide behind, Gigante resorted to a tactic that he’d used to beat earlier attempts at criminal convictions: faking insanity. Between 1969 and 1990, Gigante checked himself into a psychiatric hospital 22 times. The sight of Gigante walking through the streets of Greenwich Village dressed in a bathrobe and mumbling to himself became common.

This act worked until 1997, when Sammy Gravano testified that Gigante was sane and was the head of the Genovese family. He was convicted of numerous counts relating to racketeering and murder conspiracy and received a 12-year prison sentence.

After his 1997 conviction, Gigante faced new charges in 2003. He admitted that he had been faking his mental problems for over three decades to avoid having to stand trial. Pleading guilty to an obstruction of justice charge, Gigante received an additional three years on his original sentence but he wouldn’t live to serve them all.