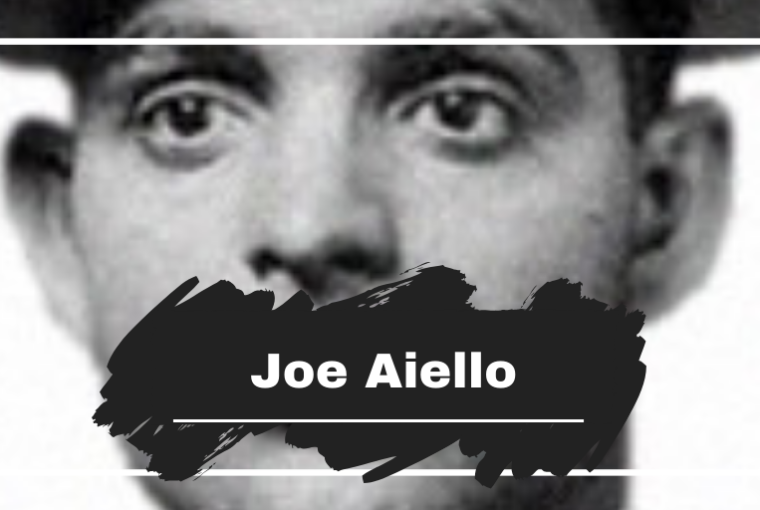 Guiseppe Aiello was born in Bagheria, Sicily, and he was one of 10 boys in his family. In July 1907, Aiello immigrated to the United States to join various members who were already there. The Aiello family set up a number of businesses in both New York and Chicago.

They became importers of groceries such as olive oil, cheeses, and sugar. Aiello was the co-owner of a cheese importing business alongside fellow Sicilian, Antonio ‘The Scourge’ Lambardo. The Aiello’s also opened a bakery and a confectionery shop. With the enactment of Prohibition and beginning of bootlegging, the sugar import business brought the family into contact with organized crime.

For many Sicilian immigrants settling in the United States, there was a Union formed to help them, it was known as Unione Siciliana, it was set up for charitable purposes, however it was soon took over and corrupted by Sicilian gang members, demanding protection money from their members and promising retribution for those that refused, Al Capone wanted a part, but he was banned from joining due to being Neapolitan not Sicilian, Mike Merlo was the head of the Unione, however his death in 1924 reignited Capone’s ambitions to control the Unione.

Tony Lombardo, a Capone ally, became the new head of the Chicago branch angering Aiello, who had also wanted this job, this was just adding fuel to the fire as Aiello was already exasperated by Lambardo due to a disagreement over the control of the cheese importing business.

Without success Aiello decided he wanted to eliminate the both of them. On numerous occasions Aiello failed to assassinate Capone, one time offering Joseph ‘Diamond Joe’ Esposito $35,000 to put prussic acid in Capone’s soup.

Instead, Esposito exposed the plot to Capone, silly of Aiello considering Diamond Joes restaurant was a regular spot Capone visited, those that were ordered to assassinate Capone were themselves ended up slain.

Police raided a number of addresses and arrested numerous Aiello associates, including Angelo La Mantia, who confessed that he had been hired by Aiello to kill Capone and Lombardo. Aiello himself was then picked up by police and taken to South Clark Street police station. Capone heard of the arrest, and dispatched a large team of gunmen to stand guard outside the station, ostensibly to await Aiello’s release. Three of Capone’s gunmen got themselves arrested near the front of the station, probably intentionally, for having been placed in the cell next door to Aiello they duly informed Joe that he was as good as dead.

Aiello took up an alliance with George ‘Bugs’ Moran, an enemy of the North Side Gang of Chicago, Two of Morans hit men were given the task of eliminating Lombard, which they did indeed succeed in doing.

Aiello still believed he had a chance to take the throne of Unione leader himself, and apparently ignoring the fact that it appeared to be a somewhat dangerous position to occupy, Aiello was due to attend a mob meeting at the Statler Hotel in Cleveland, at which the Unione Siciliana leadership would be discussed. Allegedly, Aiello elected instead to inform the police of the meeting, leading to the arrest of 23 apparent mob figures.

The murder of Lolordo was the next major event in the battle for control of the Chicago mob, and again Aiello was believed to have masterminded the killing, as with that of Lombardo, Capone had enough and organised the St Valentines Massacre in retaliation, however, the massacre did something Capone did not expect, bring himself down, the police went after Capone with everything they had got, they got him for tax evasion, and thus ending his reign as boss.

Remarkably, Aiello then finally got his chance to head up the Unione Siciliana himself. A conference in Atlantic City of numerous mob bosses saw Aiello’s promotion as the only way to restore order in Chicago, and Capone temporarily accepted this.

Aiello’s time in charge happened along with Capone serving a year in prison for carrying a concealed weapon. Aiello, ever a man to bring misery onto himself, duly saw this as an opportunity to call for Capone’s permanent retirement.

The rumours and gossip eventually got back to Capone, who was determined to finally eliminate Aiello. Several Aiello associates were wiped out during 1930, Meanwhile, Aiello was hiding out in the Chicago house of Unione Siciliana treasurer Pasquale Prestogiacomo.

“You’re dead, dear friend, you’re dead. You won’t get to the end of the street still walking” ~ Louis Campagna

On October 23, Aiello was making plans to permanently leave Chicago, allegedly to move to Mexico. Upon leaving Prestogiacomo’s building, a gunman in a second-floor window across the street started firing at Aiello with a submachine gun. Aiello toppled off the building steps and moved around the corner, out of the line of fire. Unfortunately for Aiello, he stumbled into the range of a second submachine gun nest on the third floor of another apartment block. Aiello was taken to Garfield Park Hospital, but was pronounced dead on arrival.

The coroner eventually removed 59 bullets from his body.

Aiello was originally buried in Mount Carmel Cemetery in Chicago on October 29, 1930, close to former friend Lombardo, before being placed in Riverside Cemetery in Rochester, New York, Aiello’s funeral lacked the show of many organized crime funerals of the age; the cars filled with mourners and police on motorcycles who started the trip from Aiello’s home disappeared before reaching the cemetery. Besides the hearse, all that remained of the procession was a car containing Aiello’s widow Catherine and three Ford Sedans containing flowers.

Meet The Most Fashionable Couple In New York