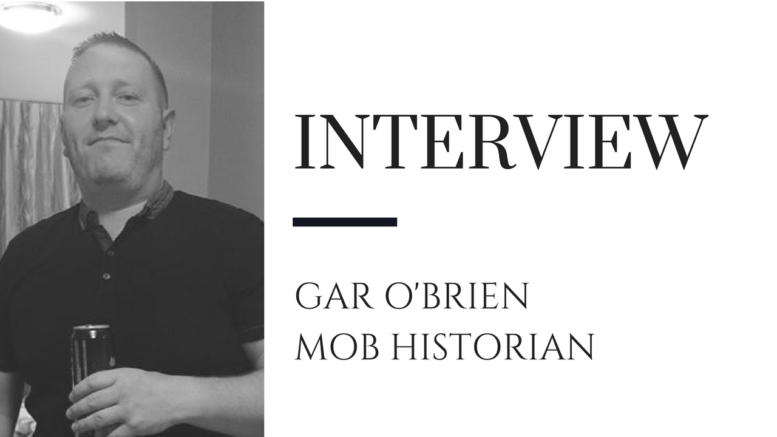 At the NCS we enjoy interviewing actors, authors, journalists, mob relatives, and former law enforcement officials. However, we also like to get into the mind of those who have a passion and interest in the mob world.

Today we sat down with Gar O’Brien, who lives in Ireland and runs a number of mob groups over on Facebook which include The Classic Gangster Society and a fairly recent group that is getting a lot of engagement, The Commission. He also runs The Godfather Family group which holds discussions about…you guessed it.

Gar also helps to run the NCS with regular contributions to the Facebook page.

We wanted to get to know a little bit more about him and where his interest in the mob all started.

The NCS: Gar, thanks for taking the time out to speak with us at the NCS. Firstly, tell us a bit about yourself and where your mob interest first started from? Was it a film, a book, or hearing about one of the many mobsters that provoked your passion in the subject?

Gar: Hi Craig & thanks for taking the time to listen to my story. My interest was sparked when iI was maybe around 13 or 14 as a young Amateur Boxer I used to read a lot on the greats of the Ring. The Mob way of life entered my sphere of consciousness when I read Raging Bull the Jake LaMotta autobiography. This excellent book showed me the side to Boxing I didn’t know at my young age. So powerful were the Mob back then that they controlled the world of Boxing(Through the IBC) to a certain extent that The Bronx Bull was able to receive a title shot with the nod of a head or a fall to the canvas in this case. Such power I thought. It led me on a path of finding information about this Secret Society so powerful they can control World Champions. Goodfellas was the movie I first watched and I was hooked ever since. The Suits, the Cars, the lifestyle, the Women, money, Power etc etc.. Then the books were next. Anything I could read on the subject. The NCS: Where did the idea to create the Facebook groups come from? Was this a fairly new idea or had you wanted to do something like this for a while?

Gar: I use Facebook for my interests and news mainly. So I wanted to see pictures and posts relating to those interests. As a huge Godfather fan the Original Godfather page didn’t post too often, so I said I’ll make one myself and started the page The Godfather, Don Vito Corleone. With the help of a share or two it took off nicely and people seem to enjoy it. My fondness for Classic Gangster pics got me to start my other page Classic Gangster Society, it’s what I wanted to see on my news feed so it started there. A friend of mine had a nice page, Classic Boxing Society so I thought that was a classy name and used that name for my new page.

The NCS: Do you have a particular mobster that interests you more than others?

Gar: No. I tend to sway towards a few of a certain quality. Fictional, Don Vito Corleone. Real life. Joe Bonanno and Carlo Gambino, simply for their Old school Sicilian tradition in keeping the Secret Society as low key as possible. And abiding by traditions and rules, to a certain extent of course I mean they weren’t perfect either.

The NCS:  If you had to recommend one book to anyone, which book would it be and why?

Gar: Mafia Dynasty was a favourite of mine from what I have read, for its detail and the information that the book provides. The NCS: One of the main questions we ask people is what era would you like to travel back to an experience when it comes to Mafia history, and why?

Gar: I’d say the 20’s. Prohibition, bootlegging, the roaring 20’s, life seemed simpler then, and narcotics weren’t a problem to Families as they became not too long after.

The NCS: If you were to have a sit down with any mobster from any time period, who would you choose and what would you ask them?

Gar: I’d have to say Don Carlo. I’d ask him when he stepped off that boat in 1921 did he ever envision he’d become such a Powerful Boss and when he actually believed he could become the Boss. Also how was he so calm!

The NCS: Have you ever had the opportunity to visit any historic places from the history of the mob? If not, what would your hit list be?

Gar: Yes while honeymooning in NYC in 2010 we visited the site Sparks Steakhouse where Castellano and Bilotti were taken out. Also we did The Sopranos tour in NJ which was excellent for fans. The NCS: It’s fair to say that the groups you have created have really taken off in terms of engagement from fans and of course some of the names that have joined them, such as Phil Genovese and Meyer Lansky. Where do you see this all going in the future or is it something you haven’t really thought about too much at present?

Gar: It’s just a hobby, an interest. I’ll keep them going as a fan, my main priority is My Family at home which consists of My Underboss  and our two Caporegimes, who will some day take over The Family. (joking)

The NCS: As you know we do a lot of videos, quizzes and infographics on the site, what would you like to see for the future from the NCS? Is there anything that you would like to know more about or get added to the site?

Gar: The NCS is a fantastic site and page, it’s probably the best out there. The information is excellent and the videos I always watch. So I cant say it needs anything added to it.

The NCS: Thanks for taking time out to join us Gar, and we hope you enjoy our future posts.

Gar: Thanks for the offer and congrats on the wonderful job you do in keeping us Mob fans occupied and all the best in the future.