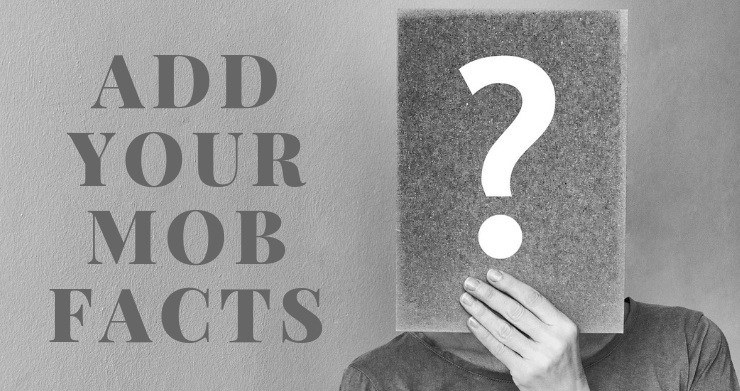 Inspired by our very own admin, David Breakspear, we thought we would create a page where you can all add your own mob facts. They can be about specific mobsters, events or meetings, era’s of the mob, or anything else that is loosely connected to the Mafia.

Just enter your name below (so we can credit you), and then leave your fact in the post box and submit it to us for review.

The famous scars on the great Al Capone’s face came from an incident at the Harvard inn, ran by Frankie Yale. Frank Galluccio came in with his sister, and Al who was a bouncer/bartender said to the young girl “Honey you got a nice ass and I mean that as a compliment”. Frank was outraged and sliced him 3 times on his face, giving him an embarrassment he attempted to hide his entire life.. That part of the story, most people know, but when it came time to decide on what to do with young Al for his actions, it was Salvatore Lucania a.k.a Charlie “Lucky” Luciano That made the call, that al was not allowed to strike back in anyway towards frank.

Sent in to us by: Aaron “Lucky” Batteau

Bessie Starkman was the only Jewish woman to command members of the Italian mob and was the brains behind her lover Rocco Perri’s bootlegging business.

Sent in to us by: Juliet Smith

They told me, whenever people talk about the mafia this I what you tell them: “The mafia does not exist. It’s just an invention of the press to sell more papers.”

Sent in to us by: Erik de Groot

Sent in to us by: David Breakspear

Was Lucky Luciano a Rat For Cooperating With The Government?