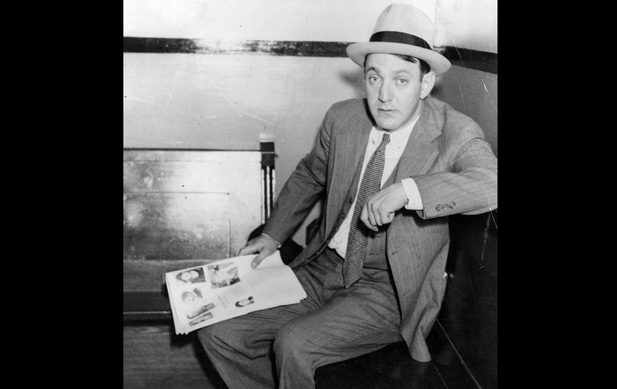 On this day in 1901 a German Jewish-American mobster by the name of Arthur Simon Flegenheimer was born in New York City. Know to many as Dutch Schultz, he operated throughout the Prohibtion era making his money from bootlegging and the numbers racket.

Dutch had a violent temper and in one particular incident in a restuarant, he pulled a gun from his vest and stuck it into the mouth of another gangster before blowing him away.

Mobster Dixie Davis later went on to tell the story:

“Dutch Schultz was ugly; he had been drinking and suddenly he had his gun out. Schultz wore his pistol under his vest, tucked inside his pants, right against his belly. One jerk at his vest and he had it in his hand. All in the same quick motion he swung it up, stuck it in Jules Martin’s mouth and pulled the trigger. It was as simple and undramatic as that—just one quick motion of the hand. Dutch Schultz did that murder just as casually as if he were picking his teeth.”

Schultz apologized to Davis for killing someone in front of him. When Davis later read a newspaper story about Martin’s murder, he was shocked to find out that the body was found on a snow bank with a dozen stab wounds to the chest.

When Davis asked Schultz about this, the boss dead-panned,

At the age of 34 the mobster’s life would meet a dramatic end.

In 1935 After Schultz disobeyed the Commission and attempted to carry out the hit on Thomas Dewey, himself, they ordered his murder. 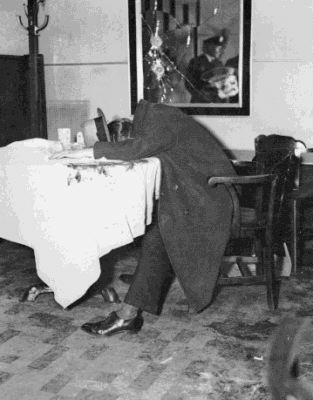 He was shot once, below the heart in the bathroom of the Palace Chophouse restaurant but staggered out and sat at a table (not wanting to die in the bathroom). The hit was carried out by Murder Inc members (Charles Workman and Mendy Weiss, acting on orders from Lepke Buchalter).

Find out more about the hit on Dutch Schultz

On This Day in 1925 Anthony Gaggi was Born