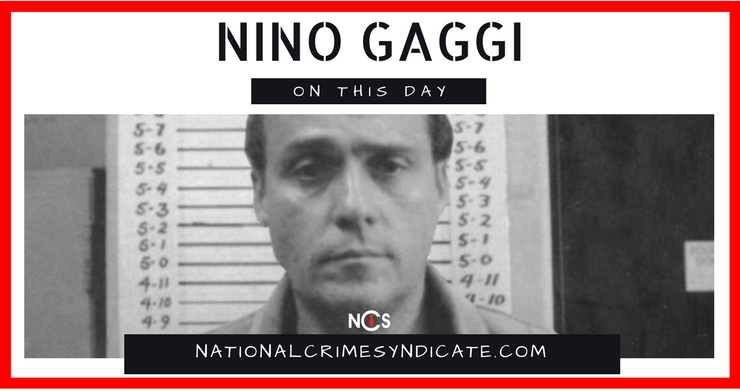 On this day in 1925 the future capo of the Gambino Crime Family was born, Nino Gaggi made his fortune through loansharking operations as well as being a silent partner in many businesses in the New York area.

In 1960 Gaggi made his bones in the mob when he served on a hit-team that was contracted to take out mobster Vincent Squillante (who was allegedly the mobster who killed Frank Scalise in 1957).

According to Dominick Montiglio (Gaggi’s Nephew and FBI informant), Gaggi described the murder:

The hit team had hauled the body to the basement of a building, loaded it into a trash incinerator, and then cremated it. As the body was never found, nobody came to trial for the murder.

Gaggi was also the man who supervised Roy DeMeo and the famous DeMeo crew during the 70’s and 80’s. It was in the late 1970’s, Gambino captain James Eppolito told Paul Castellano that Gaggi and DeMeo were drug trafficking. Eppolito claimed that DeMeo had cheated Eppolito’s son, in a drug deal and that he was also working for the FBI.

While being held at the Correctional Center for trial, Gaggi died of a heart attack on April 17, 1988.

On This Day in 1901 Dutch Schultz was Born

On This Day in 1922 Umberto Valenti was Killed Aged 31