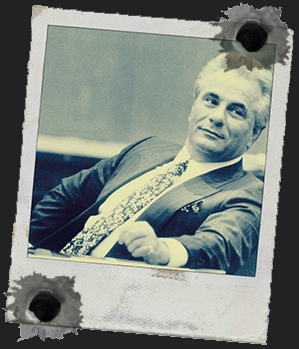 Cause of Death: Throat Cancer

John Gotti was born on October 27th, 1940 and was also known as The Teflon Don due to the fact that any charge made against him wouldn’t stick more often than not.

Gotti was a mobster who eventually worked his way up the crime ladder to became the Boss of the Gambino Crime Family but to begin with became involved in small street gangs who were associated with the Mafia.

Being born into poverty he and his other 4 brothers all turned to crime, they would all end up becoming made men in the Gambino Crime Family. By the age of 14 he was well known in his street gang and was quickly becoming a force to be reckoned with. If you wonder where he got his limp from then during this era of his life he attempted to steal a concrete mixer which fell on his toes crushing them.

By 16, Gotti had dropped out of High School, ready for his life of crime.

Starting Out As An Associate

Gotti would end up becoming close friends with Gambino underboss which would help move him up the ranks in the Gambino Crime Family. Gotti and Dellacroce shared similar interests and would hang out at the Ravenite Social Club where mob activities would be discussed.

This was a point in Gotti’s life in which he showed that he was an enforcer and a man not to be messed with, although he wasn’t a made-man yet. In 1957 the mob closed the membership books and they weren’t to be opened again for some time.

In 1973 Carlo Gambino’s nephew, Emanuel was murdered and Gotti was assigned as part of the hit team that were going to take out the main suspect who was an Irish-American mobster called James McBratney. Two other men in the hit squad was Ralph Galione and Ruggiero, but the hit went wrong, as they were meant to kidnap McBratney however the event ended with Galione shooting and killing McBratney.

Due to a rat being on the inside Gotti was arrested for the murder in the mid 70’s, but with the help of his attorney he managed to reduce the sentence to a manslaughter charge which resulted in a four year sentence.

Gotti was also identified by Joseph Massino as the killer of Vito Borelli, an associate killed in 1975 for insulting Gambino mob boss Paul Castellano.

However, the four-year sentence didn’t stick as Gotti managed to come out of prison just 2 years later, and walked straight back into the Gambino family, this time he would work as Captain under new crime boss Paul Castellano with Dellacroce still acting as the underboss.

During this time, Gotti was the biggest earner for Dellacroce, and he even ran his own loan-sharking business as well as holding down a fake job of a plumbing supply salesman.

During the early part of the 1980’s, Gotti lost his youngest son Frank at the young age of 12 after he was killed accidentally by John Favara, a neighbour of the Gotti’s in minibike accident. Although the courts ruled the misfortune as an accident, Favara had just killed the son of one of the most feared men in the Mafia and eventually he disappeared, feared dead.

The Gotti’s had the perfect alibi however, at the time of the murder the family were on vacation in Florida. Many believe that John Gotti planned the killing, which was later considered a high possibility in a TV interview with Gotti’s other son, John Gotti Jr (who also joined the mob as an associate).

Gotti became very angry that the likes of Paul Castellano was running the show as boss of the family, and he argued the fact that Castellano was nothing more than a businessman and hadn’t paid his dues on the streets. Add to that the greed and isolation that Castellano put himself under and it all built up to a nasty finale.

In 1984, Paul Castellano was arrested and indicted in a RICO case, and not more than a year later, a second indictment came his way for his role in the The Commission. It was at this point that Castellano was facing a lengthy prison sentence, and already at the age of 70 it would have seen him spending his last years locked down.

As a result, John Gotti was promoted to acting boss alongside Thomas Bilotti (Castellano’s favorite Capo). However, by now Gotti had already started talks with Sammy Gravano, and other unsettled family mobsters to take out Castellano. The group of five called themselves The Fist and had the full backing of other bosses-in-waiting from as well as Joseph N Gallo, who at the time was the consigliere.

During the month of December in 1985 the strain between Castellano and Gotti was obvious, as Castellano drew out plans for the new administration of the family. Castellano would make Thomas Gambino acting boss whilst appointing Thomas Bilotti as the underboss, in an effort to drive John Gotti down and break up his crew.

This was pretty much the last straw for Gotti, as well as the fact that his friend and mob colleague Dellacroce had passed away earlier that month, and Paul Castellano refused to attend his wake.

It was time for Gotti to order a hit on his boss.

The place was Sparks Steak House and the date was a cold night on December 16th 1985. Before Paul Castellano and new underboss Thomas Bilotti had the chance to attend the steak house they were gunned down outside in a drive-by-shooting.

The family then decided to run internal investigations into how this hit happened, but most knew that Gotti was behind the hit.

After a meeting in January, the following year, Gotti was appointed Gambino crime boss.

The murder of Castellano didn’t go down that well with many other family bosses however, and in 1986 Frank DeCicco, who was one of the gunmen in the Castellano assassination was murdered himself when his car was bombed after he visited James Failla who was close to Castellano.

This order is said to have been instructed by Vincent “Chin” Gigante and Anthony Corallo, and was acted on by Victor Amuso and Anthony Casso.

However, the idea was to kill John Gotti but he cancelled visiting Failla that day and instead another capo rode with DeCicco in the car. but was mistaken for Gotti.

In January 1988, Gotti decided that he would hold weekly meetings with his capos at the Ravenite Club. This was a big risk move that could easily be recorded by law enforcement officers, and a move that underboss Gravano shunned. During these weekly meetings, FBI Gambino Squad officers would be able to survey, record and identify most of the top tier Gambino family members, as well as bugging the club itself to listen on conversations.

In the same year John Gotti Jr was initiated into the Gambino family and was quickly promoted to capo in a ceremony that was held by mobster underboss turned rat, Sammy Gravano.

Gotti’s son John Gotti Jr. was initiated into the Gambino family on Christmas Eve 1988.[93] According to fellow mobster Michael DiLeonardo, initiated in the same night, Gravano held the ceremony to keep Gotti from being accused of nepotism.[93] John Jr. was promptly promoted to capo.[28]

Convictions and Relationship with Gravano

During the early part of the 1990’s the relationship with Sammy Gravano had become strained. The FBI had managed to record conversations that Gotti had been involved in and Gotti, Gravano and Frank Locascio outside the Ravenite club.

Gotti had been accused of many things in the past but managed, in one way or another, to avoid charges. This time however the FBI pinned racketeering, with five murders (Castellano and Bilotti, Robert DiBernardo, Liborio Milito and Louis Dibono), tax evasion, bribery, illegal gambling, obstruction of justice and conspiracy to murder, on him.

The evidence was all on tape, and it was these tapes that rattled the relationship between Gravano and Gotti, and at this point Gravano knew that Gotti would sell him in if he could.

Gotti described the new underboss as too greedy and attempted to frame Gravano as the main force behind the murders of DiBernardo, Milito and Dibono.

Knowing that Gotti was about to pin everything on him, and Gravano’s new vision of what the mob was, he decided to turn rat and testify against Gotti.

Just like the Joe Valachi trial of years before, Gravano gave away all the mob secrets and confirmed how the Gambino family was structured. Coming from an underboss (second highest ranking member of a family) a lot of secrets were exposed.

On April 2nd, 1992, after 14 hours of deliberation the jury found Gotti guilty on all charges of the indictment.

“The Teflon is gone. The don is covered with Velcro, and all the charges stuck.”

During his prison life he spent most of it locked up in solitary confinement and allowed out of his cell one hour each day. Still, that didn’t stop him from getting into trouble.

While in prison, he was badly beaten up by a black inmate by the name of Walter Johnson. Gotti offered a reported $40,000 to the Aryan Brotherhood to take out Johnson, to which they accepted.

Due to the fact Johnson had attacked Gotti, the prison staff knew that his life would be in danger at that prison so they decided to transfer him.

In the early part of 2000 Gotti was battling with throat cancer and his condition rapidly declined during 2002, and ultimately he came to the end of his life in June that year.

John Gotti’s body was interred in a crypt next to his son Frank Gotti who died at the age of 12.