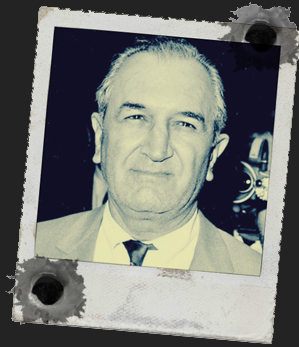 Joe Bonanno was born on January 18th 1905 in Castellammare del Golfo, which was a small town in Sicily where Salvatore Maranzano and Joe Masseria were also born.

Like many inhabitants of Sicily during the early 1900’s, Bonanno and his family moved to the United States, but only spent 10 years in Brooklyn before returning back to their homeland. However Bonanno managed to sneak back into the country by 1924 and into the peak of the Prohibition era and joined up with the Maranzano outfit.

Not many people know this but Bonanno, to his closest allies was nicknamed “Don Peppino”, however the media nicknamed him “Joe Bananas” which angered him. So essentially you were safer to call him Don Peppino.

Apparently, whilst he was in Italy, Bonanno had already been introduced to a life of organized crime and worked for the Italian Mafia.

After a few years of working under Maranzano the Castellammarese War has broken out between Joe The Boss and Maranzano, in what would become a struggle of power on who controlled certain parts of the city and what rackets were being run.

Bonanno was currently Maranzano’s underboss, and three other notable figures in the Maranzano camp were Tommy Lucchese, Stefano Magaddino and Joseph Magliocco.

After years of constant battles the war came to an end when Lucky and Genovese planned to reorganize the mob by taking out the two old bosses, and bringing a new, business-like era to the Mafia.

At the young age of 26, and after the Castellammarese War had passed, Bonanno took control of what once was Maranzano’s Crime Family. At this young age he was in fact the youngest ever mob boss.

Now The Commission was born, which acted as a council where family bosses would meet to discuss mob affairs, settle arguments and vote on decisions that needed to be made. Bonanno would hold a seat and the casting of one vote on The Commission due to his new role of crime boss. The Maranzano Crime Family would then become the Bonanno Crime Family.

The new Bonanno crime family was one of the smaller families operating in New York at the time, and Joe appointed two underbosses who were Frank Garofalo and John Bonventre.

In terms of income and what the family dabbled in, their rackets extended from loan sharking, bookmaking, numbers running, prostitution, and other minor activities to keep the money rolling in. Bear in mind that during this phase, Bonanno was pretty much an illegal immigrant has he crept back into the country in 1924. Therefore, in 1938 he decided to once again leave the US and the re-enter legally so that he could apply for citizenship, this was granted some time later in 1945 by which time he was a multi-millionaire.

Despite being rich he didn’t really show it, he acted more like Carlo Gambino rather than John Gotti, the only expensive things he had were his cigars which enjoyed smoking. He also managed to duck under the law’s radar and wasn’t arrested, or jailed during his early days (again, most other mobsters of his time were in and out of prison).

However, the day did catch up with him eventually but not through any fault of his own. The Apalachin meeting of 1957 was a disaster and was the first time that the mob became part of the national newspapers. The meeting was setup by Vito Genovese and police noticed that very expensive cars were coming through the quiet town, all going to the same house. The police ended up raiding the building and making several high profile arrests, Joe Bonanno was one of the lucky ones to avoid being arrested but it did draw the attention of the FBI.

Joe Profaci and Bonanno were good friends, and after his death, the Profaci Crime Family was handed over to Joe Magliocco. Magliocco didn’t have the easiest time of it as mob boss and came under pressure from Joe Gallo and his brothers who were backed by Tommy Lucchese and Carlo Gambino.

Magliocco and Bonanno had a meeting in which they discussed a hit on both Lucchese and Gambino, the contract was given to Joe Colombo who worked for Magliocco at the time before he went on to create the Colombo Crime Family in later years.

However, Colombo didn’t complete the hit, instead he went straight to Gambino and told him and Lucchese that Magliocco had ordered the hit. Quickly, a Commission meeting was held and it didn’t take a rocket scientist to know that Magliocco wasn’t acting alone, they soon identified Bonanno as the main man behind the order.

The Commission then asked the two culprits to appear for questioning, Bonanno didn’t show. Magliocco did show and was let off really, he only had to pay a $43,000 fine, and to hand over the family to Joe Colombo. This decision was probably because Magliocco was seriously ill at the time, and he ended up dying soon after.

Bonanno has completely disappeared into hiding, and because of this other mob bosses were losing their patience with him. Eventually after months with no response, they decided to hand over the family to a capo called Gaspar DiGregorio. Not happy with this Bonanno’s son created a split within the family and the family ended up becoming two families, the media dubbed this as “The Banana Split”.

Bonanno Returns To The Scene

After two years of lying low, Bonanno ended up returning to New York and claimed that he was kidnapped by Buffalo Crime Family members Peter Magaddino and Antonino Magaddino but this information seems largely to be made up due to several factors.

The kidnapping apparently occurred outside his lawyers apartment, but would a guy like Bonanno really be walking the street unguarded? Especially, at a time where he was wanted by The Commission for questioning in regards to the planned hit.

Upon his return to New York he was facing pressure not just from his family but also from the law, as the US Attorney at the time served him a subpoena to testify about organized crime before a jury. If he testified he would be breaking the code of Omertà, which resulted in death by the mob, or upon refusal he would be jailed. Bonanno decided to not show up and was indicted for contempt of court to which he challenged for 5 years until the case was dropped.

Despite a split in the family no violence was reported, or wars between the two families until 1966 when the two sides met at a meeting ,and DiGregorio planned to get his men to kill the Bonanno contingent which consisted of Bonanno’s son, Bill Bonanno. This failed however, no one was killed and in the end, The Commission had to step in to settle the war by replacing DiGregorio as the mob boss and promoting Paul Sciacca. Again though, this didn’t work, and it actually took news of a Joe Bonanno heart-attack in 1968 to draw a close to war, with him stepping down as family boss.

The family then merged back to one family, with Sciacca as the main boss.

In April 1983 Joe Bonanno and his son Bill appeared on a CBS News TV program called 60 Minutes to be interviewed by correspondent Mike Wallace. In this interview Joe retold his parts of his life as a mob boss.

A brave move also came in 1983 when he decided to write a book called “A Man of Honor” whuch was an autobiography of his life. I imagine that many police departments bought this book to see if they could get any more information on mob activities and for Joe to explain more about how The Commission worked.

Joe didn’t actually break the code of Omertà as he didn’t give away any secrets and refused to answer any questions to the government or police, but by releasing such a book the current mob bosses felt that he had betrayed the Mafia.

In a spin or irony Joe Massino who was the Bonanno Crime boss in 1983 was so taken back by this that he took it upon himself to rename the family to the Massino Crime Family, except this was never really used as he ended up as a government informant not long after.

Bonanno died of heart failure at the impressive age of 97, in 2002. He had an illustrious career that spanned many decades and was the last Mustache Pete.