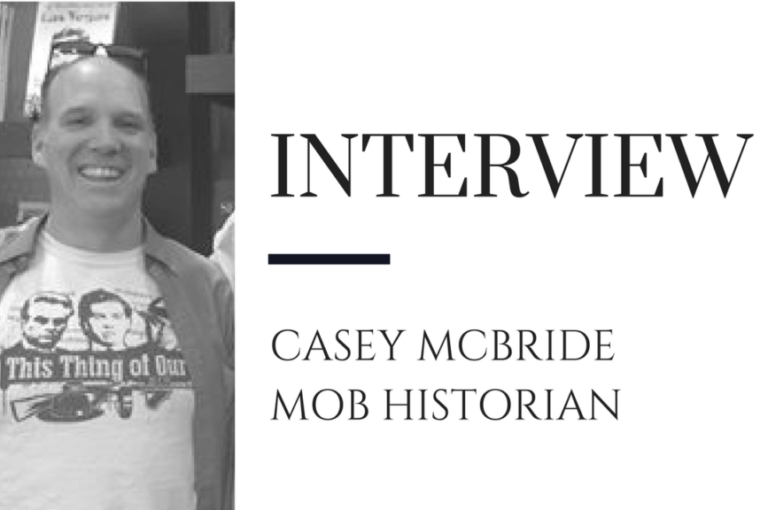 Joining us today is a familiar face, and someone you will have seen on the NCS blog and Facebook channel. He is now the owner of Uncle Frank’s Place, sharing his wealth of knowledge on all things Frank Costello. He is of course Casey McBride.

We wanted to learn a bit more about how Casey became interested in Frank Costello and where it all started for him.

Casey, thank you for taking the time out to talk with us.

The NCS: So Casey, where did your interest in the mob first span from and how long has the mob been a part of your life?

Casey McBride: It’s my pleasure guys. I have always been intrigued by mobsters in film, like Leo from Miller’s Crossing, and Sydney in Hard Eight, but about 5 years ago I began watching reruns of the Sopranos and became a bit more interested in the workings of the mob. After I finished the series I accidentally came across the episode of the documentary Mobsters, the one on Tommy Lucchese, and I found it fascinating. The corruption of the unions, the fixing of fights, all of it. The next day I picked up the book, The Five Families, and that was it. Once I start reading about something, it’s all over.

The NCS: Frank Costello seems to be your most inspirational character from the history of the mob, where did the fascination come from and can you remember the first story you had read about him?

Casey McBride: The first time I became aware of Costello was in the Lucchese documentary. They were showing the Kefauver Hearings and in walked Frank. I looked up his episode of Mobsters and I was blown away. I’m much more interested in savvy and not so much psycho. I love the back room deals, the walk and talks, and the strategies. Frank was the ultimate Machiavellian. The puppet strings on the Godfather logo, that’s Frank. He was a very different type of mobster.

The NCS: Have you ever had the pleasure of visiting any places from mob history on your travels?

Casey McBride: I have been to New York City twice. Both times as a chaperone for a gaggle of high school students. I only had a few hours of free time but I made the most of it. I saw Sparks, Petrosino Square, the Waldorf, the Park Sheraton, Columbus Circle, and tried to get into the Majestic. I wanted to see Costello’s mausoleum but figured it was too far away in Queens. We were staying at the Laguardia hotel and decided to look it up. Turns out, St Michael’s Cemetery was right down the street so I got to see it. Aside from the damage on the doors from Galante, his tomb has not been desecrated like so many others. So I got to pay my respects.

I would love to see the Mob Museum. I regret not going when Sandra Lansky spoke there. Christian Cipollini may be speaking there and if so, I intend to make the trip.

The NCS: You have recently started the group page, Uncle Frank’s Place, on Facebook. In the last month alone you have attracted some high profile followers, so what are your aims or plans for this page moving forward?

Casey McBride: Good question. To be honest, I’m a bit surprised by this interview. The NCS posted you were looking for writers, and I was teetering on whether or not to even try submitting something. The Social Club kicked off around the first of the year and now this. Thanks to you guys and some other great pages who have been supportive, I’m doing this interview. For now the plan is keep on doing what I’ve been doing.

The NCS: As a fountain of knowledge on Frank Costello, what is would you say is your favorite fact about the Prime Minister of the Underworld?

Casey McBride: I think that he was a reluctant boss. Maybe one of the only bosses who probably didn’t want the job in the first place. I think that is what made him one of the great ones. He was doing really well on his own and would have been happier without all of the things that come with being a boss; like getting shot in the head.

The NCS: Have you ever thought about writing a book on Frank Costello?

Casey McBride: All the time. I intend to do it.

The NCS: Let’s say you had the chance to go back in time and ask him one question, what would that be and why?

Casey McBride: I wouldn’t ask a question, I would go back to when he was a young man and give him the Morgan Freeman, Shawshank speech about being a dumb, punk kid. He didn’t know his potential, maybe he would have made other choices if he did. Guys like Frank and Lansky could have been anything they wanted. I would probably just end up getting clocked on the head and losing my wallet though.

Casey McBride: 40’s-50’s New York would be the time and place for me, no question. Not just because Frank was boss then, but also the live music scene was off the chart.

The NCS: If you had the chance to sit face to face with a mobster from the past (other than Frank), and ask them questions, which one would you choose to talk with, and why?

Casey McBride: Mobster would be Torrio or Lansky, but if I could choose anyone from the mob world besides Costello it would be Joe Petrosino. To me, Petrosino was about the coolest man to ever walk the planet.

The NCS: Casey, we wish you all the best of luck with your page and hope you continue to be a fundamental part of the NCS.

Casey McBride: Thank you guys so much for having me. I look forward to contributing more to the Social Club.

Win a Lucky Luciano T-Shirt with The NCS