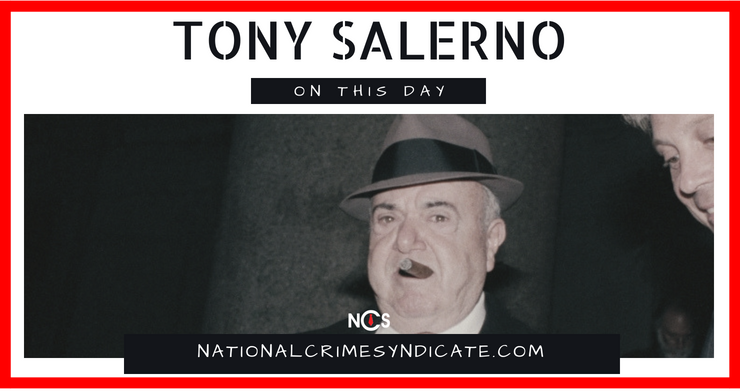 25 years ago today the Genovese mobster Tony Salerno passed away at the grand age of 80 years old, at a medical center for prisoners in Missouri.

Tony Salerno made a name for himself in the 1960’s, when he controlled the largest numbers racket operation in New York, grossing up to $50 million per year. Whilst many mobsters moved out of Harlem during a period where Latino and African-American’s began to dominate the neighborhoods, Salerno still remained there. His headquarters was the Palma Boys Social Club.

During the late 1970’s he was sentence to 6 months in prison for gambling and tax evasion charges, and it was around this time that we glimpsed the first signs of health problems which culminated in a 1981 stroke which put him out of action for some time, as he took to his Rhinebeck estate to recuperate. In early 1981 we also saw the death of the current front boss Frank Tieri, which saw a position open up for Salerno who was currently the Genovese Underboss.

Most law enforcement officials believed that Frank Tieri and Tony Salerno were the ultimate bosses of the family, so when Tony Salerno took over from Tieri, they believed that he was now the defacto leader of the Genovese Crime Family.

However, it was an open secret in New York Mafia circles that Salerno was merely a front man for the real boss, Vincent “the Chin” Gigante. This fact would later be uncovered by turncoats and FBI informants who would confirm that Gigante was the supreme boss. This was a tactic that was also used by Philip “Benny Squint” Lombardo who took over the reigns of the family after the death of Vito Genovese on 14th February 1969.

The purpose behind this was simple.

It was to provide a cushion, some insulation between the actual boss of the family and from any law enforcement heat.

When Lombardo went into retirement and Vincent Gigante took over the family in 1981, Salerno was reduced to a solider within the Genovese Family ranks. Over time though, he would work his way back up the ladder and become a prominent part of Gigante’s plans.

It was only a matter of years, 4 to be precise, until Tony Salerno and 8 other New York bosses on the Commission were indicted in the Mafia Commission Trial. In October 1986, Fortune Magazine named Salerno as America’s top gangster in power, wealth and influence. For that reason, he was nominally the lead defendant in the trial. Later that year Tony Salerno was convicted on RICO charges and a few months after that in January 1987 he was finally sentenced, along with 6 other defendants (Paul Castellano, who was one of the other defendants was killed in December 1985), to 100 years in prison.

In 1986, after Salerno’s conviction in the Commission Trial, his longtime right-hand man, Vincent “The Fish” Cafaro, told the FBI that Salerno was only a front for Gigante.

However, investigators had missed several clues that Salerno wasn’t the real boss before then. Most tellingly, an FBI bug captured a conversation in which Salerno and capo Matthew “Matty the Horse” Ianniello were reviewing a list of prospective candidates to be made in another family.

Frustrated that the nicknames of the wannabes hadn’t been included, Salerno shrugged and said,

“I’ll leave this up to the boss”

A clear sign that he was not the real leader of the family.

In the 2011 gangster movie Kill the Irishman, Salerno was portrayed by Paul Sorvino.
The film depicts Salerno’s role in the gangland war between the Cleveland crime family and Irish mob boss Danny Greene.