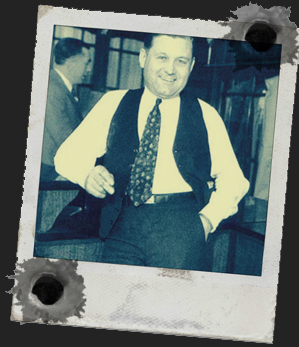 Cause of Death: Lung Cancer

George Clarence Moran, or Bugs as he is better known was a mobster from the early 20th century, and part of the famous North Side Gang, along with Dean O’Banion.

Many say that the “Drive-By Shooting” was something that Bugs Moran made popular, a form of assassination that was a major part of the mob. He started life off as a criminal and was affiliated with a number of gangs during his early years, and was arrested three times before he even turned 21.

Why The North Side and South Side Clashed

During Prohibition both gangs ran alcohol rackets, or bootlegging, similar to the Yakuza and the operations they controlled and were involved in, across the water in Japan. The war between the North and South side came when Dean O’Banion decided to hijack alcohol trucks that belonged to the South side as they were encroaching on the North Side territory, and selling them right under O’Banion’s nose for a better price.

Torrio wasn’t a violent man, and tried to keep the peace between the two sides for many years, however this move by O’Banion would spark anger in Al Capone, and would eventually lead to the assassination of O’Banion.

A few issues arose, the first was that while Torrio was on vacation he promoted Al Capone as the stand in leader of the Outfit. Something that Capone would relish. During the stand in period Capone and O’Banion’s relationship sunk deeper and deeper to the extent that O’Banion set Torrio up in a police raid.

This was the final straw that saw a vote passed for the murder of O’Banion.

The assassination came at a flower shop owned by O’Banion, and he thought he was collecting a delivery of flowers so he wasn’t suspicious in anyway. Then, at close range, Frankie Yale, John Scalise and Albert Anselmi fired off rounds into O’Banion killing him instantly.

This is where Bugs Moran takes center stage, as he planned to have revenge on the murder of his North Side Gang leader.

The bitterness between Bugs and Capone was obvious to anyone, he would call Capone a low-life and despised his involvement in the prostitution rackets. The hatred was so intense that it would cost them their friends, and Capone his freedom.

Bugs attempted to kill Capone on two separate occasions, which would lead Capone to getting himself an armoured plated car that would later be used by the President himself.

It’s with no doubt that Bugs Moran would go all out to get back at Capone, and wouldn’t stop until he was dead. The first attempt was a drive-by shooting which left Capone unhurt but very much startled, the second attempt Bugs Moran decided that he would try and take out his bodyguards, so he targeted his main bodyguard who he then proceeded to torture before executing him on the spot. The third attempt was another drive-by shooting which was lead by Bugs Moran, while Capone and another of his bodyguards were drinking in the lobby of a hotel. Bugs Moran and his crew fired a fleet of bullets into the windows, and again Capone escaped unharmed.

It was enough to actually make Capone call a truce, but it didn’t last long.

The two were constantly at each other’s throats, one man would do something and the other would retaliate. Capone lost a lot of friends and gang members due to hits ordered by Moran, and it has to be said that Moran clearly had the better of Capone. He literally drove him crazy.

Moran went after everything that Capone loved, he burnt down Capone’s nightclubs, hijacked his liquor supplies and continued murdering anyone that came close to him.

Capone decided that in order to end this turf war he would need to pull out all the stops, so he planned the best way to get back at Moran, by taking him out as well as several of his crew. A hit that would be executed with precision.

Moran was lucky, as he saw police car pulled up outside the warehouse so he decided to flee the scene rather than entering the warehouse. However, Capone thought he had bagged himself Moran as one of his lookouts mistook Moran for another gang member.

The St Valentine’s Day Massacre changed a lot of things from a law enforcement perspective, and Al Capone would eventually bow under the pressure of the law and succumbed to tax evasion. The first Public Enemies list also went public during the 1930’s with Capone topping the pile.

As for Moran, he left Chicago some years later after Prohibition ended and the need for bootlegging alcohol dried up. He would later be arrested in 1946 for a bank robbery in which he was sent to jail for 10 years, followed by another 10 year stretch after coming out of jail from the first offence and robbing another bank.

Bugs Moran wouldn’t get to serve the full 10 years of his last sentencing however, as he died from lung cancer just a few months into the sentence.