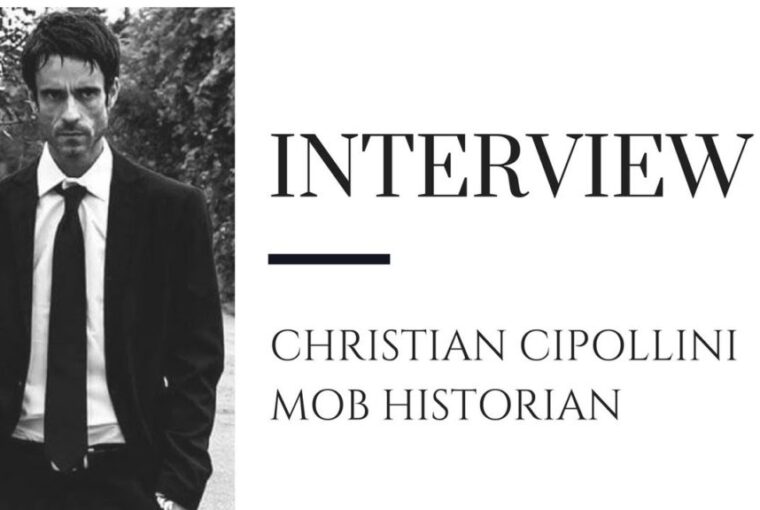 Joining us today is the award winning author, journalist and researcher, Christian Cipollini. Cipollini has published several books on organized crime, all of which we have featured on the NCS over the course of the last 12 months.

You can buy the following books below:

Murder Inc.: Mysteries of the Mob’s Most Deadly Hit Squad

Christian has also appeared as a guest expert on several TV shows including the Biography Channel Series “Gangsters: America’s Most Evil” and on the History Channel Series “United Stuff of America”.

We wanted to learn a little more about the man behind the award-winning books, and get a better understanding of Christian Cipollini.

The NCS: How old were you when you first started to become interested in the history of organized crime?

Christian Cipollini: History and writing were two areas of interest for me going back to grade school, but as I got older – darker history really grabbed my attention. That, plus having a dad who was a narcotics officer, the interest took a while to germinate but as you can imagine – the seed started very young.

The NCS: You have published an award winning book on Lucky Luciano [Congratulations from all at NCS on this achievement]. Was he the first character that you started to gain interest in?

Christian Cipollini: Thank you so much. Actually Luciano was the second crime figure to mesmerize me. The first was John Gotti. Long story short, it was very around 1990 that I really began following the Gotti situation, and then I consumed every book on mob history I could find in libraries and bookstores. I literally stumbled upon a 1st edition of The Last Testament of Lucky Luciano at a book fair in 1991, got it for fifty cents. I was officially addicted, not to mention driven to realize how much information was taken for fact but was so untrue, as most of us know question the facts of that book in particular.

The NCS: Knowing so much about Lucky Luciano, what one fact of his inspires you?

Christian Cipollini: Very good question. Overall, I truly feel the most ‘inspiration’ comes from the fact that Luciano did not do it alone. By that I mean, when I realized that Lucky wasn’t some lone wolf, not a boss of all bosses, but was part of an amazingly dynamic ensemble cast – that just motivated me to dig into, especially, the lesser known characters and situations of the era. They were all interconnected and it drives me to find deeper connections, etc.

The NCS: …and if you had the chance to meet Lucky and ask him one question, what question would that be?

Christian Cipollini: One question, I’d probably ask him who killed Arnold Rothstein – because I’m personally convinced that Lucky and about a dozen of his associates were involved, or at the very least, made out very well in the wake of that murder. Or, I’d just ask if him if he liked my book!

The NCS: Out of the three books you have available, which took the most amount of time for you to research and then get published?

Christian Cipollini: Each one was so very different, so was surprising even to me that each took its toll in different ways. Diary of a Motor City Hit Man was a challenge because so little had ever been written on the subject – Chester Wheeler Campbell. Lots and lots of research however always turns up things, but it takes time and the behind-the-scenes help from amazing people. My publisher was just as unsure at first as I was that enough information could be found, but he took a chance on it and voila!

Lucky Luciano wasn’t easier per se, but because I’d been so immersed in the subject for twenty years, and the fact I didn’t want to try and reinvent the wheel – that book was fun to research and give readers more of an overview with lots of fascinating side-stories not generally delved into elsewhere.

Murder Inc. – the most nerve-wracking. Researching not one or two characters, but basically three dozen, and then to avoid rehashing everything already written in Burton Turkus’s book – a daunting challenge for sure. Then, narrowing it down to a size and style that even casual readers could consume easily was tough because you could write three volumes at least on that ten year period of organized crime insanity! But again, so exciting to find those little ‘needles in haystacks’ of weird facts, and so forth.

The NCS: They say that you know you have made it when you get yourself on TV as an expert in your field. How did that first appearance on the Biography Channel come about, and how did it make you feel?

Christian Cipollini: To receive that sort of phone call the very first time was, for me, a natural high, period. Surreal, but once you digest it, so amazing that something you’ve worked hard for has earned some recognition for yourself. I admit I was nervous at first, but a little advice from colleagues and family reminded me to ‘own it’ because if you truly know your subject – it will all be smooth.

Christian Cipollini: Professionally, I still believe landing that first book deal and more importantly perhaps – completing that dream I had since fourth grade – writing a book. You’re never too old and its never too late to reach it!

The NCS: If you could go back and live during any period in the 20th century, which decade would you chose and why?

Christian Cipollini: Easy one – 1930’s. I absolutely adore the late 20’s and the entire 1930’s. The styles, the history, the people, the culture, and I’m pretty sure in a prior life I was there – we’ll just not discuss what exactly I think my profession was!

The NCS: Over the years we have read about many Mafia events, from the St. Valentine’s Day Massacre to the Apalachin Meeting. Have you ever had the chance to visit a location that is steeped in Mafia history?

Christian Cipollini: I’ve not yet been to the St. Valentine’s Massacre area of Chicago, nor to the Apalachin area yet. Of course Las Vegas is great, and Manhattan, plus the cemetery in Queens where Lucky and so many other mobsters are laid to rest. On my bucket list though is Havana, Hotel Nacional and the Mirimar neighborhood where Luciano had a house, also to hit all the spots in Detroit where Chester from the Hit Man book roamed and did business.

The NCS: As well as being a successful author, you are known for your collection of rare images from organized crime history. What was the first artifact that started off your collection?

Christian Cipollini: The very first was a 1975 press photo of Chester Wheeler Campbell. That photo is what lit the metaphorical fire for me to research him and end up writing Diary of a Motor City Hit Man. And what inspired me to even begin looking for such items was two-fold: I had bought a copy of Arthur Nash’s book New York City Gangland, which is filled with his own collection of originals, and as I often joke to him, was hooked like a crack addict on acquiring original photographs, artifacts. Also around the same time, I was creating some infographics and t-shirts of mob history and I wanted to have the inspiring imagery, physically, like a mini museum! So a few years later and my pride and joy has grown into quite a collection.

The NCS: What advice can you give to up and coming writers who want to follow in your footsteps?

Christian Cipollini: I know it sounds cliché, but seriously – never ever give up. You may hit roadblocks, get discouraged, and want to throw in the towel sometimes, no doubt. Trust me – it makes you stronger. Many times things happen that steer your course in an entirely different direction and you find that in looking back – it was exactly what needed to happen. Make your mark, don’t go it alone, and own it, all of it – good, bad, ugly. Read everything your peers have done, and learn that nobody, and I mean nobody, has all the answers and none of us gets it correct every single time. That’s what makes it so addictive – there is always some fact, theory, moment in time that can be found, revisited, or expanded upon. It took me 40 years to finally achieve that childhood dream, so don’t stop – just learn to adapt.

The NCS: Is there anything exciting that you have planned for the future that you can share with the NCS readers?

Christian Cipollini: I’m chomping at the bit to share a couple big things, but still under wraps. However, I am going to be working out an appearance at the Mob Museum in Las Vegas, there are some little side-projects already in the can that will materialize soon, and Diary of a Motor City Hit Man: The Chester Wheeler Campbell story is in the process of, well let’s just say – having new life pumped into it on several different platforms. Details of all this and more to come soon, I promise.

The NCS: Christian, thanks for your time and good luck with your future projects.

Christian Cipollini: I thank you NCS, truly very grateful for all the support from everyone.

You can also keep updated on his website GanglandLegends.com

What Happened to Frank Costello’s Voice?

Sam Giancana – NCS Mobster of the Month for June 2015