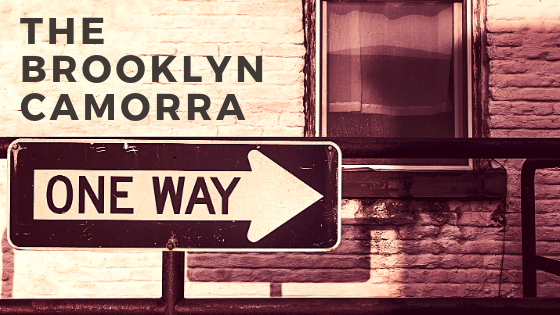 At the turn of the 20th century, residents of impoverished towns and villages in Italy’s southern regions were leaving in their tens of thousands in search of a better life in America. Amongst them was Enrico Alfano, a man, who according to some, was behind the infamous March 12, 1909 slaying of a New York law enforcement officer Joseph Petrosino who was shot to death in Palermo, Sicily’s capital city, whilst waiting to speak with an informant Petrosino believed had information on the Mafia. Alfano arrived in America on March 17, 1907 having left Italy in a hurry, and in secret.

In his home town of Naples, Alfano was arrested for the double murder of a husband and wife. On June 5, 1906, Gennaro Cuocolo (a Camorrist boss) and his wife, former prostitute Maria Cutinelli were found – in separate locations – brutally murdered. Cuocolo was found dead on the ashore at Cupa Calastro, Torre del Greco, Naples with over 40 stab wounds and numerous blows. Local carabinieri later found his wife Maria dead at their home on the Via Nardones, Naples. The subsequent investigation refused to turn up any evidence or witnesses, mainly in part due to the Camorra law of silence. The authorities had no other choice, less than two months after his arrest, Alfano was released from prison.

However, a young 22-year-old Camorrista with a ‘braggadocio’ (boastful/arrogant) character, Gennaro Abattemaggio would break the code of silence and give authorities the names of all those involved in the double murder of Cuocolo and his wife, including the name of the head of the Italian Camorra, Enrico Alfano. Wanted once again, Alfano would leave Naples, finally arriving in New York. In 1926, Gennaro Abattemaggio retracted all his accusations, but the case was never reopened.

In no time, Alfano had an illegal gambling den running in the cellar of a building, in a road that will forever remain linked to Mafia activity, Mulberry Street, New York, number 108. Alfano, appeared on the radar of sergeant Joseph Petrosino of the New York City Police Department. April 17, 1907 would be the day, that along with colleagues, Petrosino raided the address, Alfano was found in the flat on the first floor. Within three days Alfano was extradited to his native Naples. Considering Petrosino was murdered in March 1909, one can easily see how, at the time, Alfano was linked to his murder which, was later attributed to La Cosa Nostra.

In March 1911, the trial – which was held in Viterbo, Lazio due to the suspicion of corruption of Neapolitan officials and would last for the next seventeen months – was something more akin to a hearing into the Camorra as a whole.

Along with Alfano stood 46 other alleged members of one of the largest and oldest of the criminal organisations in Italy. The extortion racket known as ‘The Black Hand’ can have its roots traced back to mid-eighteenth Naples, which was then a part of ‘Regno di Napoli’ – The Kingdom of Naples – an area created following the wars of 1282 – 1302 involving the Sicilian Vespers. 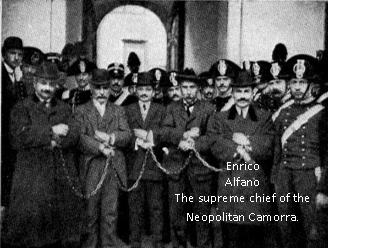 The following is from a New York Times report published during the trial at Viterbo.

“Our own methods of criminal procedure have long been the object of severe and just criticism, and in our exaggerated and insincere fear of convicting the innocent we have made- the conviction of the guilty always difficult and often impossible. Quite unknown in our criminal courts, however, and fortunately, are such strange scenes as are presented daily at the trial of the Camorrists now going on in Italy. There the law is so little confident of its own powers that the accused are herded together m one steel cage, apparently with the idea of preventing attempts at rescue by a public largely sympathetic with organized robbery and assassination, while the witness for the prosecution is secluded in another cage, lest he be torn to pieces by the prisoners or their friends. The pleadings on each side seem to consist largely of denunciations and threats aimed at the other, tears of rage alternate with shrieks of the same origin, and order is only occasionally restored, when the din rises too high, by the curiously gentle expedient of suspending the session of the court. How justice is to be the outcome of proceedings such as these, and thus conducted, may be comprehensible to what is called — with little reason — the Latin mind, but others are lost in amazement. It is all highly interesting, no doubt, but one is no more likely to regret that we do not carry on our trials in this way than he is to be sorry that our criminals are not such important and powerful persons as the members of the Camorra seem to be. Only one fact stands out clearly at Viterbo — the fact that the attack on the banded brigands has been so long delayed that the authority of the law can not now be vindicated without producing a sort of civil war. Which ought to be humiliating for somebody.”

The New York Times piece was also published within another news article written in November 1911 by a former assistant DA of New York, Arthur Train. Train had been in Italy and had attended the circus at Viterbo, he goes into great detail covering not only the trial but also some of the main players of the Camorra who are among the accused. I have provided a link that will take you to an online version of the original article Train wrote. 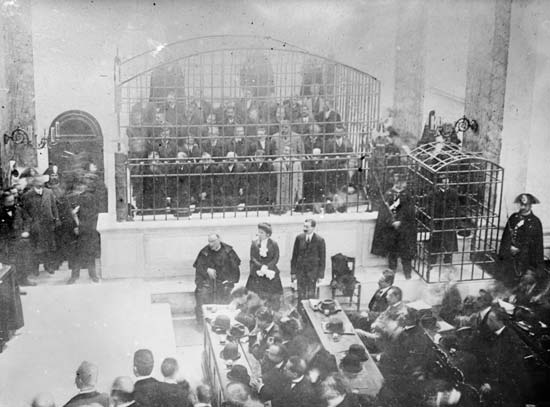 The trial had been under way for some time, when, on May 2, one of the accused, Corrado Sortino – the man that ‘rat’ Abattemaggio informed authorities had been the one to have committed the actual murders of Cuocolo and his wife – turned to an invited American official and said, in reference to the murder of New York cop Joseph Petrosino,

“If we were acquitted here we will go to America, where you will accuse us of the murder of Petrosino!”.

As that mornings court session ended for lunch and the accused were being led away in handcuffs, one turned to the seated American guest and shouted,

The American who had been invited to attend the trial by President Bianchi was the son of former general-in-chief of the Union Armies as well as Army Commander, a dual role that President Abraham Lincoln was not happy with.

George Brinton McClellan, with the suffix Jr. shared his father’s full name. McClellan Jr. – who himself had run for presidency in 1904 but failed at the first ballot to be selected by the Democrats – was the former Mayor of New York, a post he held over two terms, from 1903 – 1909. The New York Times, at the time reported a quote from McClellan: “What I heard at the trial today confirms the impression I had received in reading the newspapers. Two points struck me; first, the absence of red tape, which enables the President to get at the bottom of everything during the trial, and, second, the wonderful ability of Abattemaggio and the accused Sortino.”

The ‘absence of red tape’, no doubt, also, alluded to evidence of questionable integrity. Images of later, similar ‘hearings’ in the US spring to mind. Coincidently, although not related by blood, the name McClellan, once again, synonymous with investigations into organised crime families and groups.

The Mafia-Camorra war between 1915-1917 would see plenty of blood shed and lives lost on the streets of early 20th century New York, as the Sicilian crime family, now the Genovese Crime family, then the Morello family, along with the subsequent trials of 1918 virtually wiped out any existence of ‘The Brooklyn Camorra’.

Gomorrah To Blame For Increase in Crime Says Mayor of Naples