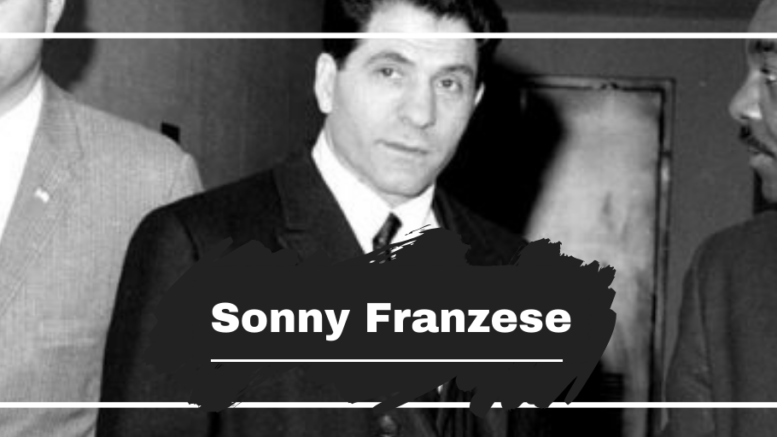 From 1964 to 1967 Sonny was underboss in the Colombo Crime Family, a period where Joe Colombo led the family until his demise in 1971 when he was shot and put into a coma.

In 1967 Sonny was sent to prison for 50 years on bank robbery charges. He was then in and out of prison from his parole date in 1978 for the next two decades, violating his parole agreement at least six times.

In 2004 he was given the opportunity to take the underboss role once again, when he was just a few years off turning 90! He held the underboss title for some 7 years before he was convicted in 2011 for extortion, his son had testified against him, becoming the first son of a New York mobster to turn state’s evidence and testify against his father. Sonny was handed down an 8 year sentence. In 2011 Sonny was 94 years old, and no one thought he would return to life outside prison, but incredibly the 100 year old Franzese was released in 2017 (which also marked the 50th year date of his original sentence) to return home.

Franzese was heavily involved in the movie business, both father and son. Sonny actually helped finance a $22,000 budget for the adult film ‘Deep Throat’ which ended up raking in up to $50 milion in revenue. He also had a hand in The Texas Chain Saw Massacre which generated some $30 million from a budget of around $100,000, and more recently he was said to have helped and produced ‘This Thing of Ours’ which was released in 2003 and starred the late Frank Vincent and The Godfathers’ James Caan.