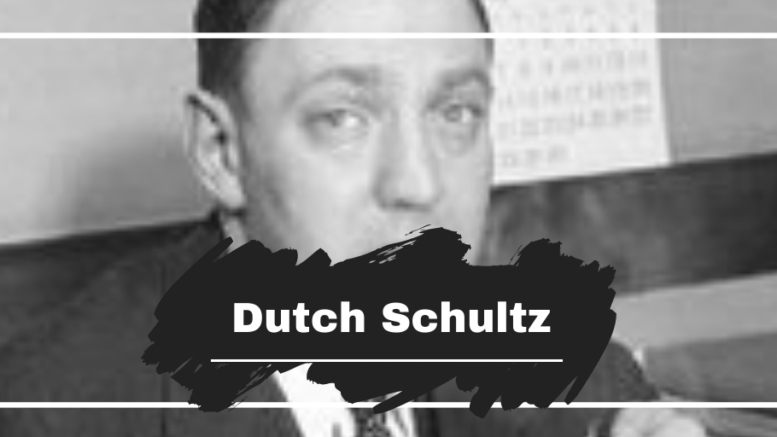 On this day in 1935 Arthur Flegenheimer who was better known as Dutch Schultz died from gunshot wounds received 22 hours beforehand.

On October 23 at around 10:15pm The Dutchman was shot at the Palace Chophouse restaurant which he used as his base headquarters. The restaurant was situated at 12 East Park Street in New Jersey. During the shootout his two bodyguards and accountant were hit and died. Why Was a Contract Put on Schultz?

Schultz’s rackets were threatened by Lucky Luciano, and tax evasion trials lead by prosecutor Thomas E.Dewey. In an effort to avert his conviction, Schultz asked the Commission for permission to take out Dewey, which they declined.

After Schultz disobeyed the Commission and attempted to carry out the hit himself, they eventually had no choice but to put a contract out on his head. He had essentially signed his own death warrant at this point.

He was shot once, below the heart in the bathroom of the restaurant but managed to keep up and staggered out and sat at a table (not wanting to die in the bathroom). The hit was carried out by Murder Inc members (Charles Workman and Mendy Weiss, acting on orders from Lepke Buchalter). Dutch Crouching Over a Table

Dutch didn’t die straight away, he was given plenty of brandy as the medical team that arrived on the scene didn’t have any pain-relief with them. He was then taken to hospital in an ambulance, and after surgery it was thought he might live. Unfortunately for the Dutchman, the bullets used by Charles Workman (whether intentional or not) were rust coated so should Dutch pull through and recover the rust would have resulted in a fatal bloodstream infection that would have finished him.

He lasted for about 22 hours in the hospital before dying. Being in and out of consciousness, and probably dosed up on drugs to help the pain he uttered some random last words:

A boy has never wept…nor dashed a thousand kin.
You can play jacks, and girls do that with a soft ball and do tricks with it.
Oh, Oh, dog Biscuit, and when he is happy he doesn’t get snappy