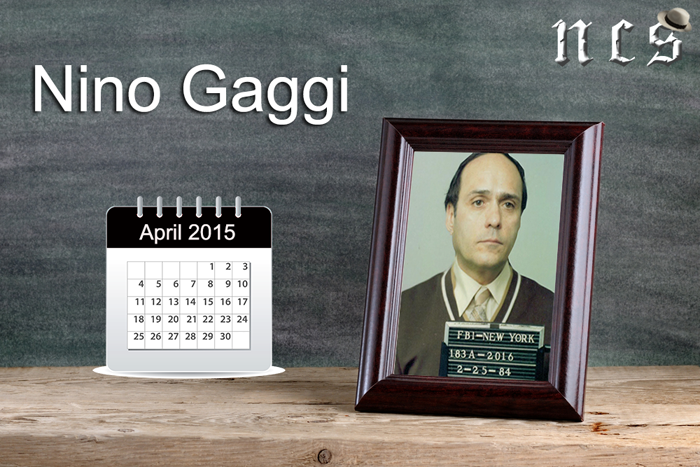 Those were the chilling words of a Gambino capo, who was the immediate superior to mobster Roy DeMeo, who ran the infamous DeMeo Crew. His name, Antonino Gaggi (pronounced: “Gadgie”).

Nino Gaggi’s father’s cousin was mobster Frank Scalise, a founding member of the Gambino family and the man who helped introduce Gaggi into mob life. Scalise helped Gaggi obtain a job as a Ghost Employee at a truck dock. Being a “no show” employee helped Gaggi avoid prosecution as he could prove he held a legitimate job with taxable income, but it would also help him move into loan sharking and other mob activities.

In 1957, the Gambino family underwent a dramatic change in leadership. In June, Scalise was shot and killed at a fruit stand in the Bronx. Then in October, boss Albert Anastasia was shot in a barber’s chair at a Manhattan hotel.

In October 1960, Gaggi committed his first murder for the Gambino family. He served on a hit squad that murdered mobster Vincent Squillante, the man who probably killed Scalise. According to Montiglio, Gaggi described the murder:

Gaggi had now made his bones and was inducted into the Gambino family.

By the mid-1960s, Gaggi partnered with mobster Roy DeMeo, who was running a stolen car ring in the Brooklyn neighborhoods of Flatlands and Canarsie. DeMeo had connections with the Lucchese family and a reputation as a capable and resourceful earner. A decade on and Roy DeMeo would end up working for Gaggi, and despite Gaggi not being a part of most of the DeMeo Crew murders that lead on from this period, he did get involved in some.

In late 1976, a leadership meeting was held at Gaggi’s house after the death of Carlo Gambino. It was here that Paul Castellano became the new Gambino boss. In turn, Castellano agreed to retain Dellacroce as underboss. Gaggi was promoted to capo of Castellano’s old crew, and from that point Gaggi remained loyal to Castellano, hoping to become underboss.

On June 7, 1978, Gaggi and nine other mobsters,were charged with racketeering, conspiracy and fraud charges as a result of a year-long Federal investigation into the bankruptcy of a theatre in New York. The majority of the evidence in this case came from wiretapped conversations; fortunately for Gaggi, he never said anything incriminating. In December 1978 Gaggi was cleared of all charges.

Shortly after this Gaggi and DeMeo shot and killed both Eppolitos, father and son. However, a witness alerted an off-duty policeman who saw Nino Gaggi walking away from the murder scene. Gaggi was lucky because a shoot-out with the police officer broke out, and Gaggi was shot in the neck but survived. He was then charged with murder and attempted murder but got away with just an assault charge and a maximum time of 15 years in prison.

Gaggi didn’t spend much time behind bars however, he had bribed a juror to make false claims of government misconduct during the trial.

This prison time would eventually be the downfall of Gaggi, as DeMeo’s operations had been targeted by the FBI. Some of his crew has turned informants and with fear of DeMeo turning is he was arrested, Castellano decided to put a contract on DeMeos head. It is believed that Gaggi was either the killer or had a major part in the killing.

DeMeo crew members that had turned informant slowly began giving evidence on Gaggi and he over the next 10 years he would be in the firing line for several indictments from racketeering to murder and everything in between.

While being held at a Correctional Center for trial, Gaggi died of a heart attack. Gaggi had apparently told a guard that he was suffering chest pain but the guard did nothing to act on this. He then suffered a major heart attack, but was not transported to a hospital for several hours. He died on the same day.

Gaggi’s death sparked a controversy that eventually resulted https://junglefitnessoc.com/ambien-for-sale/ in better medical conditions in New York City prisons, and his wife successfully sued for negligence. Had he been sent to hospital quickly, he could have survived.