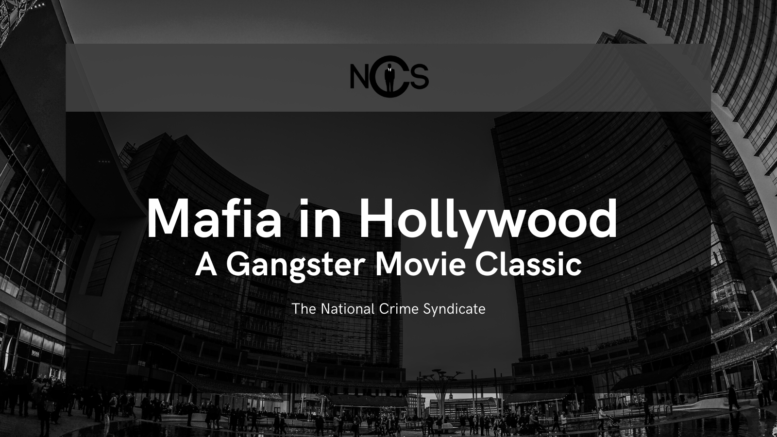 The Irishman is the first big American mob movie in years. That’s why we decided to look back at how the image of gangsters on the screen has changed in 90 years.  How the phenomenon of gangsterism and the Mafia in cinema, has influenced all areas of human activity, from the popularization of casinos and the creation of resources such as https://nationalcasino.com/en_ca/casino/roulette, where anyone can play games,  to revolutions in the world of fashion and art.

The original Scarface movie from the early ’30s is perhaps the first benchmark gangster movie in Hollywood history. It didn’t appear by accident, but as a reaction to the rampant gangsterism in the U.S. during the Great Depression, when gangsters were real rock stars. Tony Camonte, the protagonist of the black-and-white Scarface, was based on Al Capone but could have been anyone, like John Dillinger (and Capone liked the movie, by the way). Since Scarface essentially inaugurated the genre of gangster cinema in Hollywood, the picture was later cited by the audience, from fellow genre members to Quentin Tarantino.

Fifty years later the remake by Brian De Palma hits the eyes with the bright Florida sun, and the main hero – Cuban hooligan-mafioso Tony Montana – seemed to be a gangster of an absolutely different type. Angry, unprincipled, flashy, straightforward, with émigré effrontery and a swear word. Instead of floor coats and distinctive hats, he wore a worn Hawaiian shirt, a toothpick in his mouth, and a table full of cocaine. De Palma in “Scarface” showed the new organized crime in the U.S., but at the same time immortalized in the history of cinema Miami, with its famous promenade, the eternally high sun, and loud nightclubs. And finally made Al Pacino, perhaps the main actor of his generation: his role in “Scarface” – one of the best performances in the genre in general.

Before “The Irishman,” Martin Scorsese turned to the gangster movie genre many times. In the 70’s he shot “Mean Streets” – in fact, angry and relevant at that time a crime drama about the lives of young Italo-Americans from the troubled neighborhoods of New York. Scorsese knew almost everything about these kids – after all, he himself grew up in such a neighborhood. Today, Mean Streets is still not just a cool movie, but also the first work in the genre for Scorsese, as well as the first significant career roles for Harvey Keitel and Robert De Niro. The latter would go on to star in Scorsese’s iconic films more than once over the next decade and become the director’s on-screen alter ego.

“Goodfellas” (1990) is considered an epitaph to the classic American genre of gangster cinema. Indeed, in it, Scorsese as if draws a line under it, as if alone closing a large chapter in the history of cinema. But there’s no way around it: the 90s will come out and “Donnie Brasco” and “Miller’s Crossroads” and “Carlito’s Way,” and the genre itself will prove more alive than many.

Scorsese himself, too, will not deny himself the pleasure of immersing himself again in the criminal world of the country and will shoot “Casino,” the last collaboration with Robert De Niro before “The Irishman.” There is an opinion that it is the story of the downfall of Sam Rothstein, to whom the Mafia puts in charge of a fashionable casino in Las Vegas, that is the best gangster picture in Scorsese’s portfolio.

The premier gangster saga of all time, and simultaneously one of the best family values films in American film history. The first “Godfather” the then young Coppola filmmaker shot under close supervision of producers who nearly robbed him of his authorship pictures (especially “zealous” famous Robert Evans). They criticized Coppola for everything – the timing, strange casting, shooting in Rembrandt′s half-light. But the director, despite little experience, managed in the end to defend the picture, which brought him fame, money and created a powerful reputation – until about the end of 70 Coppola remained the chief director of the United States and even the whole world.

The second part about the life of the Corleone family Coppola initially did not want to shoot, but Paramount bosses persuaded him. The Godfather sequel has been called by many the perfect sequel and the rare example where the second part was as good (if not better) than the original. It was also the first sequel to win a major Oscar nomination for best picture. Many years later, only the final part of the Lord of the Rings trilogy, The Return of the King, would repeat this achievement.

Fifteen years later, Coppola will put an end to the story of Michael Corleone, releasing the final, the weakest part of the trilogy – about the last years of the life of the main character, with whom the director has always strongly associated himself. The third Godfather doesn’t have the thick and sticky atmosphere of the first pictures, it’s more flamboyant and pompous, but it’s not a bad movie. Especially if you don’t compare it head-on to the previous films.

Gangsters of the ‘80s: Once Upon a Time in America and the Untouchables

In the ’80s, American cinema once again turned to the gangster genre. We have already mentioned “The Godfather” and “Goodfellas”, which started in the late ‘80s, but we should also mention two other significant films of that period – “Once Upon a Time in America” by Sergio Leone and “The Untouchables” by Brian De Palma.

First, in 1984, Sergio Leone came out and tried to rein in the second genre of film, after the Western. Unlike, say, “The Godfather”, a more concrete and tough movie, “Once Upon a Time in America” – it’s a movie not so much about family ties, but about growing up. The story of a gangster nicknamed “Noodle” who returns to his native neighborhood many years later is a classic nostalgic story from European cinema of the second half of the 20th century. If Coppola is more interested in the present and the future, Leone is more interested in the past. Ennio Morricone’s terrific music, one of Robert De Niro’s best roles, and, as always, Sergio Leone’s steady hand turned Once Upon a Time in America into a timeless classic. The most annoying thing is that the film completely missed the Oscars in its time, even though it belongs there.

Brian De Palma’s “The Untouchables” is no longer an elegiac drama, but a very concrete attempt to return to the golden era of gangster cinema. It is a picture about a team of Untouchables, who waged a guerrilla war against the empire of Al Capone. Again on the screen De Niro – now much plumped as Al Capone. But the leading roles – only then gaining popularity Kevin Costner and forever young Sean Connery, who, despite all the achievements in film before and after, will receive his only “Oscar” just for this movie. Unlike his own “Scarface” here, De Palma almost does not experiment, intoxicatingly reproducing the era on the screen – with serious men in hats with “Thompsons” on horseback, underground drinking, uncontrolled street violence, and gangster-superstars.

If we cross out Scorsese’s “Casino” and Michael Mann (discussed below), the Coen Brothers and Sam Mendes are the main gangster movies of the new century. And they are completely different from each other, which makes it more interesting to bump them together in the same block.

“Miller’s Crossing” is the Coen brothers’ last picture before their world triumph at Cannes with “Barton Fink.” Here, Joel and Ethan are still trying to find their own intonation, playing with the genre more than subduing it. “Miller’s Crossing” is a very talented attempt at a classic gangster movie of the first half of the 20th century under new circumstances. With a huge cast of characters and plotlines twisted around each other, with brutality, murder, and treason. It may not be the brothers’ best picture, but if you like mob movies, it’s impossible to ignore.

“Road to Perdition” by Sam Mendes is easy to imagine as an epilogue to just about all of the aforementioned films, as it deals with an important gangster theme – getting out of the criminal business. This picture is about a well-behaved American, Mike Sullivan, whose son accidentally discovers that his father is a hitman in the service of a mobster. If Coppola in The Godfather talked about family ties as the most important condition for a successful business, with Mendes the family is the only thread that can pull him out of a life of crime. Hanks’ shrill (as always) performance, Mendes at his best, lots of rain, and neatly dressed men in cloaks are a great movie to see the era from a slightly different angle.

Michael Mann is the foremost connoisseur of male characters in American cinema, who first brought Al Pacino and Robert De Niro face-to-face in one film (in the second The Godfather, Coppola tactfully separated them by era). His “Heat” is a benchmark movie about men at work, and a film with perhaps the most impressive on-screen duo in movie history. All action directors have tried to repeat the shootout scenes since (almost always unsuccessfully), and the episode in the cafe – the first meeting between Pacino and De Niro – will long be parsed in American director’s departments. “Heat” is the high point of the action genre, still a tense and exciting enough movie to keep woozy multiplex-goers from getting bored watching it, but also complex and subtle enough to please cinephiles and seasoned moviegoers.

Mann’s “Johnny D.” is the same as “Heat,” but on classic gangster-era material. De Niro is replaced by Depp as John Dillinger, Bale as FBI agent Melvin Purvis instead of Pacino, semi-automatic rifles and ’90s supercars instead of Thompsons and grungy Packards with Oldsmobiles. Mann again shows criminal life not only as a one-way ticket but also as a perpetual battle between the forces of good and evil. Perhaps more romantic than in the same “Heat,” but then again – think of the era of superstar gangsters, and the questions are answered.