It took an alleged 50 times of Martin Scorsese asking him, but the official news now is that he has finally convinced Joe Pesci to team up with Robert De Niro for his next film ‘The Irishman‘ completing the Goodfellas reunion everybody was wanting.

The Irishman – also referred to as I Heard You Paint Houses (mob slang for contract killings) – is based on the book by Charles Brandt which follows the “biggest mob hit in history.“ De Niro’s role will be that of notorious mobster Frank ‘The Irishman’ Sheeran.

You can grab a copy of that book below. 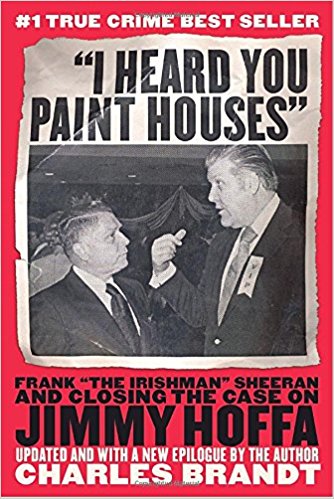 Not only will we see these two greats working alongside each other, but Al Pacino is also on the bill. This, incredibly will be Pacino’s first collaboration with Martin Scorsese! Who would have thought it. It will be the tenth time that De Niro has worked with the filmmaker.

Production began on the mob drama last year and it was recently reported that Netflix, the entertainment company who will be celebrating its 20th year anniversary later last month, had impressively acquired worldwide rights to the film and that, to qualify for Oscar recognition, it would receive a small theatrical release.

Pesci will play Pennsylvanian Mafia boss Russell Bufalino, a key suspect in the disappearance of mobster Jimmy Hoffa back in the early 80’s.

Harvey Keitel and Bobby Cannavale (Boardwalk Empire fans will know as Gyp Rosetti) are also in talks to join the cast before the film begins shooting in New York, as early as August.

Want to Star in a Movie with Al Pacino?