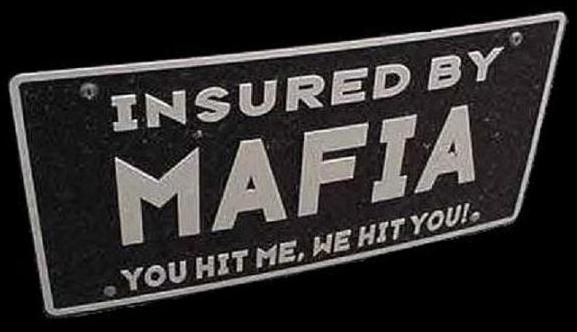 Early one morning this past November, I saw something I knew had to exist, but didn’t expect to see. While fighting my way through traffic, a car suddenly cut me off. At first I was too mad to notice it. Then, there in front of me the letters M, O, and B popped out as clear as day, stenciled across a vanity license plate. Like I said, I knew this had to be out there, so I had built up a grand vision in my mind of some E-type Jag, a big black Cadillac or better still, some vintage 1940’s beauty.

No, before me sat a plain old silver Honda Civic. I had not been that disappointed since the final season of I’m So Boredwalk Empire. I’m of the ilk that believes if you’re going to have that plate on your car you’re assuming responsibility to uphold a certain unspoken standard. This was not just bad taste or poor judgment; it was borderline disrespect to the very institution it was meant to represent. I stewed in the heavy traffic. Had I been behind the counter at the DMV when this abomination occurred, I would have denied the owner their request for the plate and posed the question, “Have you ever seen a picture of Paul Castellano in a Honda Civic?”

Why do I care about something most people would consider to be trivial at best? Why do I yell at the television when I see Christian Slater as Lucky Luciano, throwing Salvatore Maranzano out of an office window? Why would I drag my extremely patient brother-in-law around New York City, looking for bombed mausoleums, bullet holes in walls, and try to talk my way past the doorman at the Majestic? And why the hell do I have a picture of a guy they called the Prime Minister of the Underworld on my phone instead of my beautiful wife and daughter like normal men my age?

I guess it’s best to start at the beginning…

My name is Casey McBride. Some of you reading this may know me as the Costello guy from my comments on more then a few NCS posts. A while back, long after the series had its day, I finally sat down and watched The Sopranos in its entirety. Like a lot of people, I got caught up in the characters and their stories. I was so impressed, I wrote my one and only fan letter to Vince Curatola. He was kind enough to write me back and I still have his contact in my phone under the name Johnny Sack. When I finished the series I ran out and bought a copy of Selwyn Raab’s opus, Five Families. I was shocked at how many plot lines from the The Sopranos were simply real life events. In fact, the real stories were even more unbelievable. Canaries who could sing but couldn’t fly, Madhatters, secret rituals and dark commissions: I was hooked. I stopped reading fiction and watching movies altogether. Instead, I tuned into mob documentaries and read books like The Valachi Papers, Uncle Frank, and The Last Testament of Lucky Luciano. And the only thing I found more incredible than the stories themselves were the characters in them.

Author Santha Rama Rau once said that as a writer she was always looking for interesting characters in real life. She found that character in what she described as,

“a rather charming older man” at a cocktail party.

That man was none other than the Prime Minister himself, and she said it best when she asked,

“Who could be more interesting than that?”

This uniquely American history is filled with men and women, on both sides of the law, so fantastical a Hollywood screenwriter could never make them up. I think it’s important their stories are told and I do not want to leave it up to Hollywood. I am by no means an expert on all things Cosa Nostra; my NCS Lansky quiz results will attest to that. My interest lies mainly in what I call the “Rolls-Royce years” of New York, that golden age of the 30’s, 40’s, and 50’s, but I find all of the eras and their different factions intriguing. I do not condone or try to moralize the violence inherent in this subject matter, but I believe there are lessons to be learned from the lives of those who were sometimes despicable, and at the same time, strangely admirable. After all, isn’t that the story of all people of power through out history?

So I guess, some guys are Civil War scholars, some are WWII buffs, and some collect stuff from the Alamo. As much as I would love to be known as a scholarly, organized crime historian, I think mob junkie would be closer to be truth.

I want to give a great big thank yooze’ to the National Crime Syndicate for giving me a soapbox. The NCS is an excellent, entertaining resource and I’m thrilled to be a part of it. In the coming weeks I have a couple of what I hope are unique and informative articles that I look forward to sharing. Next time I flip da’ coin and talk about those bullet holes I mentioned earlier.

Until then, remember to always sit at the back.