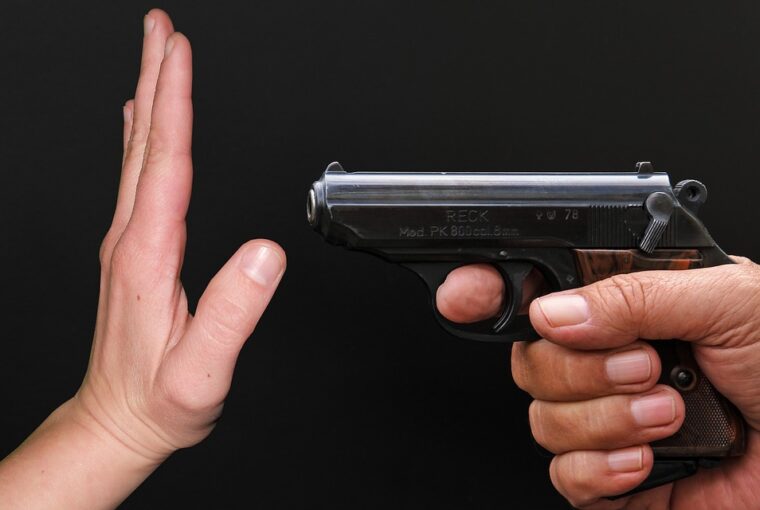 The issue of gun control has become a really hot one in recent times, thanks to a spate of mass shootings at various places throughout the country. Readers of this site will know that guns and America go way back though as gangsters and mobsters have been spilling blood for decades, with the long list of infamous Mafia hits including some truly brutal executions that left crime scenes looking like horror movies.

One of the most notorious executions of a mobster was the slaying of Paul ‘Big Paulie’ Castellano in 1985. Castellano had been good for the Mob for decades as his smart business sense made lots of money while also moving the Mafia away from risky areas like trafficking drugs and into extortion and money laundering. But the man who got nicknamed ‘The Howard Hughes of the Mob’ was shot outside a steak house in Manhattan after demanding too big a slice of the earnings.

Although the Mafia is merciless in dealing with its own when they step out of line, the law has also brought legendary gangsters to bloody ends. ‘Baby Face’ Nelson terrorised the depression-era US of the 1930s, but as with other gangsters of the 20th century who lived by the gun, he died by it too – as he was shot 17 times by FBI agents in 1934. He took several hours to die of his wounds.

Dramatic gangster shootings like these are more infrequent now, but they have been replaced by mass shootings of ordinary people. Amidst the calls for tighter controls on gun ownership though some think technology provides a better answer. Countries such as New Zealand are using the law to crack down on gun ownership, while others are looking towards advances in tech. One of the Las Vegas casinos has adopted the PATSCAN Cognitive Microwave Radar, which might sound like something you cook a gun in, but it is actually a security device that can sense concealed guns and other weapons using machine learning and radar.

Elsewhere, the Athena Security tool developed by two wealthy entrepreneurs is based on applying AI to the surveillance cameras that record so many gun killings. This is then used to actively detect the presence of a gun and alert either the police or security, rather than just passively capture the images. Many on the political right are wary of conventional gun control and there is an ongoing debate about how constitutional that option is. These tech solutions look like a promising way of at least reducing the risk of shootings

Guns and America have a long shared history and gun crime has always been part of the fabric of the country, thanks to the legendary gangsters and mobsters who walked the streets of its cities. Stopping the current mass shootings is something everyone is keen to do though, but technology not law could turn out to be the answer.