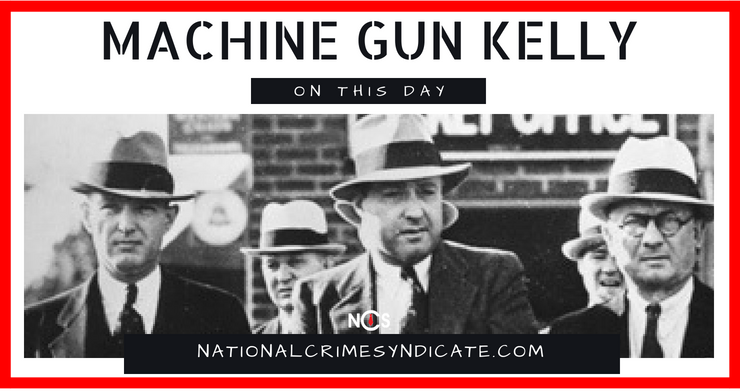 G-Man is a slang tern that is taken to mean government agent. According to the FBI website, G-Man is attributed to “Machine Gun Kelly,” a notorious 1930’s gangster who sent on a crime spree that landed him in Alcatraz in San Francisco.

According to the Federal Bureau of Investigation the term G-Man was underworld slang for any and all government agents before 1934. The detectives of J. Edgar Hoover’s Bureau of Investigation were so little known that they were confused with other agencies, such as the Secret Service or the Prohibition Bureau agents. By 1935 the only kind of agent called G-Man were the Special Agents of the FBI.

George “Machine Gun” Kelly was a wanted fugitive in 1935. He had kidnapped oil magnate Charles Urshcel and held him for $200,000 in ransom. After Urschel was released, a multi-state investigation tracked “Machine Gun” Kelly” across the country.

The FBI reported that on September 26, 1933, Kelly was found in a decrepit residence in Memphis, Tennessee. One version of the event was that Kelly stumbled out of bed and emerged with his hands up, crying “Don’t Shoot G-Men, Don’t’ Shoot.”

After this arrest the term G-Man became synonymous with the Special Agents of J. Edgar Hoover’s FBI. The colorful phrase was likely not really spoken by Kelly and was probably manufactured by the press, but no one can say for sure.

Machine Gun Kelly was born to a wealthy Memphis family in 1895. He was a poor student and quit school to marry Geneva Ramsey, with whom he had two children. The family struggled financially and Kelly soon turned to a life of petty crime.

Kelly left his family and Memphis along with a new girlfriend. Eventually he hooked up with Kathryn Thorne, who was a seasoned criminal in her own right.

According to a biography on Alcatraz History, Kelly was a relatively small time criminal until he met Thorne. Kathryn influenced Kelly on an elevated crime spree up the prestigious status of “Public Enemy Number One.” Kathryn purchased a machine gun and masterminded the marketing of her husband as “Machine Gun Kelly’ Many historians believe that it was Kathryn that was the mastermind behind a series of successful s
small bank robberies throughout Texas and Mississippi.

In 1933 the couple kidnapped Charles Urschel, a wealthy oil tycoon. Urschel’s family paid the $200,000 ransom and he was released after an eight day ordeal.

It was the kidnapping that sent both Kathryn and Kelly to prison, along with accomplices Albert Bates and Harvey Bailey. Kelly was sent to Alcatraz, here he was reportedly a model prisoner, much to the consternation of his fellow prisoners who tired of his constant boasting about robberies and murders he had never committed. At Alcatraz he worked as an altar boy in the prison chapel, in the laundry and in the office.

In 1951 Kelly as transferred to Leavenworth, where he died of a heart attack in 1954, on his 59th birthday. His wife, Kathryn, was released from prison in 1958 and took a job as a bookkeeper in an Oklahoma hospital.