The Events Leading up to The Failed Frank Costello Hit

In “this thing of ours,” it’s never quite as simple as good guys and bad guys. Some times you have good bad guys, and even badder bad ones. That is the case with this story. Here are some of the events that led up to the hit on Frank Costello: 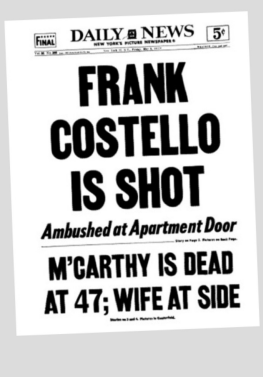 Singer Billy Daniels, the man behind the tune “That Old Black Magic,” was once involved in an argument with his wife at New York City’s Gold Key Club. Daniels, a black man, slapped his Wife, a white woman, in full view of the club’s patrons. One of the patrons who witnessed the argument was mobster, Vincent “Bruno” Mauro. Seeing a mixed race couple had already pushed Mauro’s buttons, but seeing Daniels strike a woman was too much. He fell upon the singer immediately, throwing him out of the second story window, and sending Daniels to the emergency room. Though racial climates were different in those days, everyone who witnessed the incident felt Mauro was in the wrong, but he refused to apologize for his actions. Daniels Was terrified his life was in danger and Frank Costello was brought in to negotiate a truce.

Like an exasperated father speaks to his son, Frank convinced Mauro that he was out of line and should be man enough to admit it. The incident could make trouble for a lot of people, and the sooner it was smoothed over, the better for everyone. Mauro heeded Frank’s advice, and a truce was made. Soon, both parties were back at the Gold Key Club, with their grievances behind them.

Years later, on Thursday, May 2, 1957, Mauro and the Prime Minister were once again in a meeting, this time at Chandler’s restaurant and under more pleasant circumstances. Frank had met Mauro and Tony Bender to discuss family business. Bender was a confident of Vito Genovese, and ran Greenwich Village. Mauro served as one of his top lieutenants. The group spoke quietly for a short time and then Bender, who requested the meeting, left. Costello, Bruno, and model agency owner, Phil Kennedy, who had happened to come in for a drink, carried on a friendly conversation. Frank, and Kennedy were good friends and the Boss had grown to like Mauro. Recently, Mauro had a habit of showing up just about everywhere “Mr. Schedule,” as Costello referred to himself, seemed to be. The two had become quite friendly.

Costello invited Mauro and Kennedy to join him and his party for dinner at L’Aiglon that evening, but Mauro had other business. He would call later, and if the party was still going, he would join them.

Costello and Kennedy caught a cab, and joined Frank’s godson, Gene Pope Jr., columnist, John Miller and his wife Cindy, Al and Rose Minaci, and Mrs. Costello, who everyone knew as Bobbie. The atmosphere was jubilant. Frank had recently got out of a five year stint in “the jug,” as he called it, for tax evasion. Thanks to the handy work of his lawyers, Frank was released after only serving eleven months. He had also just cleaned house betting on boxer Sugar Ray Robinson. Frank was feeling lucky, and rubbed the belly of Cindy Miller, who was pregnant with his godchild, hoping to pass on a bit of his “Midas touch.” 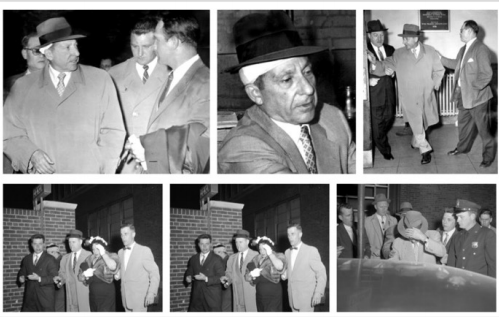 His luck soon changed, however. Frank was only out of prison until higher courts could decide on questions raised by his legal team. A decision on a similar case was expected that day, and Costello’s lawyers believed that decision would set a precedent for his case. During dinner, Frank received a phone call from his team informing him he would most likely be returning to jail. The news hit him hard, but he accepted it as best he could, and returned to the party. They decided to move on to Monsignore, to hear the strolling violins.

The dinner had also been interrupted twice that evening by phone calls from Vincent Mauro. Both times he asked to speak to Miller, who he knew. Mauro wanted to know if Frank was still there. He was running late, but may still make it. Miller told him they were moving the party to Monsignore, if he wanted to join them.

The group continued their evening at Monsignore, but Frank excused himself early. He now had to take a phone call from his lawyer concerning what he was told would be an uphill legal fight. Not wanting to break up the party, he suggested he take a cab home. Phil Kennedy decided to share the ride and left with Costello. Miller then remembered something Mauro had asked him to do. He wanted Miller to call him if

Costello left before he got there. That way he wouldn’t come all the way out only to be disappointed the Boss was gone.

At 10:55pm, Frank’s cab pulled up to his apartment building at 115 Central Park West. He said goodbye to Kennedy, and entered the lobby. As he stood waiting for the elevator, Vito Genovese’s driver, Vincent Gigante, called out that now infamous phrase,

and fired the pistol he had aimed at Frank Costello’s head.

Costello survived the attack. Hearing his name caused him to turn, saving his life. The bullet that would have cut him down merely grazed his scalp, but the message had been sent, and it was one that would send shockwaves throughout the underworld. The shooting had just begun, and Mauro would once again play his part, but the aftermath is a story all its own…

I once had the opportunity to ask someone who knew Joe Bonanno, what Joe’s opinion of Costello was. He told me Joe respected Frank, and being they shared many political contacts, he always had Costello’s back. He then added another interesting insight. Bonanno claimed the whole hit was orchestrated to allow the Prime Minister to retire. This was not the first, or last, time I have heard this theory. Though I do not know if I subscribe to this notion, it certainly warrants further discussion.

If You’re Going to Shoot the King…

Joe Valachi said Vincent Gigante had target practice for weeks in a basement, preparing for the hit he botched on Uncle Frank Costello. This author is grateful he was such a lousy shot.

Special thanks once again to Vincent Arpa, for his research assistance.