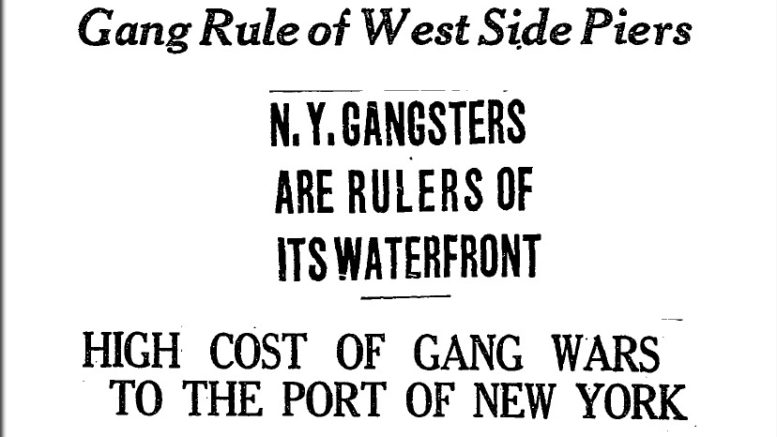 Edward J. McGrath, or “The Big Guy”, as he was known around the docks, started out as a small-time bootlegger during Prohibition. Originally from the East Side of Manhattan, McGrath fell in with a group of West Side hijackers, including his future brother-in-law John “Cockeye” Dunn, while serving a five-year sentence in Sing Sing for burglary. Other key members of his gang would eventually include Andrew “Squint” Sheridan, the Bell brothers, George Daggett, Joe Butler, Robert “Barney” Baker, John “Peck” Hughes, Frank “U-Boat” Kelly, Connie Noonan, Robert “Farmer” Sullivan, and Nicholas “The Bull” Tanzella.

Upon his release from prison, McGrath and his new gang began to stick-up, hold-up, steal, and pinch anything of value. However, with Prohibition drying up, the West Side suddenly became a competitive criminal landscape that consisted of out-of-work hoodlums scrambling for every buck they could get their hands on. West Greenwich, Chelsea, and Hell’s Kitchen became a battlefield, and McGrath and Dunn would play important roles in a gang war that resulted in eleven murders, six near-killings, and dozens of shootings.

When the smoke cleared, McGrath and Dunn had established themselves as a pair of cold-blooded killers. With their newfound power, the two vaulted themselves into leadership positions within New York City’s Irish Mob and, more importantly, on Manhattan’s lucrative waterfront. The Port of New York City was crucial to ensuring that business in the city ran smoothly. With over $900 million in facilities (or nearly $12 billion dollars today), the city had the world’s largest and busiest port with annual revenues of over $146 million dollars (or nearly $2 billion today). Out of the more than seven hundred miles of New York City waterfront, over three hundred had been developed into piers. The Port had roughly nine hundred piers operating in Manhattan, Brooklyn, and Staten Island; over one hundred ferry landings; and tens of thousands of associated businesses, shipbuilding plants, and warehouses. Using their fearsome reputations, the Dunn-McGrath Mob assumed control of many of the key illegal and quasi-legal industries that were connected to the piers. The duo also muscled their way into key union positions within the International Longshoremen’s Association and the American Federation of Labor.

Although the gang ruled the docks with an iron fist, they had been attempting to manage a large area of the waterfront. Working alongside a well-liked former bootlegger named Timothy O’Mara, the mobsters seized control of the Chelsea region without any violence. The seasoned O’Mara had an arrest record dating back to 1910 and had been a member of the original Gopher’s gang, along with West Side prohibition boss Owney Madden. Following Prohibition, O’Mara obtained an interest in a number of legitimate breweries, including West End Beer Distribution, where he kept his prized racing pigeons in a coop on the roof. A true Fagin character, O’Mara was viewed as an underworld emissary by younger hoodlums, and he regularly staked criminal ventures and acted as a fence for their stolen goods.

In the Hell’s Kitchen neighborhood, the Dunn-McGrath Mob had placed a new crew in charge of the region’s docks. Following a short gang war in the late 1930s, the neighborhood had become an open territory. The Dunn-McGrath Mob knew that the chaos in Hell’s Kitchen was bad for business and that a cohesive West Side was needed. With the help of Timothy O’Mara, they approached a group known as the Bowers Mob, a collection of hold-up men who O’Mara regularly bankrolled, and asked them if they would be willing to take over the area.

The Bowers Mob was led by Michael “Mickey” Bowers, a wiry thug who established his stand-up reputation in the underworld after being shot in the neck by police during an arrest for a payroll robbery, and then later taking a ten-year prison rap for the rest of his gang. While the slightly built Mickey was unassuming, the gang’s mouthpiece was his much larger and more boisterous cousin, Harold Bowers. The rest of the gang, who had been stealing together since the late 1920s, consisted of John “Keefie” Keefe, Bowers’ closest associate, who Mickey had met while serving a robbery sentence in New Jersey; John “Apples” Applegate, a Hell’s Kitchen native; and a portly local hood named John “Big John” Ward.

These were men that ruled New York City’s Irish Mob and secretly influenced the International Longshoremen’s Association for over thirty years. To read more about their story and the bloody gang wars that were fought for control of the docks, pick-up Dock Boss: Eddie McGrath and the West Side Waterfront today.

“Not since On the Waterfront has the world of labor racketeering been presented in such an enlightening and entertaining way. Neil Clark presents a fascinating portrait of Eddie McGrath and his waterfront minions, dock wallopers and hoodlums with names like Mutt, Cockeye, Squint, and the Bull. Dock Boss is essential reading for anyone with an interest in organized crime history, the sociology of New York’s West Side, or the long, lost universe of the waterfront rackets, through which gangsters once held sway over the economic fortunes of an entire generation of working men.”
– T.J. English, author of the Irish Mob Trilogy (The Westies, Paddy Whacked and Where the Bodies Were Buried)

“Dock Boss is a fascinating and well-researched look at one of the most influential Irish mobsters of the 20th century. Eddie McGrath was not only the king of the New York waterfront, but a street-smart Irish mobster who stayed one step ahead of the law and his enemies. Neil G. Clark brings to life McGrath’s story with clear prose and a sharp eye for detail.”
– Scott M. Deitche, author of Cigar City Mafia: The Complete History of the Tampa Underworld and Garden State Gangland: The Rise of the Mob in New Jersey

“In his new book, Dock Boss, author Neil G. Clark takes his readers inside the violent world of the New York City waterfront and the man who controlled it. It isn’t a pretty world, but it was Eddie McGrath’s world. It’s a story that needed telling and one you don’t want to miss.”
– Dennis N. Griffin, author of Cullotta: The Life of a Chicago Criminal, Las Vegas Mobster, and Government Witness and Surviving the Mob: A Street Soldier’s Life Inside the Gambino Crime Family Neil Clark
Neil G. Clark is the author of Dock Boss: Eddie McGrath and the West Side Waterfront; the real-life story of the preeminent racketeer on Manhattan's lucrative waterfront and the bloodshed that long haunted the ports of New York City. The book is available now at all major retailers.